The last we saw of Snail Bob he was traveling through a world of point-and-click puzzle fantasy. Now in the cold winter months he's moved on to a much better fantasy in my book... a warm tropical island. But nothing is a vacation for Bob, not with the Frog/Lizard snail-eating tribe after him. Snail Bob 8:Island Story, by Andrey Kovalishin starts with Snail Bob being literally cut away from his bearded elderly grandfather while ice-fishing and finding his way across the oceans back into the warm but dangerous jungle. Snail Bob is an ambitious little fella and is always wanting to move unless you put him back in his shell by clicking on him, or tapping the [spacebar]. You can also turn him around and speed him up, either by using the number buttons or clicking on the icon in the corner. It's your job to keep Snail Bob moving the right way, or stopping him to wait for the disasters to pass. Your other job is to push buttons, switch levers, chase away hungry creatures and much more by using clicking to interact with them. Otherwise it's just one slip that ends Snail Bob's life and that is no way to end a vacation. 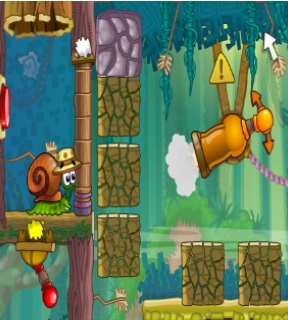 Andrey has Snail Bob down. Usually by the 8th in any game things are getting old and stale but not this escargot. Snail Bob is as peppy as ever with the same level of charm and fun humor as all the others. Snail Bob 8 also has throwbacks to previous games, as well as Easter eggs from famous movies and games. The difficulty of the game is similar to the others where nothing is having you pull your hair out, and those levels that cause a bit more thought can be solved in a few more tries. But that is what we want with Snail Bob... it's not about sweating over your keyboard but enjoying it as a whole. The only difficulty that you may struggle with is finding those optional stars in each level. You think you're so clever little stars?... Well, apparently you are because I can't find a good third of you. Thankfully, the stars aren't needed to get Snail Bob off the island and back home. That's going to take quick clicks, cunning plans, and good aim.