Nothing's quite so thrilling as the Wild West. Open sky, hot sand, and an endless line of desperados in dire need of a bullet between the eyes. This is the world of Witchhunt's Smokin' Barrels 2, a duel-based shooter game where you need to be quick on the draw if you want to survive. Each round has you moving your cursor into the lower left corner to "holster" it for the countdown. When it's time to draw, drag the cursor to a target that appears somewhere on the screen and fire before your opponent does. Bonus damage is awarded for bullseyes but if your opponent is still standing you'll have to do it all over again. To the last man standing goes the loot, which can be spent in an upgrades shop for a variety of fun add-ons including armor, extra-damage bullets, and the odd belt of whiskey to get your cowboy back on his feet. Whatever you do, don't miss. 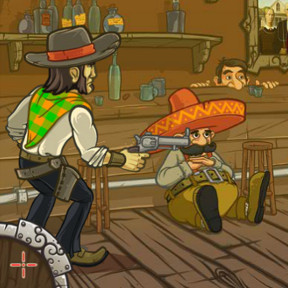 Since Smokin' Barrels 2 is essentially a reflex game it might hold some limited appeal to those of us who aren't quite so quick with our fingers. Even the odd jitter of your mouse can throw off a valuable shot, which can be endlessly frustrating at later levels, so make sure your mouse's sensitivity is at a good level for you. Moreover, damage you take has to be repaired at cost, so you lose money in addition to pride when you get bested in battle. Fortunately, the developers have wisely included a robust upgrades system that can mitigate some of the frustration. You can revisit older duels for a chance at a reduced amount of prize money, allowing to level up a bit before you tackle the boss battles later on. Overall it's a very well-balanced game, sporting some cute art and cowboy music, and a couple pre-duel trash talk dialogue boxes that are sure to induce a giggle here and there. It's all very charming and compelling, a fine example of Wild West gaming. So check out Smokin' Barrels 2 and get shootin' already!

Fun! Totally impossible with a trackpad.

amusing for about 3 rounds, but boy...not much extended-play value.

It's clear a lot of work was put into the graphics/design of the game - it has a lot of potential. To JustMe's point, it's very one-note in that you're just doing the same thing each round. As you progress, I think if you had to do harder things than just hit the target quickly, like maybe hit several targets placed around the screen, or different things, it wouldn't feel so repetitive. None of the levels are really that hard to beat. The bonus games don't add that much - would be nicer if they were more closely integrated with the story line of the game.

Great game. I enjoyed this game a lot.

Did anyone figure out how to use a rabbit in a fist fight? They'd fly by but I couldn't see how one could grab it and use it... I'm also curious if the same method could be used to grab the flying bottles and use them as well.

Click rabbit and bottles.
You will equip them on you hand.
(you have to buy a rabbit in the shop)

Greatly enjoyed this game. The game has a useful upgrade system that rewarded spending wisely. The game had a good difficulty curve and kept me in my toes with the last boss battle. My only complaint is that a few of the missions were a bit overly long especially