Sk-yyyyyy-yyyy Queeeeeessst! Berzerk Studio went out to make a Sky Quest! Don't care how many flying critters have to die just as long as you win the game!... Sorry, when a side-scrolling shoot-em-up comes along featuring an angelic hero named Conquest soaring and defending his airship from the creepy forces of the evil Wartrake, while an epic score blares in the background, it just makes me think of a certain White Stripes single. But after spending some time with it, it makes me think much more of fast-paced shooter fun. Control Conquest with the mouse, automatically firing your weapons against the creatures attacking your sky-fortress. Your hitbox is your head, and slamming yourself into either the creatures or the red ammo they fire will drain your health bar. While the red ammo the creatures fire won't hurt your ship, watch out for when they decide to go kamikaze. If either you or your ship run out of health, the level is failed. 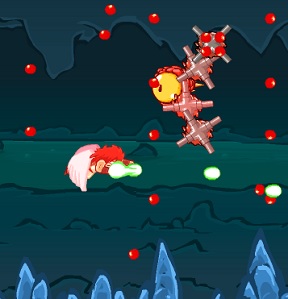 Blasting enemies will grant you both cash and experience, both of which can be used to upgrade you and your ship's equipment and defenses. New items in the shop can be unlocked by collecting magical orbs, and there are also special uncommon items that become available for sale every five real-time minutes. Defeating 100% of the enemies on a level or completing enough in-game missions will give you a bonus star that can used to purchase skills that can be activated with [1], [2] or [3]. Collecting enough stars will grant crystals that can upgrade your current items, be crafted into rare or legendary items. Sky Quest has a huge world map, with several subquests to dive in to, so don't expect this adventure to be over in a single sitting.

Sky Quest has a bit of a front-loaded learning curve, especially before you unlock the stores and spells and all the customization opens. Plow through to your first magic orb, though, and the game world opens up to an impressive degree. Sky Quest has a lot of features that will be recognizable to players of other Berzerk Studio games: gorgeously designed enemies, intriguing gameplay that manages to stay just one step of addiction ahead of feeling repetitive, a somewhat overwhelming array of gameplay options, an epic score, and a gratuitous amount of testosterone. Actually, Sky Quest could use a dose of Berzerk Ball 2 or The Peacekeeper's rakish humor, since for a game about an angel-with-muscles laser blasting cacodemons, the plot is played strangely straight. Still, Sky Quest is a glorious time-sink that will keep those looking for engaging mindless entertainment successfully engaged, entertained, and de-minded until the final firework is exploded.

Actually crashed shockwave plug-in twice before I gave up trying.

That's strange. Sorry you're having problems! I can verify it loads fine for me on both Firefox and Chrome. I assume you tried a restart, or clearing your cache, and made sure your browsers and plugins were up to date?

So, I managed to get myself into a position where progress is basically impossible.

When I sold the starting weapon, I figured it would be no problem to buy an equally crummy weapon to replace it. However, I soon discovered that the store was only offering weapons better than the one I currently had, which I couldn't afford.

I thought it would be better to play with two worse weapons than one good weapon, since I'd get the doubled rate of fire. I sold my only weapon, figuring it would actually start offering me the cheaper weapons again. No, it turns out the store refuses to offer you any options that aren't better than the best weapon you've ever had. So now I have no weapons and I can't afford to buy any of the ones the store will offer me.

Since I have no weapons, I can't shoot at all. This makes saving up to buy weapons … difficult. It would be nice if the store would always offer the cheaper guns. There could even be one really crappy one that was free.

The game mechanics are fine, but I think in the long run this game is going to be a little too grindy. Upgrades come slow, as does the currency to buy them.

Lots of neat side stuff though, like upgrading your weapon and the ship.

Actually, this first came out back in April on NotDoppler.

Yes, we're well aware, but it recently received a large updated and was finally made available for hosting in the process. :)

So um I beat the game (on normal) with 3 locations untraveled and one discovered, but not played yet. Though I cannot seem to open those areas either. Maybe i need to beat all the challenges? Yeop, you have to beat the challenges. Last one not opened yet, not sure if I have to beat the survival or just the map before it. Not gonna try, had enough grinding.

Death was easy with a laser and lightning weapons, so was the 39 difficulty levels. Just had to avoid getting hit

I preferred rare weapons and items to any of the regular ones offered.

Everything costs too much, so upgrade slowly

No real bonus for beating boss levels, that sucks.

On challenge mode, what is the number above the last reward? Whether it is a crystal or a skill point, it has a number. Is it just the level difficulty?