As of this writing, the Freebird Games website is experiencing heavy load! You can download the game directly for Windows from here.

Remember To the Moon? The spellbinding narrative adventure game from indie developer Freebird Games? Well, a) you should because it was amazing and there's a sequel coming, but b) even if you don't because you haven't played it, you can still get a bit of holiday cheer with the free short adventure SigCorp Holiday Special. The game stars Eva and Neil, the protagonists of the original game, who have the rather unusual job of working for a corporation that modifies the memories of people who request their services... sometimes to make a wish come true in their final moments. But this time around, it's just another day at the office, albeit with some seasonal mischief in the air... 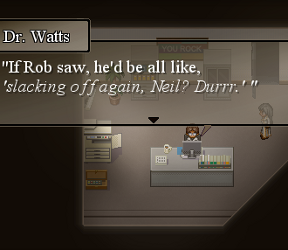 All you need to do to play is click, since both Eva and Neil will follow your cursor when you do so and interact with objects lit with a sparkle the same way. Alternately, you can move with the [arrow] keys and use [C] to interact. The only thing you really need to remember is that there's no save function, so you have to play it all in one go, but given the game's short length, that won't be a problem if you have a half hour to spare. Like To the Moon, there's not really any puzzling to be had, and all you basically need to do is follow the story as you explore SigCorp HQ as both Neil and Eva. Make sure to talk to characters multiple times!

Though it is, in part, a cheery and goofy holiday game meant to ease the wait between now and the sequel, fans will still find a lot to like here. It gives you an extra glimpse into Eva and Neil's world, expanding on SigCorp and the people who work there... as well as what other people might think of them. Freebird Games has always excelled at writing, and here they manage to infuse a remarkable amount of warmth, humour, and depth even in characters we've never met before in just a few lines, managing to make their detailed little sprites extremely expressive. The game sort of takes a turn for the... uh... weird at one point, with an odd minigame that might wear out its welcome for some. Still, its an appealing if fleeting glimpse into the lives of people a lot of us came to care about a lot over the course of To the Moon, and as a lead in to the upcoming sequel, well... you'll laugh, but you'll get chills too.

Fun thing to do:

As Eva, you can enter your own office and check the diary on the table, prompting her to hide it. If you DIDN'T do this, later when you control Neil, you can go in and read the entire entry!

Fun thing to do

As Eva, you can enter Eva's office and check the diary on the desk, prompting her to hide it. If you DIDN'T do this, when you later control Neil, you can go in there to read it!

And remember to check out the sign next to the toilet.