In Artogon's creepy hidden-object adventure Shiver: The Lily's Requiem, you play Dr. Thompson, returning to the sleepy town of Blackwill after 17 years. Things get weird in a hurry when, on your way to your first night on the job, you stumble across a girl passed out in the street. She begs you for your help, claiming to be the daughter of a former patient of yours who has been comatose for years, but there's something hunting her that doesn't want you interfering. Lured off into the night by a strange siren song, she needs your help before it's too late! So go collect a bunch of pearls to decorate your office. And find some items for your fish tank. And crack open this random tin to solve a puzzle to enter your own office. And play Battleship with this mechanic. But other than that, saving her is your priority. Despite suffering from an abundance of backtracking and having shed most of the horror elements fans of the previous games in the series might be hoping for, Shiver: The Lily's Requiem still blends urban legends and classic mythology in new and intriguing ways for a gorgeous adventure with a diverse and meaty amount of puzzles and hidden-object scene variants. 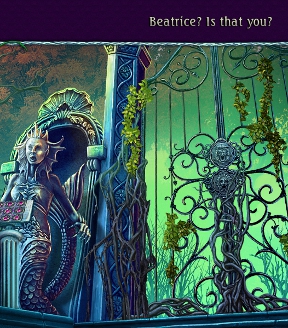 One of the best things this game has to offer is variety. Puzzles abound, many of them with creative implementations, and you'll even get to play a game of Battleship. Hidden-object scenes have different list formats to keep things fresh, from silhouettes to list formats where all the names are scrambled, and you'll travel to a lot of different locations to boot. That said, The Lily's Requiem is practically heaving with busywork that starts to grate early on. You need, for example, at the very beginning of the game, something inside a box. Only the box is locked with a special elaborate puzzle code lock even though it contains a vital piece of puzzle equipment. And the code is hidden in a high place. And to reach the high place you need to repair a ladder. And to repair the ladder you need to find something to hold the steps in place and then something else to hammer it in. Within the first five minutes of the game. There are so many instances like this, and even the game sheepishly pointing out how "odd" some of it is doesn't make up for it. Look, game, I'm already putting up with your freaky CGI cutscene people and crazy lip syncing... let's not push it. 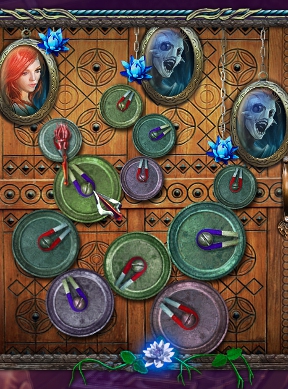 The Lily's Requiem also dispenses with nearly all of the creepier horror elements and atmosphere from the previous two titles in the series, going for a more fantastical thank freaky approach. The story really is genuinely interesting, with some appealing twists on classic myths and legends, though its tendency to reveal things in brief fits and drop random plot bombs makes it harder to immerse yourself in it. Once the game moves past the first two areas, however, things begin to pick up considerably. You'll learn more about what's going on and begin to actually have a role in it, with a lot of wonderfully creepy-cool moments and even some interesting characters and mystery. Though as mentioned the CGI work in the cutscenes tends to look out of place, The Lily's Requiem is still a gorgeous game, thanks to a dark and dreamy quality to its art and environmental design. It's a title that probably needed paring down rather than padding when it comes to a lot of its gameplay (I need to break a lock to look into the uncovered bed of a truck?), but also one that manages to be more mystical and imaginative in ways that will appeal to players who don't enjoy jumpscares or more oppressive horror. Despite its rough edges, if you give it a chance to snare you with its song and judge it on its own merits rather than comparing it to Vanishing Hitchhiker, Poltergeist, or even Moonlit Grove, Shiver: The Lily's Requiem is still a creative and captivating title well worth checking out.