To Sherlock Holmes, Mr T was always the Tea Shop owner. This chronicler has seldom heard him mentioned under any other name, most likely to prevent confusion with the Rocky III guy. In his eyes he eclipsed and predominated the whole of his tea-making profession. So it was to our mutual dismay when Police Inspector Jason Bartholomew came round and informed us of his ghastly murder. The poor man had apparently been drowned in a giant cup of his own tea! And not even the good stuff! This cannot stand! Come! the game is afoot in Sherlock Holmes: The Tea Shop Murder Mystery, a short point-and-click adventure from the folks at Carmel Games. 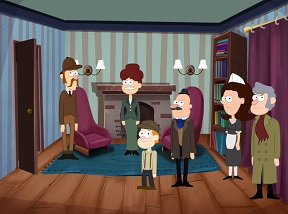 Click around to interact and pick up items or talk to a person, and click on something once it's in your inventory to use it or to combine it with another item. Leaving an area will take you to the map screen, and new areas to travel to will become unlocked as the game goes on. Sherlock Holmes: The Tea Shop Murder Mystery isn't exactly the most faithful adaptation of the Conan Doyle canon. In terms of investigative competence, let alone voice-acting, Cumberbatch, Brett, Downey and Rathbone are way out in front, with Detective Grimoire only slightly behind. It's a work that's designed to appeal more to fans of the author's other works rather than of The Sacred Writings, as it were. But with that in mind, there's quite a bit of fun to be had: the acting is campy, the puzzles are goofy, the humor is silly, and it comes together to make a charming, if breezy, ten minute romp. And if, like the great detective, you need brain-work or else will fall back into your seven percent solution habit, then deciding to play Sherlock Holmes: The Tea Shop Murder Mystery should be... well, let's say "rudimentary".

Talk to the paper boy. Get the newspaper. Go right to go back to the map.

Click the button corresponding to who you think committed the crime.

It was a suicide: the murderer is the murder victim, Mr. T.

I can't seem to get the game's page to load. Tried Chrome and Firefox. Other games work fine, but this one just loads the top portion down to the first banner ad and stops.

Same for me as well. Chrome, Windows 8.

Yeah, it's busted. It's posted elsewhere, at Kongregate and a few other sites, though (no link as I don't want to get flagged as spam!)

Same problem as all the above. Can´t load this game.

Hi folks, we're aware of the issue and will have the game up and running as soon as possible. Thanks!

I played this back when they first released this not too long ago. The only problem is...

As it is, there doesn't seem to be a penalty for accusing the wrong person.

Sorry for the bug. It's fixed now.

carmel games rule. :) looking forward to the walkthrough when it is ready :)

I suppose no one has had a chance for the walkthrough yet?

I haven't even had a chance to play it yet, nevermind writing a walkthrough. :(

Talk to the paper boy. Get the newspaper. Go right to go back to the map.

Click the button corresponding to who you think committed the crime.

It was a suicide: the murderer is the murder victim, Mr. T.

Cute game. One problem with the walkthrough I'd like to point out..

Mr. T did not commit suicide. He was trying to commit insurance fraud when he accidently killed himself.