Look, I'll tell you right now, whenever I die, in whatever fashion (hummus overdose?) I want whichever one of you who finds my body to leave evidence in such a way as to suggest I might have been struck down by a malevolent supernatural entity. It's just more fun that way. In Eipix's hidden-object adventure Sea of Lies: Nemesis, you've been called in to examine a death that the authorities have ruled "natural causes", but the victim's friend believes that the paranoia the deceased exhibited before he died might point to a more sinister truth. The adventure that unfolds is what we in the professional business affectionately call cray-cray, as you deal with poisoned parakeets, murder suspects who are missing fingers, dirty double-and-triple crosses, and hysterical ladies who are oddly keen to tell their life histories and hand over valuable artifacts to strangers who show up on their property without introducing themselves. A sort of supernatural whodunnit that fans of classic murder mystery camp like Murder She Wrote will enjoy, Sea of Lies: Nemesis combines solid point-and-click gameplay with flamboyant and vibrant production for an unexpectedly enjoyable game that's a welcome respite from the darker and more serious titles. 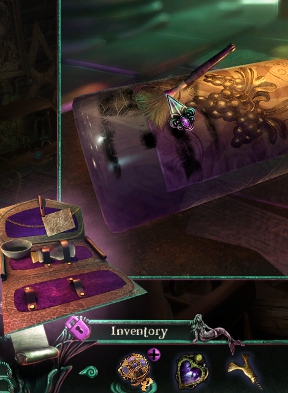 The thing that most comes to mind when describing Sea of Lies: Nemesis is variety. Hidden-object scenes can have multiple modes of play, from puzzles to silhouette hunts and more, or you can just turn your nose up at them and indulge in a match-3 minigame. Not all of the item uses are entirely intuitive, however, unless you're the sort of person who typically turns corks into drawer knobs, and some are extremely convoluted. Why yes, I frequently have to hunt down ribbons and scissors to fashion grass into brooms to clean up grass! Still, it's forgivable because the whole game is so deliberately over the top from plot to puzzles that it's hard not to get sucked in. The biggest problem is actually a lack of feedback, since "Think, think, think" and "Let me see" don't really provide any indication of what you should be doing, or why something isn't working. But hey, if you get stuck, just whip out the old fingerprint kit, or steal some gloves off a dead body. He ain't usin' 'em, and I promise you there's lots more bodies where that came from! Each "chapter" of the game comes with a little revelation at the end that adds another twist to the plot while also tying up some of the clues you come across, and the whole thing is just so delightfully handled that fans of mystery stories will really enjoy the story.

It should be noted that while Nemesis has clearly had a massive amount of effort put into its presentation, the character speaking animations are, eeeehnn, creepy in an Uncanny Valley/Possessed Jim Henson Puppet sort of way. At the same time, however, Sea of Lies: Nemesis is so overflowing with detail and colour you'll stop noticing the character animation after a while. The voice acting is, on the whole, very well done, and the soundtrack unexpectedly robust and varied in a genre that typically makes do with one or two tracks for the whole game. Most players will likely find the length average at around four hours or so, depending on how you customise the difficulty, but if you're sick of grim, dark games and want something energetic and vibrant, do yourself a favour and check out the demo. Despite the quibbles with its gameplay, Sea of Lies: Nemesis is a top-notch hidden-object adventure that is well worth a look.

You lost me at "demo"

Why is that, Gabe? Both a full version and free demo are available.

Because it's not a full game

I suggest you look at the other freeware and online flash games we've covered then. :) I always advocate people try the demo before the full version of a game we review so they can see for themselves what it's like rather than buying the full game first. We always review the full games of the paid games we feature on the weekends, but recommend people try demos first.

Thanks for the review! This looks like fun - gonna check it out! :)

where is a walkthrough -- bigfishes one does not help i am stuck!