One... get a hold of a box. Two... put a cat in that box. Three... don't ever open that box, because you never know if it might be dead. Created for Ludum Dare 30 themed around "Connected Worlds in just 72 hours, point-and-click puzzle game Schrödinghost, by looPing and Valmont de Ragondas with graphics by Carduus, stars you as Maru, Schrödinger's long-suffering cat, who is really sick of all these experiments. Maru wants to seek revenge on his master, but that's a problem since he's stuck in a box, and if Schrödinger sees him moving around, he's dead. Your job, then, is to click to move Maru around whenever Schrödinger isn't looking, avoiding the sphere of light around Schrödinger that denotes his field of vision and make it to the opposite side of the screen. (Don't worry, if you mess up, you just restart the stage.) Being sneaky will only get you so far, however, so by clicking on Maru, you can release his spirit as a ghost which allows you to manipulate switches and travel through electrical sockets while Schrödinger is none the wiser. 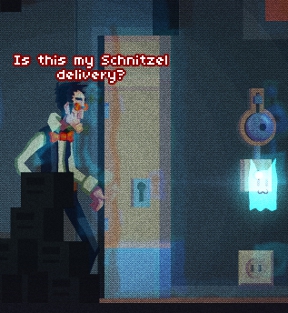 It goes without saying that Schrödinghost is extremely good looking for a game with such a short development period, and the sense of humour is welcome as well despite a tendency to fall back on being crass for no real reason. Schrödinghost also doesn't provide a whole lot of direction, neither explaining that travel through electrical outlets is even possible, or the objective of the final level, so you're left to flail around until you figure out what's happening. Despite this, and its short, silly length, Schrödinghost has a ton of charm and is a great idea, if a somewhat familiar one, and one that definitely deserves to be fleshed out a little further. It tied for fifth position in the Ludum Dare 30 voting, and it's easy to see why voters loved its style and concept. Will we ever meet up with Maru again? Only time will tell... just make sure you don't open that box.

Very clever! I love the concept and it's a cute and funny game.

I seem to be stupid at this. I think I'm only on the third screen - there's a radio and a red switch that releases a drumstick. I can only make it halfway across the screen, and I end up stuck with the dude right on top of me. Hint?

Actually, I can get to the end of the screen, but it's not letting me past - like there is something more I need to do?

@baileydonk, you need to be on

ah. did you notice

the electrical outlet where the drumstick was?

Yes, I did notice that - but all it does is let me move back and forth, I can't do anything new, can I?

Power of posting, not sure how I finally got it to work right... Thanks, prairiegal.

I'm stuck in the same place as baileydonk. Did all the things, but can't exit.

Hello! You're not actually trying to exit.

Once you eat the meat, you should be able to go into an electrical outlet behind where the meat was, which will fry the radio and send Schrodinger back to his space beneath it. Pop back into the empty space through the outlet, and it should turn into an anvil. Then it's just time to enact your revenge...

It seems a little short. I would've liked to see one or two more levels with this mechanic. I'm also a little disappointed we don't get much of a reaction when

Schrödinger steps in the mess the cat leaves behind after eating the meat.

I think this a funny little game, but I can't decide whether it's perfectly short or not long enough. The music was great, as well.

Also, I think there is a typo or maybe my brain just works differently,

Maru says "I can connect to the word of the dead." Shouldn't it be world?

hyperspeed, I think you're right about the typo. Also it's missing "the".

will a walkthrough be coming soon?

There wouldn't be too much of a walkthrough, it's pretty short. Anyone who's finished could post one if that's allowed, but most of the levels are mostly when to move.

This game is really enjoyable, with original puzzle solving and a great concept! I only wish this highly original game were a little bit longer because I enjoyed these aspects so much:

-Funny dialogue and a clever plot.
-Really wonderful music and sound effects!
-Beautiful artwork and smooth, pleasing mechanics make this a joy to move around in.
-Original game mechanics, not like any other game I've played.