Kelly just wants to prove that she's a good sister, without doing all the work, of course. So when her younger sister, Zoey, wants to go to a haunted house on Halloween night, after some pressure from their mother, Kelly agrees to take her. But not too far in this cult-themed spook house Zoey gets too scared and runs off only to turn up missing. With the help of a worker who seems to know more than he's letting on, Kelly must find her and along the way find out this pseudo-haunted house is a lot more real than she once thought. Created in just 48 hours, Saving Zoey, by Kaleidofish and his many teammates, (r-bit, Doran, Geckos, Auro-Cyanide, Chocojax, Railgun, Phrostylicious Productions, Nathan, Thestral, and Cirno) is a free indie visual novel with a horror theme that can let even those with weak hearts enjoy because it keeps itself creepy without the jump scares. It's the atmosphere that will really suck you in as you try to make the right decisions to save your little sister. With three endings and plenty of game over screens you'll have to tread lightly and find out the right steps to get a better ending. 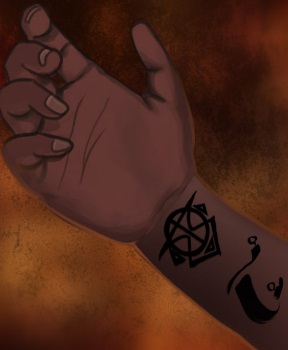 Saving Zoey has what every visual novel with multiple endings should have... a great save option and a skip button. Going back through the game, it can be a pain to click through all the dialogue when you've already seen it, but the skip button will race through all the dialog you've already seen and stop when you get to something new. Which you'll want to read, since while the artwork is fantastic, the game is told through the writing and the interesting story it crafts. Some of it can be a little graphic, and there is plenty of gore both in words and even in the pictures. Not Corpse Party bad, but enough that it may turn some stomachs. It's the music that really sets the tone, so have the volume up, and with no screamers you won't have to worry about becoming deaf with no warning. There are a few places where you must mash the [spacebar] to keep yourself from failing, but it's not very challenging, and you actually have to try to lose at it if your heart desires to do so. But the game isn't about that... it's about solving mysterious and finding your sister. Saving Zoey is a great haunted tale for those who like the build up and not the pop ups.

Linux: Get the free full version

I was surprised to hear "a great save option and a skip button" are should-haves rather than staples. Maybe because I'm used to Japanese visual novels? There, even branchless visual novels will have dozens of save slots, quick-save, a backlog, skipping, and auto-read.

Thank you for the review! A small correction, though, kaleidofish was only the Lead Writer & Story Designer. The game was by an unnamed team that also consisted of...

It wouldn't have happened without all of them!

Regarding the multiple endings,

If I've found all three like I think I have, none of the options are particularly good.... although it can be interesting to see the different paths you can take to get there

Getesda,
Guess I've just been playing all the wrong ones. ^^;

And Kaleidofish, sorry about that! We try to make sure credit goes where credit is due and I thought that was the groups name. I added them all in. Thanks for letting us know!

Meh. Reminds me too much of Harvester.

Either you give up, or you go evil. If you choose to not give up and try to not go evil, you go evil anyway, because the villains have magical brainwashing powers/because that's all the dev bothered to program. Gray areas are unacceptable, after all--giving in to evil in the face of an immediate threat makes you a puppy-kicking monstrosity! Oh, and becoming a puppy-kicking monstrosity means meekly serving the folks who corrupted you, rather than slitting their goddamn throats!

I too was bothered by the endings in the beginning. After all we want so hard to succeed and it just doesn't seem to be fair that what we believe to be a real happy ending, isn't possible.
That being said though, I feel like Saving Zoey did what most horror stories have too, by not giving us the ending we want. If there were always happy endings then there would be no fear, no anxiety, nothing to keep us up at night, which is why we read/play/watch horror, isn't it?

With the 'good' ending being you becoming brainwashed with your sister leads to a chance to a sequel as well. That and it makes it more real. As much as I want to believe in a zombie apocalypses I'd be all chainsaw and kick butt, I have to realize that I can barely bring myself to squash a spider and would probably end up huddled in a corner sobbing till one of them finally bit me out of my misery. I doubt I could do much being surrounded by crazed cultist when all I have is a trick knife.

As with Harvester, that is a game I feel had a point to make and really flubbed at doing so. But that's a rant for another day.

I played the version posted on lemmasoft, and I'm not sure if it's been significantly updated since.

Anyway, I wasn't bothered by

the lack of happy endings. I actually kind of liked that even if you found the hardest possible ending, that wouldn't necessarily mean that everything worked out alright. What did bother me, though, was that

I felt the cult brainwashing ending didn't make a whole lot of narrative sense. Video game cult brainwashing doesn't need to be the same as real life cult brainwashing, but 1) Kelly knows the cult is about as horrible as you can get by her current morals, 2) she doesn't have any needs that the cult can meet (at least when Zoey lives - I can actually buy that when Zoey dies, Kelly might need the reassurance that she didn't fail her sister), and 3) it didn't seem like it would actually be that hard to get away! The cult constantly moves around from place to place, so Kelly would probably get an opportunity to run for it. I could believe that the brainwashing happened, if I'm told how it happened, but it's a little disorienting to just be told that it did happen, and that's that. It felt like it was putting the no-happy-endings cart before the satisfying-writing horse.

Nevertheless, it's a gorgeous game, it's creepy as heck, and it's got the whole atmosphere thing down perfectly. Saving Zoey wasn't a perfect game, but it was definitely a good one, and reaaallly impressive for something that was created in only 48 hours.

I put off playing this for a little while because it's a visual novel, which usually means lots of reading - something I have to be in the right mood to do, considering I'd rather read a book than a screen.

But this one isn't too bad. I reached an end in about 10 minutes, even though it felt a little rushed.

I stupidly trusted the guy who sounded a little incompetent, and should have realised something happened to his little brother when he used the past tense in discussing him.

But oh, let me just follow his instructions to our doom.

Here I was, thinking I'd be smart enough to survive a horror movie.

I'd like to imagine that if you play through all the endings, then can go back to the start and have an option to remain the worst sister by not driving your sister over to the haunted house in the first place.