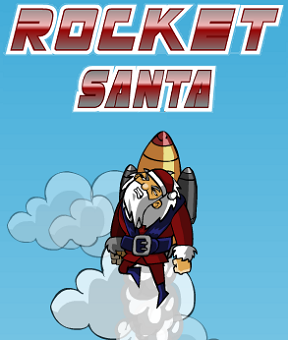 It is the year 2019. Alien war rages upon the surface of the moon. But would Santa dare forget those space marines that made it onto the "nice" list? By Kringle's beard, I say thee nay! Even it if means strapping a rocket to his back and launching himself to space, ol' Saint Nick will deliver those gifts if its the last thing he does! Berzerk Studio brings you Rocket Santa, and he's burning out his fuse up there alone. While not particularly innovative for the arcade launch genre, Rocket Santa is a solid game that makes up for its slightly seasonal pandering with its sense of humor. The look on Santa's face when he runs out of fuel is hilarious, and, call it sadistic, but one just has to laugh after seeing him in a crumpled pile after a failed lift off. It's just a small stocking-stuffer of a game, but it's sure to bring you a little holiday joy.

even with everything maxed, I don't even see any extra fuel tanks or boosts on most runs. that doesn't seem right.

I managed to beat it with less than half of the upgrades bought. It was fun for a few minutes but winning so easily meant there was no reason to strive to get all the upgrades. Since that is the core element of a launch game like this, it seems like a lot of wasted potential simply because it was too easy to win.

It's like the bonuses aren't active on every run after you buy them. I didn't have any trouble beating the game even with that, and I like that you can keep playing even after you reach the moon, I guess to see how high you can get. I topped 111K and I think I'm calling it a day.

Fun game, but it needs achievements so I can feel better that my time was well spent.

Thankfully I found a bug where Santa's scream no longer played.

Aside from the mentioned issue with boosts/fuel not showing up, Santa should have a better hit box for collecting items, as there's been several times I almost completely cover a coin with Santa's head and he doesn't pick up the item.

My main complaint is that a lot of luck is involved in whether the bonuses appear (boost lanes, fuel).
I did feel a certain sense of accomplishment in getting high enough that Santa's plummeting yell runs out.

I agree. The fuel upgrades and coins were just...not enough at times, I went whole runs with only picking up a few coins, never seeing a fuel can or a boost. And the fact that boosts and fuel cans were grouped together meant you kinda had to choose one or the other sometimes. It was amusing though.

An interesting quirk - if I turn sound effects off, I still hear the rocket noise.