Angels and demons both permeate and fascinate western culture. Alawar Games has taken this allure and poured it into their epic new adventure and hidden object hybrid, Sacra Terra: Angelic Night, and wow, did they ever deliver a fantastic game! 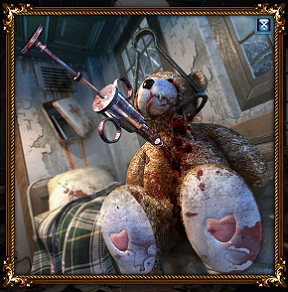 Sacra Terra: Angelic Night begins as you wake up in an insane asylum, unsure of why you are there or how you arrived. Pretty soon it becomes obvious that (a) this is not your standard psychiatric hospital, and (b) something extremely bad has gone down, as there appears to be no living soul in the complex besides yourself. As you wander through the nightmarish scenery you gather hints as to what has happened from notes, newspaper articles, and a sad angelic presence who pops up every now and then to point you towards another clue. Once again mankind has been meddling where they shouldn't have and has unleashed demons in the form of the seven deadly sins, poised to take over the world unless you can stop their dastardly plan in its tracks.

As you wander around you begin to realize both the scope of the madness that has been unleashed and the size of the asylum, which is not one building but a whole complex that requires a lot of ingenuity to explore. The standard adventure/hidden object hybrid trope of a changing cursor allows you to distinguish between areas that demand a closer look, items that can be picked up, locations where you can travel, and just interesting scenery that can be remarked upon. Items found either in the locations or in the hidden object scenes go into a large inventory until you can find a use for them later. Articles, clues, and the like will go into your handy notebook to allow you to keep track of the ever expanding story as well as information that may become important later. Sparks of light (and cascading sparkles) point out areas of interest or hidden object scenes, at least in the easy mode of the game, and a handy refilling hint timer points out both unseen hidden objects and adventure objectives. 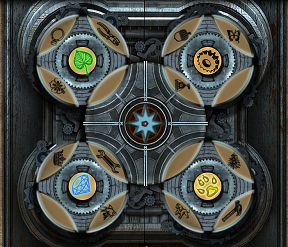 Along the way you will encounter your angelic friend, the demons portraying the seven deadly sins, as well as a lot of hidden object scenes, mini-games, mini-puzzles, and problem solving. Each puzzle solved and each scene decoded leads you deeper in the heart of darkness and the mystery that surrounds this surreal, nightmarish facility. With only the hints and clues to guide you (there is no voice acting and very little dialogue present) you must fight to the end, whatever the cost, to save both the world and the poor angel who is guiding you.

Analysis: Wow. Just wow. This is one of the best, most elaborate adventure hybrids to come out this year. With the emphasis squarely on the point-and-click adventuring Sacra Terra: Angelic Night is a mind-blowing throwback to the days of yore in adventure gaming with its engrossing story, stunning visuals, and — most importantly — depth of gameplay. 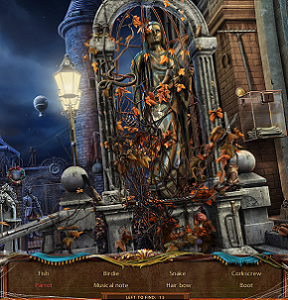 Alawar has created a world which is fascinating to explore and difficult to leave, and the combination of beautiful, otherworldly scenes juxtaposed with the grim, haunting asylum proper makes the entire experience surreal. So much attention has been paid to the details, from the torn-apart, blood spattered hospital rooms to the ethereal cathedral, and from the grim character design of the deadly sins to the haunting angel, the player is tempted to slow down even further just to bask in the glory of it all. The atmosphere is enhanced by the haunting background music and the faint incidental shrieks, groans, and pleas of the damned that echo throughout the facility. With no cheesy voice-overs to break the mood, this is one game that will suck you right into the story and never let go until the final curtain has fallen.

What sets Sacra Terra: Angelic Night apart, though, is the fantastic gameplay to be found within. So many hybrids on the market today tend to pad with either tons of hidden object scenes, tons of puzzles, or both. Not so here, as the bulk of the gameplay is squarely centered on the adventuring side of things, with hidden objects and mini-games being more of a side dish than the main course. Just wandering around and exploring, the heart of the classic adventure game, is the main draw here and depending on the mode of play you choose (easy or advanced) and how much you take advantage of the hint system (and the built-in strategy guide in the Collector's Edition), you may be looking at a whopping six to ten hours of gameplay, not including the "extra" adventure available in the CE. For any causal adventure hybrid these days that is pretty stunning. What makes it even better is that it is almost all meat, no filler.

There are a few minor items in the game that may bug dedicated hybrid fans. The translation of some hidden object list items is a bit chancy (using "toy truck" for "toy car" and the like), and there is some minor repetition of the same items in different hidden object scenes (like the spool of thread being used over and over again). Another problem is some questionable use of found items, most especially needing to find a video tape (and a VCR) to use with an old film-reel camera. However, this is a very small complaint and many players might not even notice if they get caught up in this epic story of good and evil. The only other warning would be this: despite the different modes and difficulties, this is not a game for the entire family. From the opening scene with a bloody teddy bear stabbed with a hypodermic to the name-checking of Sacher-Masoch, Sacra Terra: Angelic Night is definitely not a game for the under 8 set, unless you really want them having both nightmares and questions about "Venus in Furs".

Alawar has done fantastically well with Sacra Terra: Angelic Night. The game is engrossing, gorgeous, atmospheric, and most importantly hefty beyond belief. This is one adventure hybrid that lives up to the grand old games of yesteryear in terms of both visuals and gameplay. Definitely worth checking out, but make sure you have a bit of time first because you're not going to want to stop once you begin the adventure.

Nice game, but the angel appearing every 5 minutes and whispering "Angel..." - yeah, cool story, sis. We all know you are an angel! :/

i cant have the key from chapter 6
in the graveyard ,wath can i do can you help me.
love pooh

Hi, pooh :) I'd be happy to help you, but I need a little more information. Which step in particular are you having difficulty with?

In the Graveyard, there are a few things you have to do in order to get the Key, first make sure you:

If you have done all of that, you should be able to find the key. Please let me know if you have any more trouble!

i am not able to figure out where the eternal flame is??

angelicteresa -
Check Chapter 6 of the walkthrough above the comments.

You need to light the lamp in the Crypt.