After fighting back against the undead warriors and reclaiming their land, everyone thought that it was finally time for peace. They were soon proven wrong on all accounts as for rumors spread across the kingdom as new portals were appearing and leaking out the evil warriors once again. But the Royal Army isn't retreating like they did before. They're heading right into it to shut it down before things go from bad to worse. Idengames is back with Royal Warfare 2. With the Grand Wizard Corvinus being able to teleport in allies it's up to you to strategize the battlefield, build your army, and make sure all your men come out alive in this real-time defense game. Every level you pick and choose which man you want to use to battle and when the waves are arriving you can order your troops forward or back depending on where you need them. Make groups by using the control key and what number you want to label them as and set up defense lines to utilize each unit to the best of its ability. Unlock new powers, win stars and gold to upgrade your army, and clear the land from this blight before it claims you. 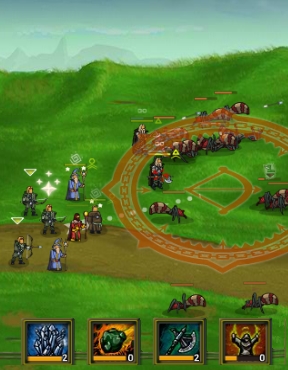 There is a lot going on on the battlefield at all times. Not only are the enemies waves more like what you'd see in an actual war and less of a few stragglers wandering around, but all units have their own special abilities. Some are stronger against magic types, others can deal great damage to armor, and some units even get a bonus when fighting alone. You have to really be on top of things and remember who does what. There is a pause button you can use at any time to re-organize your units, though they won't move to where you tell them to until you return to the games, but it's a good way to take a breather. You can also, once the cool-down is finished, remove units from the field and put in new ones. The units you call back can then be placed back into the field when the wait time is over and their health and armor will be restored. There is also a way to make the lesser enemies units fade out a bit so you can really focus on the bigger bad guys who can tear through your squad if you're not too careful. Even with all these ways to help, though, your units can be a little hard to control as they are so small it's hard to keep track of who is where. Also, watch your hot keys and your self-made groups as occasionally they choose not to work which can be a bit of a pain. In the end, Royal Warfare 2 is not a game you can just call in troops, dump them and leave them to do their own thing. It really is all about strategy and takes a keen mind to find what is best. It's a challenge fans of the defense genre will love.

Fun... but I liked the first one better. Still a VERY solid web game.