Princess Loreen and Prince Nathaniel got off on the wrong foot. Sure, you can't blame them for being cranky. I mean, they both woke up to discover themselves captive in a dungeon. That would put a damper on anyone's mood. And the way they (inadvertently and hilariously) foiled each other's initial escape attempts doesn't seem too conducive to a happy relationship. But if you bring your point-and-clicking A-game, you should be able to ensure that these two crazy kids get their happily ever after in the Orchid Games adventure Royal Trouble. 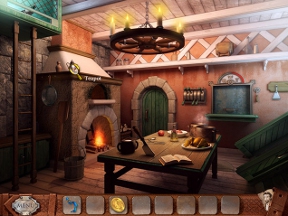 Your ultimate goal, of course, is for both Nathaniel and Loreen to escape. Most of the game consists of fairly logical inventory puzzles, with occasional mini-games. For example, you might pick up a hairpin, and in a lock-picking mini-game pick a lock to a cupboard with it, and then take the dog food within, combine it with a sedative from your inventory, and use it on a guard dog in order to sneak past him.

There are no inexplicable hidden object scenes where you are for some reason compelled to discover a rubber duck, a toothbrush, and a ladies' fan, yet only one object amongst the multitude is actually added to your inventory. Nor does the game fall into the trap of placing objects where they have no business being (why is there a hammer in the bathtub?). No, Royal Trouble has only a few hidden object scenes, and they involve things like finding unbent nails... in a chest full of nails. And a certain set of dishes... in a china cabinet. Because of this, they take a much keener eye for detail than the typical hidden object fare. If this doesn't sound appealing, don't fret; all puzzles and mini-games are skippable with no penalty. Simply wait until the skip bar fills and click it to skip. Be careful not to click outside of a puzzle window, however. This backs you out of the puzzle altogether and resets it, which is good if you're doing certain puzzles and you think you've gotten stuck, but frustrating if you were almost done. 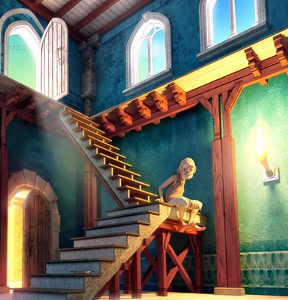 Analysis: If you're familiar with Orchid Games from its romantic Heartwild Solitaire series, you should know that there isn't a bit of purple prose to be found in Royal Trouble. No one swoons, no one clasps anyone to a heaving bosom, and dark and stormy nights in which white shirts cling alarmingly are right out. That said, if you don't foresee a romance between Nathaniel and Loreen from the first sparks of their bickering, you're obviously skipping the dialogue. It would be easy for the plot and character to fall into dull stereotypes. Although the game does flirt with them, from "feisty redhead" Loreen to would-be "knight in shining armor" Nathaniel, the snappy dialogue keeps things humorous, and the characters actually learn from their boneheaded mistakes and don't make them again (or at least, make new and entertainingly fresh mistakes). They actually develop believably as people and learn from their experiences.

The hint system deserves particular praise. Click on the book in the lower right whenever you need a nudge. First it will tell you your immediate goal. Then, as you ask it for more help, it will gradually reveal more and more information until finally it tells you explicitly what to do next. You never have to exit the game to hunt for a walkthrough on the web, because it's all right in game. The game also includes an excellent checkpoint system. In the main menu, click on "options" and then click "load game". The game will show all the checkpoints you've passed. When you've gotten to the end of the game, there will be 23 checkpoints. You can click on any checkpoint to play from that point, if you want to relive a certain cutscene or puzzle.

Royal Trouble is a light and casual romp in the tradition of more "hardcore" point-and-click adventures like the Monkey Island series. Players in search of an amusing script with memorable characters and looking to solve some logical puzzles shouldn't miss out on this escapade.

Thanks to Jazz for writing up this walkthrough :)

I seriously enjoyed this game. I managed to beat it without clicking the hint button once. I hope Orchid is planning a sequel.

A cute little game, definitely. However I had trouble with

It says in the recipe that you must use Tears of Pegasus, i.e. the blue potion, twice but that is not correct. Instead you must use all 3 potions once, so that they interconnect. Only then will you get the required yellow potion.

Thanks to Jazz for writing up this walkthrough :)

Hi, would someone please tell me where the curtain tie back is in order to combine with the rope to climb the tower? Any suggestions would be greatly appreciated. :)