Rosslyn: The Templar Mystery is a captivating first person adventure game that is packed so densely with riddles, a dozen of them are staring you in the face from the very beginning and you'll barely even realize it. Taking place inside the Rosslyn Chapel (made popular by The Da Vinci Code), you have nothing but your grandfather's cryptic notes to leaf through as you wander around the chamber looking for clues. It's a challenging experience perfect for anyone who likes a good riddle! 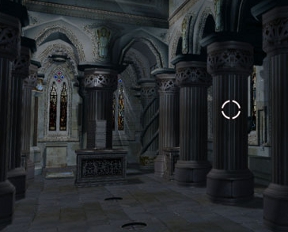 The Rosslyn Chapel holds a grand secret, a treasure the templar knights have kept hidden for hundreds of years. To find out what that is, you must solve the temple's mysteries. Your grandfather worked on these secrets his entire life, leaving a number of notes in a diary. They're rather vague, however, and must be deciphered before they're of any use. Not only that, but puzzles in the temple can't be solved in any order, there's a specific pattern to them that you must also decipher. A riddle, wrapped in a mystery, inside an enigma indeed!

Rosslyn: The Templar Mystery is a game where you'll spend more time staring at an in-game text and scratching your head than you will be actually doing thing inside game world. Standard first person controls apply, allowing you to walk in four directions using the [WASD] keys and look with the mouse. In addition, you have a number of ways of interacting with things on the screen, accessible by scrolling through them using the mouse buttons. Need to slide something up? Choose that action and click. Need to rotate something? Choose the circular arrow and click. It's simple, but, of course, that's not supposed to be the challenge, anyway.

To start, bring up the diary and flip through its pages. Read the notes. Look at the drawings. Take in the scribbles on every piece of parchment. Then, look around the temple. Don't just glance, take a good, long look. Notice a sculpture or a pattern that's similar to something in the book? You might. Now you just need to figure out how the two relate, then you can get to solving. Really cool people will love taking advantage of the online version of the diary as well as the printable PDF file. In-game content in real life? Neat! 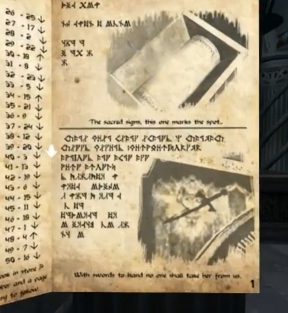 Analysis: Rosslyn: The Templar Mystery is a fantastic blend of modern first person adventure gaming and good old fashioned riddle solving. The puzzles are flavored something like you would find in Myst or, for something less mainstream, A Fool and His Money or Fract. Those riddles are what will draw you in, and only fans of deciphering complex clues will find enjoyment in this placid game of mystery.

The Templar Mystery is a short experience (if you're handy with the riddles), and the reward for solving each of them is little more than a string of text informing you the puzzle has been solved. Not exactly the kind of fanfare most modern gamers would expect, but the reward shouldn't be fireworks, it should be satisfaction. And Templar Mystery delivers plenty of that, as every step of solution is worked out by your brain, so when that string of text does appear, it's all you, baby!

If you want a challenging game that looks good, sounds great, and is filled with the kind of puzzles that are so puzzling, they're right in front of your virtual nose and you'd never know it, Rosslyn: The Templar Mystery is definitely something you should dive into!

This looks pretty great and right up my alley, but I noticed that the site says this is version 0.1. Does that mean it's unfinished?

Number 8 is killing me.

Look above the door to the left.

Can't get a thing to work, and the guide isn't much help when every time I try to click on it, it goes flying about. No tutorial. Obviously it isn't a widespread problem since others have been able to play the game, but since there is no help documentation regarding gameplay issues, I'm stuck.

[Please contact the developer about that. It's most likely a false-positive being thrown by your AV. -Jay]

@Zazazu:
You don't click on the journal. Just use the arrows (A and D) to flip through it. Move the mouse to move the journal around. Read the first page to find what page you need to look at for each puzzle. Nothing will respond to clicking unless it's part of the puzzle, so just look at the pictures in your guide to see what's important.

Anyway, this game is not bad, but it has plenty of room for improvement. Making the journal move around was pointless and distracting, since the whole thing fit onscreen. Also, it was tedious and annoying to flip to the index, and then flip to whatever page the puzzle was on, particularly since you'll do this at least 50 times. So the whole journal mechanic should have been streamlined.

Also, this game seems to think that repeating the same puzzle several times makes it harder. The biggest offenders here are the things you slide on the wall, and the faces on the pillars (which compound the annoyance by being very difficult to distinguish). This game could be a lot shorter without missing any of the good bits. Some of this recycling was benign, like the sliding tile puzzle, which has 3 distinct uses. However, a lot of it was just the same puzzle 4 times.

Overall, I liked the music, and I liked the scenery, and physically moving objects around in different ways was nice, but the puzzles just aren't entertaining.

A game like this isn't about entertaining puzzles, it's about the feeling that you're exploring a place that was meant to be found, eventually, when the time was right. Having to re-do puzzles just makes it feel like all parts of a giant combination lock, you gotta know how to feel out the tumblers and when to press.

Totaly ok game for a freebee. 2 hours killed, now i can sleep.

The read-me has other helpful keyboard shortcuts for the diary: Home for the first page, End for the last and Page up and down to skip 4 pages.

It took me ages to realise that the right mouse button did things!

I can't believe this, but I'm stuck on number 3. I can't find anything remotely star-like anywhere, except perhaps the tops of the two pedestals, but I can't find a way to change the shape of the images in the oval indentations.

I have tried several times last night to download this game because I am very intrigued by this game and would love to play it, however each time I download it then to unzip its contents I have a warning from my computer security that there is a Trojan virus with in the downloaded data and it is removed and deleted automatically. WARNING this game has a Trojan virus in the download.
Is there a safe version of this game? I would really love to play it (virus free of course)

How can this problem be fixed. I want to trust this site, I would love to play this game but there I keep finding a virus attached to the download.

Never mind, I'm an idiot, I didn't notice the central pillar markings. I wish you had a flashlight in this game.

Silouette, what AV are you using? I ran it through Microsoft Security Essentials and Malwarybtes Anti-Malware, and found nothing. It's most likely that your AV is giving you a false positive. What trojan name did it give you?

I'm stuck in 8 too! I even found the crosses and did something, but the game still hasn't told me that I've solved the puzzle. Is this a glitch?

@octohan: It is not a glitch.There is one more step

You should look at the crosses on the floor

Use the up arrow on the rings around the bottom of each pillar to block the face shown in the diary.

Whoops solved it while after.

Turn the pillars to get the needed characters

put the tiles with number III in the center of all four 3x3 puzzles on the walls.

played it all the way through and loved it, cant believe it was free, think i'll donate a few pounds their way.

Still stuck on number 8, I just can't seem to get anything to do anything!

Somebody help me.I'm actually stuck on number 4.Where is that 'sacred sign' anyway?

"Use the up arrow on the rings around the bottom of each pillar to block the face shown in the diary."

Puzzle 28. Bottom of page 2.
"The cheats face betrays us. Stop its gaze from falling on our form."

There are 3 faces on each pillar. You need to identify the face shown in the diary, then block it. There are rings around the bottom of the pillars that you can raise to cover the faces. If I remember right, the faces weren't exactly clear even on the higher resolution so you may want to raise the resolution if you haven't already.

I am also stuck on number 8. I found the crosses in the two locations mentioned in above posts but when I click on them nothing happens

First time user of this board. Late starter on this gae. Stuck on #8, in spite of previous clues. Anyone working this game these days?

Up to #26. Guess I'm the only one working this puzzler at this time. Some nice hints on a well-known video site.