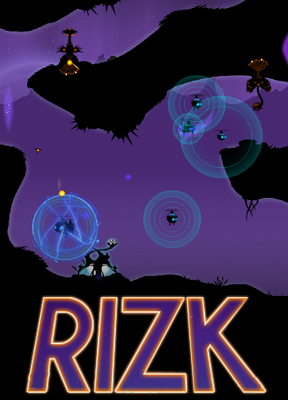 The fate of a plant lies in your hands. With dangers lurking on all sides, your army of flying robots are the only barrier between blooming into destiny or facing botanical oblivion. It's also a message about climate change and makes for a pretty neat tower defense game. Feel ready to Rizk one for survival?

When a seed meteors into the ground, it finds itself in hostile terrain. Nasty-looking plants sit nearby, easy to provoke by the slightest bit of resource gathering. Given that it appears our plant is the alien invader, one could suppose the evil plants were just defending their turf. To beat them all and advance, the plant has to grow to full maturity. It gets this done with local resources, gathered across the level. There are three types: slurpers draw resources from underground reservoirs, catchers get resources from falling fluids and breezers snatch the air. Each of these, however, agitate the local plants, who in turn retaliate with pollen.

In step your trusty robot chopper things, the so-called defenders. Also in three flavors, they deploy shields that stop the pollen. Take enough hits and they lose a shield, damage that you can repair and an ability enhanced by upgrading the unit. The resource gatherers can also be upgraded and repaired, but they (and your plant) need the protection of the defenders. Defenders can be placed anywhere, but the resource gatherers have specific areas where they fit. Click the right mouse button brings up a radial menu from which you can build.

With each level you can asses the threat by choosing another option on the menu, bringing up a risk assessment of the map. It shows how likely certain plants are to attack and where the resources are located. During the game the view is cropped more closely, but you can zoom out. Money is earned via the resources, so the trick is to gather enough so that the war coffer is kept topped up and the defenders have shields. 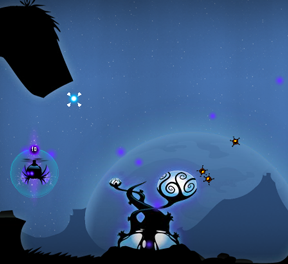 Analysis: Technically this is an educational game, teaching about the need for resource balancing. That much is obvious with the three resources, which essentially represent fossil fuels, hydro power and air power. In reverse order is the magnitude of payout: oil gives far more than air. But to balance that it also agitates the plants a lot more and depletes quickly. It is easier to go for air, slow yet unlimited, and not upset the natives, but in later levels the assaults become relentless and you have to swoop around, grabbing resources smartly and quickly.

It's an interesting formula that draws similarities with the resource management theme it represents and certainly makes for one of the better edu-games around. That's because it hardly has much to teach, but makes for an intensely fun tower defense game. A Facebook link-in also means that you could plug your account in and compete on the leaderboards. Finally, there's no closing this off without mentioning the nice graphics. It's a game made with a budget, and it shows.

If one criticism comes up, its that you will go through at least two thirds of the game before you are forced to play smartly. Obviously the challenge is heightened if you want to compete on score, but even at a laid-back pace it makes for a fun bit of gaming.

No save feature? Seriously? I can't believe a game that is this polished and this long to play doesn't save. It's a beautiful game, but that's a dealbreaker for me; I'm tired of playing levels one and two repeatedly every time I close my browser (or Flash crashes).

@keith The game uses Flash Shared Objects to save your progress if you are not connected via Facebook. Hope that helps.

i felt the same about the save feature - i didnt actively connect via facebook, does it do it automatically? i only got as far as 5 levels, but i really enjoyed the game and the graphics were great :)

What if I don't have a facebook account? (And no, I'm not creating one. It's a conscientious boycott.)

It won't save via flash, even though I've made sure to allow data storage in the flash settings. I also verified I'm running the latest version.

This is a bummer, because I really enjoy the game.

How long should it take to load? I've been letting it load for 30 min. now and it still says "game loading". On a mac but I don't see how that would be an issue here. Any suggestions?

It's not saving for me either. And you can forget about me logging into facebook as well.

Flutterby, it took a long time for me to load as well, but more in the neighborhood of 2 minutes. You might try restarting.

I felt that this game was a little too difficult. wether I played aggressively or cautiously, I found that I was always short on coins to keep my defenses up to task.

too cautiously, and I wouldn't have enough gatherers to earn enough coins to keep up with the defense's use of coins.

too aggressively, and I would have the gatherers I needed, but my defenses would fail just as the resources reached the plant, shortly thereafter, the gatherers would be destroyed.

It doesn't really do a good job of expressing how "risky" something is, because the risk is usually 0 until you start extracting and wake up the plants.

Also, I'm surprised that you found it so easy. I found the challenge quite acceptable, and my coin supplies were stretched to the limit by the end of each level. Since there's always at least one plant awake before you've even built anything, the "slow and steady" approach doesn't really help.

As for strategy, I found that it was best to just use Bleeps for defense. Beats have really weak shields and you don't need the wide area, while Blocks are just too expensive. Put Bleeps in choke points or directly on top of troublesome plants, and you can contain even the most deadly plants.

@keith @ollygirl @Tsuken There does seem to be a problem with the saving but a NEW version with five more levels will be out in a day or so and the saving will be fixed. Thanks for the feedback.

While Beats have low shields, its range can be made into an offensive weapon if you have to make sure that nothing passes through - do remember that any pollen in a shield range is completely destroyed if the player repairs the defender. The added bonus is that any pollen destroyed this way does not damage the new shields!

I usually find a good set of Bleeps and Beats to be better than any single 1 themselves - Bleeps tend to easily let pollen slip by if not set at a good choke point, and Beats are very player intensive. Both of them are far better than Blocks though, especially for the repair prices!

Level 4 is so danged HARD!
I did find something out, though:

If you have an extractor to the left of a plant, while you are to the right of it, the plant will send spores after you. Even if you have shields and the extractor is closer, the spores will still attack you.

But they CAN attack your extractors in other cases...which really sucks.

And please spare me all these facebook connections. Not Want! (And for my friends and collegeas, its great what you all can accomplish in these games when you should be working, but please spare me to tell me on facebook how much pigs your virtual farm has, how many kills per second you can do, or your uberl33t highscore).

The game itself is interestingly different. I wonder on some mechanics tough. Selling a block and rebuilding it is in total cheaper than repairing it? Why? I'd wish these defenders would somehow slowly replenish themselves. Also the defenders are flying entities! So why cant i move them? (with some cost if it must)

Eventually I dont see the "Risk" aspect covered well. Its pretty sure what plant will give you what impact.

Just to say all a new version have been updated on the Science Museum Site including 5 more levels and the level saving has been fixed.

Ugh the risk map is useless. There needs to be a before-> after thing when you build collectors to indicate the kinds of threats you are waking up when you build.

Also this game is less about threats and more about juggling. Your goal is to really get an extractor down, throw down a shield, then upgrade or trade in the shield JUST before it breaks, and replace it with a new one in time to block the incoming spores. I find its usually best to upgrade once, then trade in so you aren't constantly replacing it (and you still only lose the 10 gold for trading it in)

On the other hand, your extractors are FRAGILE. Two hits and BOOM end of game. Losing one extractor is practically losing the game. I got to level 7 before I gave up on this game. It punishes you too hard for any mistake (including not building fast enough as threats are active before you start and you are eating spores or you are spending money on shields which are only protecting you until you decide which extractors to place, where to defend them, etc.)

This is the best Flash game of 2011, hands-down. The art is stunning and the gameplay (as of the Febuary update) is deviously fun and expertly fine-tuned.

I would gladly pay $20 for a longer campaign if the devs ever choose to expand this into a commercial game. Keep up the awesome work!