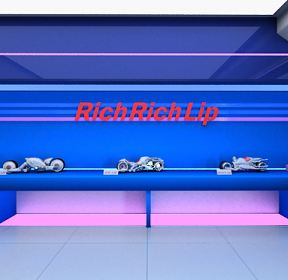 "Get your motor running, head out on the highway, lookin' for adventure, and whatever comes our way..." Visions of scenery flying past in a smooth ribbon, wind whipping through the hair, the gentle purr and throb of the engine, motorcycles have long been associated with a sort of wild freedom and adventure, so it's rather poetic that they have become the central theme to Bianco-Bianco's newest room escape, Rich Rich Lip, which features several bad-boy, tricked out motorcycles that could have come straight out of Neo-Tokyo.

Rich Rich Lip features a nicely rendered three dimensional space in which to explore along with the aforementioned road hogs and some tricky and amusing puzzles, all accompanied by a throbbing, kick-ass soundtrack that makes the gamer feel as if they were flying down a highway to nowhere while actually being stuck in a rather small room. A changing cursor indicates hot-spots and cuts down on the pixel hunting, while easy navigation bars allow for smooth movement about the neon-decorated space. There's even an homage (read: rip-off) of Tesshi-e's customary happy coin, two escape scenario endings. Unfortunately, there's not a visible save feature, so to get both escape scenarios you have to play through twice.

Bianco-Bianco, author of the Dr. Ichie series of escapes, and of First Love (a collaboration with Robamimi), has jettisoned their usual themes of either sentiment or horror and just gone with simple, stripped down room escaping with no theme other than the pretty, pretty bikes. Rich Rich Lip is not a long escape, but one that is an amusing break that will get the heart thumping along with the road-rage music that would fit in beautifully with a capsules/clowns rumble. Let's roll!

Thanks to grinnyp for the walkthrough!

Thanks to grinnyp for the walkthrough!

I can't seem to get it to load. I tried on Firefox and Chrome. I'm currently using Windows 7.

Well, after a crazy amount of waiting and reloading and a little more waiting, it finally loaded. It could be my connection today, I don't know.

How is the "NaN" message a clue? It doesn't seem related to any of the actions that follow. It just seemed to me to be an artifact of sloppy coding. "NaN" is an abbreviation for "Not a Number"; it's a special value generated by floating-point arithmetic routines to indicate that they have been given inappropriate values (for example, dividing zero by zero) and have generated an invalid result. See the Wikipedia NaN article for more than you ever wanted to know about NaNs. :)

Why do you think that is supposed to be a clue? The only time I got "NaN" is when I entered something invalid into the calculator (for instance, if you enter a number and then press "equals" without providing an operator and another number).

There's a bit of moon logic going on here. Why did I need to

use pliers to bend the paperclip?

Seems most of BiancoBianco's older works are offline now. :(

[Thanks for letting us know. We'll get them all fixed! -elle]

Well, the link finally works, but now I'm getting stuck. Whenever I combine the two heart halves, both items become darkened out, but no new complete heart item appears.

DAM, I have the same problem, the heart does not show up after you close out of it., so I cannot finish the game.

Having the same problem as DAM and SHA. No full heart in the inventory after you combine them...-_-'

Looks like all of Bianco Bianco's games have disappeared?

seems to be a glitch in the game

when I put the 2 half hearts together, it shows I have a complete heart, but when I x it out, the complete heart is not in my inventory.