Great, you've been called into work early. Well, at least you finally talked to that cute girl on the subway. This small victory is cut short however, when you get to the lab only to find your brilliant physicist boss has been the victim of a mysterious explosion. Was it an accident, or is someone after his Resonance research, which has the potential to change the world? Perhaps someone is trying to prevent the research from reaching the light of day? Enter Ed, the mild mannered scientist, and Anna the intelligent doctor with a troubled past. Meet Ray, the nosy investigative reporter, and Detective Bennett, the good cop... or is he? Fate pushes these four unlikely heroes together in Resonance, a classic style point-and-click adventure by xii games and Wadjet Eye Games, of Gemini Rue fame. Can the gang solve the mystery and recover the research? Or is one of them responsible for the crime? 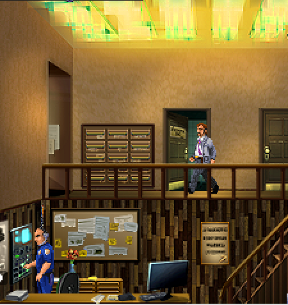 Any adventure game fan will be familiar with the basic controls of the game. For those new to the genre, simply click to move your character around the screen, click on an object to try to pick it up or otherwise interact with it, or right-click on an object for a detailed description. Click the inventory button to see what your character is holding, or to grab an object to use it to interact with the environment. Unique to Resonance are the the long and short term memory options. When your character has an important conversation, it will be stored in the long term memory. You can open this menu and revisit these conversations at any time, or click them during a dialog to talk about them with other characters. Short term memory works in a similar way, only you drag objects that may (or may not) be important, from the environment into the short term memory slots in order to bring them up in conversation with others at a later point in the game. Also singular to the game is the ability to play as all four characters, using another menu at the top of the screen to decide who you'd like to be.

Analysis: Resonance takes old-school, wraps it in a great story, and spits out a wonderful game with unique mechanics. The graphics wouldn't be out of place in any of the old Sierra adventure games in all their pixely glory. The memory options add a dimension and difficulty that a lot of point and click adventures are missing these days. The game is fully voice-acted, which is done well and really brings the characters to life. Detective Bennett is voiced by Logan Cunningham, well known in gaming circles as the voice in Bastion. The story is not totally linear, which is nice if you get stuck. If you do find yourself out of ideas, you can have the four main characters ask each other what they think should happen next. This can give you vague hints as to what you are supposed to accomplish next and how. The option of changing characters keeps the gameplay fresh, and there are parts of the plot that can only be completed by certain characters. Also several important scenes can be solved in more than one way. This is made even more interesting by involving some tough moral and ethical decisions in your choices. 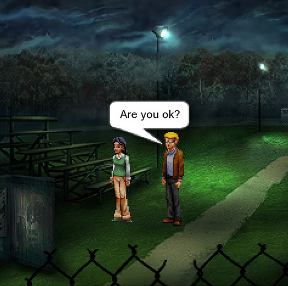 There are achievements included with the game, accessed through the main menu, but you aren't made aware of when you accomplish them, so they aren't really a driving force in the game. To get all of them would require playing the game through a second time, as some are linked to the different ways to solve puzzles. It would be nice to be able to change the resolution from the option menu, as I had an issue with it fitting on my screen without changing my monitor's resolution. There were also a couple times when I loaded and wished I could skip through a cut scene I had already watched. But these are minor complaints. The music throughout is very atmospheric, and adds to the moodiness of the game, while the unraveling story line will keep you coming back to find out what happens next. There is also a handy auto-rewind system, should one of your characters not make it through a tricky situation. So no worries if you're not a save-all-the-time freak like me.

All in all, Resonance is an excellent game, as one would expect from Wadjet Eye. It is challenging enough without being frustrating, and captures the nostalgia of the original adventure games perfectly, while adding a modern touch. Did I mention there are two endings depending on your choices? And that the game conveniently auto saves before the final scene so you can go back and experience them both? There is a lengthy demo available, but with over ten hours of gameplay, it's definitely worth the purchase price.

He throws his cans away in the trashcan. Look in the trash and take the can. Use the swab on the can.

Search for "A Batra".

591 (It's viewed upside-down when you look at the bear)

Getting Inside Juno Labs

Use the coins in your inventory anywhere you want to mark a passage to keep from getting lost. This is especially helpful at intersections.

Javier's Credit Records and Will

The vault is on B8

Getting into the Vault Room

If Javi was Anna's father, like he said, then your "Father's Tombstone" is really your uncle's tombstone.

"Te promoto" (which means "I promise you")

Use the Subway Map.

Use the door and pick "Knock once," "knock four times," "knock twice," then "stop knocking."

He throws his cans away in the trashcan. Look in the trash and take the can. Use the swab on the can.

Search for "A Batra".

591 (It's viewed upside-down when you look at the bear)

Getting Inside Juno Labs

Use the coins in your inventory anywhere you want to mark a passage to keep from getting lost. This is especially helpful at intersections.

Javier's Credit Records and Will

The vault is on B8

Getting into the Vault Room

If Javi was Anna's father, like he said, then your "Father's Tombstone" is really your uncle's tombstone.

"Te promoto" (which means "I promise you")

Use the Subway Map.

Use the door and pick "Knock once," "knock four times," "knock twice," then "stop knocking."

As a note, some of the names/passwords/file names change each game, so they won't necessarily match the ones supplied in the walkthrough.

Also, with the keypad to get into the lab:

There's an easier way. A *much* easier way. It just involves a little teamwork and some physical exertion. I shamefacedly admit I did it that way :(

"Vault Plans" section, how do i get to the Alley? There's no such place on the map. You skipped this part?

You have to have the conversation between Bennet and Anna first; they'll then go to the alley on their own without you needing to use the map.