Redemption Cemetery:
Curse of the Raven

After a car crash one night, you regain consciousness in a strange cemetery that doesn't seem to want to let you go. But the spirits are restless, and if you can help the disquiet souls that linger around the nearby graves, you just might find a way to escape Redemption Cemetery: Curse of the Raven, the new point-and-click, hidden-object hybrid from ERS Game Studios. 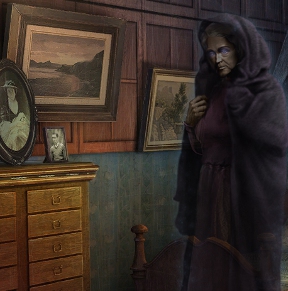 If you're easily frightened, well... don't be. Ghosts, it turns out, are pretty whiny, and are less about haunting you and more about, "Waaaah, I'm dis corporeal," or "Waaaah you need to rescue my child who I could not save in life" or "Waaaaah I was murdered". Man, we've got problems too, okay?! I missed Gordon Ramsay on TV last night, how do you think I feel? But if you want to escape back to your normal fleshy life, you'll have to attend to their requests by delving into their pasts. There are three ghosts lingering within the cemetery that need your help, and you can bet their problems are a bit more complex than setting their DVR or walking their dog.

Gameplay is your standard pointy-clicky affair, using the mouse to interact. The cursor will change whenever you move over certain places; an arrow means you can navigate to a new area, a magnifying glass means you can zoom in, and a skeleton hand means the cruel inevitability of life has finally caught up with you and you've lost the game. No, just kidding; the hand means you can pick whatever it is up. Useable items appear in your inventory at the bottom of the screen, and you can click to pick them up and use them. Hidden-object scenes can be found by keeping your eyes peeled for cascades of sparkles, and certain interactive areas will gleam periodically to catch your attention.

Analysis: Clearly someone in the pantheon of hidden object games lately has our number. We've seen a veritable flood of comparatively morbid and spooky titles recently. If the game looks and sounds a bit familiar, it's probably because you've played the PuppetShow games, which were made by the same developer. Redemption Cemetery shares the same high production values, with beautifully drawn scenes and an appealing soundtrack, peppered with atmospheric bits of ambient noise. Actually, I was mildly impressed when at one point, a whispery voice seemed to be saying "faaaaan beeeeelt", which was in fact something I needed to use, but after a closer listen it's just saying "eeeee-vil". Same difference. 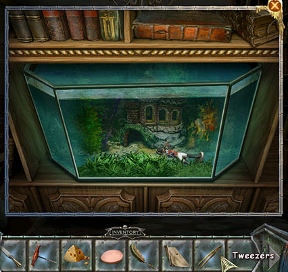 I enjoyed Curse of the Raven; the environments are interesting, the art is beautiful, and the premise of helping lost spirits is a solid one. But it just feels like it would have been so much better without all the frustrating and tedious back-tracking and scene repetitions it makes you go through. It's not a particularly difficult game, but you just really get the sense that certain scenarios and puzzles are strung out and made more complicated than they had to be just for the sake of stretching the gameplay. I know a big source of discontent has been the unfortunate rise of "ever-shrinking gameplay", but shouldn't a game be long because the strong is interesting and involved rather than because you had to collect a screw, a candle, an albino bumblebee and a five-legged puppy just to open a locked drawer?

As it stands, you can probably expect to spend upwards of four hours on the game, more or less depending on what the kids call skillz. If you've been wanting a game to keep you busy for a while, and tales of ghosts delight you, then Redemption Cemetery: Curse of the Raven will make for a satisfying evening or two of spiritual problem solving. It's like Quantum Leap, only with less Scott Bakula, and more rooting through messy bedrooms.

A Collector's Edition is also available. It contains a bonus story that takes place immediately after your escape that will probably add around another hour or so to your play time, and adds some context to the rest of the game. Also included are wallpapers, soundtrack, strategy guide, and more. Remember that Big Fish Game Club Members pay only $13.99 for Collector's Editions (or 2 club credits), and collector's editions count 3 card punches of 6 total needed for a free game.

This is a very fun, very long game. And the extra gameplay in the CE adds about another 25% more to the game. Totally worth it.

I was REALLY hoping for one of your wonderful walkthroughs. No luck, though. I'll hopefully finish before you get to it.

This game really ran slow on my computer!

Cant give the man by the stage coach the smelling salts. Yes, he already has the other medicine in his hand.

I can't get the safe to open either! Very frustrating.

I can not open the safe i keep using the code 4172 but it will not open I can,t go any further
until the safe is open. Can some one PLEASE HELP me

you should actually be going l, r, l, r and remember that you need to STOP on each number and actually release the mouse when you do so, so that the game registers you've selected them. I figured this out because I instinctively went to the left first; the guide seems to have it wrong.

I'm sorry you guys are having problems, and I hope that helps.

when i started to play novella 3 where the doctor was killed I was suppose to have a hidden game come up when i went to castle the 2 time to get a chain from it the game never came up so now i don,t have the chain to go on can someone help me.

thank everyone who helped me finally crack the safe.

brilliant well thought out game. Evocative artwork and sound, with good puzzles, not as hard as some other games but complex enough to have me reading the odd walkthrough! loved the idea of ghost whisper style helping characters - and i would have done that anyway, not just to get out of the cemetery!

To Dora: Thanks so much for the tips re: the safe. It was driving me CRAZY!

Thank you so much Dora, I was really frustrated and thought I had tried everything. Since I have the 3rd Novella also, I was soooo happy to get that safe open. Thanks again.