Ask any town planner and they'll tell you... three out of five planned city expansions are derailed by exploding heads and screaming winged skeletons, which is why every building contract has that lesser known "emergency time traveling ghost busting" clause to take care of things. In ERS Game Studios' hidden-object adventure Redemption Cemetery: Clock of Fate, being tardy earns you more than just a lame reputation when the underground train station you were hurrying through hurtles you back through time to the 1940s during its construction. Seems a bunch of people died mysteriously while the place was being built, and while the police have called in paranormal investigators, that doesn't do you much good when you're trapped in the crumbling construction zone. But between all the skulls, creepy dolls, and the fact that the place is being built on an old asylum burial ground, maybe the city should reconsider this project. If you want to survive to tell them that, however, and presumably leave the world's most epic nasty Yelp transportation review, you'll need to help the lost souls of the asylum find peace. Hunt for the items you need to solve puzzles, gather things in hidden-object scenes, and of course, rewrite the course of history to save the wayward souls from a torment of their own devising. All of which sounds like a lot of pressure for someone incapable of making a train on time, but, well, okay. 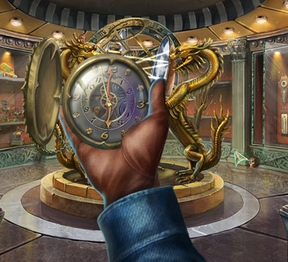 Elements like needing to click and drag to open drawers feel a little gimmicky when motion control is otherwise not implemented elsewhere, but Clock of Fate still plays very smoothly. You've got your fast travel map, your fully customiseable difficulty, your collectibles, your fiery pits of doom... everything standard that makes a good hidden-object experience, down to the option to play a puzzle in lieu of those hidden-object scenes if you don't feel like scavenging through garbage. The actual puzzles you'll encounter are sort of a mixed bag. Figure out the date of a man's birth and death on his tombstone using tiles, okay. Climb down a rope by matching random glowing symbols, bwuh? It's the sort of thing that feels like it's there to fill space, like there's a quota Clock of Fate is trying to reach, so not every puzzle is as interesting as the other. A lot of the spirit's predicaments feel randomly set up to cram in extra obstacles at the expense of making the characters seem a little dense... if you're old enough to be studying biology and history, aren't you old enough to recognize that playing bouncy ball on train tracks over a bridge outside a crumbling station at night isn't the best idea? Still, you can't fault a game for trying to give you a lot to do, unless you're a cantankerous jaded game reviewer, and throughout its meaty playtime (around four or five hours for the average player, not including bonus chapter), there's a lot to see and do. 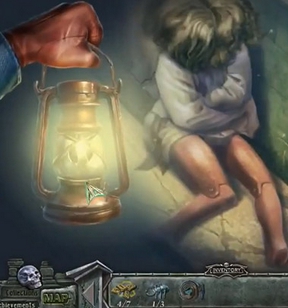 It doesn't hurt that Redemption Cemetery: Clock of Fate is maybe the most genuinely creepy and over-the-top installment in the series. Previous installments went for a more mournful, introspective tone of storytelling, focusing on missed chances and regrets, and while Clock of Fate does have that, there's also the aforementioned screaming winged skeletons and exploding heads within the first minute of play. The art here is absolutely gorgeous, though the apparently random use of CGI characters versus hand painted ones in some cutscenes is a little weird, and the blend of the otherworldly with the mundane in every environment makes them a lot of fun to explore. The time traveling concept actual works with the story pretty well as you work to undo some fairly gruesome things. The scene with Rupert and Ivy, before you're sent back to fix it, is actually sort of shockingly heavy and gruesome for a casual game, both in concept and execution, so caveat emptor. Still, while the game might be a little dark for players who prefer their hidden-object adventures a little less, um, morbid, it does make it feel like your actions have real consequences, and as if you're actually helping right horrible wrongs. Redemption Cemetery: Clock of Fate is a gorgeous but macabre hidden-object adventure that won't be for everyone, but with great storytelling and plot twists and spectacular sights aplenty, it's a more adult approach to the genre than we typically see, and is definitely worth checking out.