It seems that modern science isn't all it's cracked up to be. Where are our jetpacks and hoverboards? Why can't we organise amoeba fights? Luckily, Red Extinction by Veewen is the next best thing: it's an arcade shooter in which you're in control of a microscopic creature fighting off hordes of other, equally minuscule organisms. Every level brings hordes of more advanced enemies, equipped with better weapons, more hit points and a nastier attitude. To defeat them, you'll have to keep upgrading, choosing among a myriad of additions, from spikes to cannons to rockets. 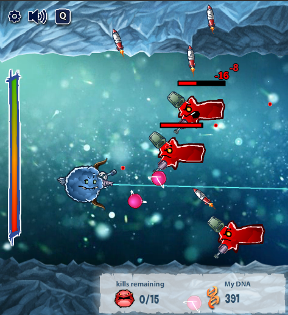 The gameplay is as simple as a paramecium: equip your little fighter, start level, shoot a lot, celebrate. Between two levels, you can improve your stats such as health regeneration and poison damage as well as buy upgrades for your various weapons. Red Extinction is undoubtedly inspired by Spore – the weapons system and its implementation will seem instantly familiar. This similarity is employed in a very creative way; not only is there a vast number of upgrades, which makes the game very versatile, but there are also special drops (look for the creatures wearing crowns). At the end of each level, you're asked to choose between two weapons, and you can replay levels to expand your arsenal. All this, together with the fact that you gain DNA even if you fail a level, lets you experiment with different tactics and combinations and keeps the gameplay fresh and engaging. A word of warning, though: Red Extinction could trigger that little OCD voice at the back of your head that won't let you quit before you get all the upgrades, but it's replayable and interesting enough to make farming for rare drops a fun challenge.

This was a fun game. Ends at level 20 though, which was rather abrupt. I was just getting in my groove by then, with upgraded weapons and a good configuration.

Doesn't work for me on Firefox. I get a white screen.

Good game, but the rarity of weapons gets high as the game progresses. I only got a few yellow items and one purple. Good game over all.

Also you can continue fighting after level 20 if you want.

So, I've been playing this game for a while and I've only found 1 purple item. It's the mini suit, a decorative item, that reduces you size by 30% and increase you speed and damage reduction by 10%. Has anyone else found any other decorative items or purple for that matter?

The only decorative part I have found is Ninja Suit, which increases damage by 15% and attack speed by 10%. I got it on 5th lvl. No clue about others