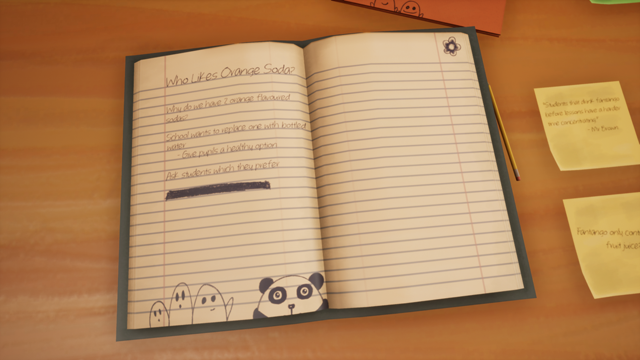 You find yourself in a familiar place with a yet unfamiliar feeling: in the middle of your large but empty high school building. As you pace the desolate halls, nothing but the occasional sound disturbs you: a bell rings, a door mysteriously slams shut. Your only form of interaction in this place appears to be with scattered notes and an archaic computer system. It appears that your character is in the middle of some investigative journalism, asking questions about something innocuous as soda, despite more foreboding matters. When you finally approach the abandoned computer workstation, it is almost as if it is trying to speak out to you. Even more bizarre, apparently someone has gone missing from the school in a cold-case twist all these years ago, and it is up to you to resolve the mystery...

Emma Hougton puts together a charming game through the Unreal engine, creating a detailed and realistic lighting and point-of-view experience. The game is somewhat reminiscent of Viricide in a completely different genre. You move around with WASD and use the right mouse button to zoom in and left mouse button to select dialogue options. There is some definitive room for improvement - the instructions for controls in-game are notably incorrect (it's 'E' to interact, not 'A' as said ingame), some further background music or sound could be filled in, and the ending feels as if something is not quite filled in. Despite some shortcomings, it's still a solid way to spend half an hour or so - just allot plenty of time for the large file to download if you have a slower internet connection.