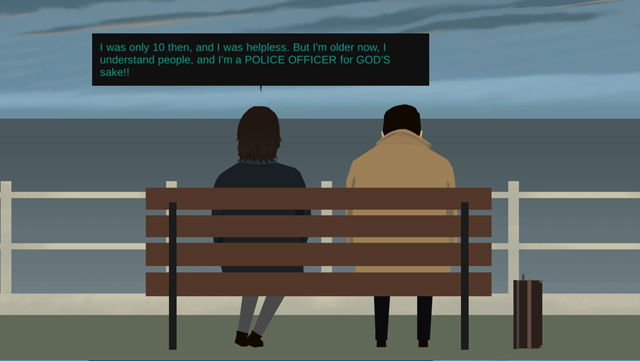 Killing characters at the end of the story, in my opinion, is a cheap way out. Having them die at the beginning takes courage. As the culmination of two years of hard work by developer Armaan, the full version of Rainswept is fully out and available. You may remember a demo of the project that I reviewed nearly a year ago. The story and prospect were something that entranced me, but little did I know that what Armaan had in store would be even greater for the finished product. Perhaps it was just a stroke of luck that created the authentic experience of waiting so long to find the answers to all the cliffhangers. And in this full version, you might finally get to the bottom of all the strange events in the shell-shocked small town of Pineview.

To refresh your memory, the town of Pineview is quickly tucked away deep in the country, protected from the hustle and bustle of the city. The town planners intentionally preserve the seclusion, to keep tourists from wanting to gentrify the area and destroy the peace. This is all shattered overnight with the violent death of a couple at the hands of a gun. It turns out that the two of them were relatively new to the area, and things between them could have gone more smoothly. The local police and junior detective have more-or-less satisfied themselves as to the resolution of the crime and the motive, and the rest of the town expresses little more than a collective shrug of indifference.

You play as a more experienced detective from the big city, called in for assistance since the town hasn't had an incident like this in a literal lifetime. The local officers resist your attempts to explore deeper, almost feeling violated by the act of intrusion. There's a festival coming up in the town and it's a giant annual tradition. Is Officer Watts, the main detective in charge, just really looking forward to the festival, or might he have something to hide?

I wrote in our demo review that character development and the richness of the story were some of my favorite aspects of Rainswept, and that continues a fortiori in the full version. It's pretty clear early on, for example, that our detective hasn't quite conquered his own demons. From collapsing on the floor in the middle of the day to nearly causing a bad car accident, something is afoot that he stubbornly refuses to share. The mechanic Jack that the detective runs into is taking a suspiciously long time to get parts for and fix his car. And let's not forget the couple Brad and Diane, the couple who are the subject of the investigation but as characters have never felt more alive. 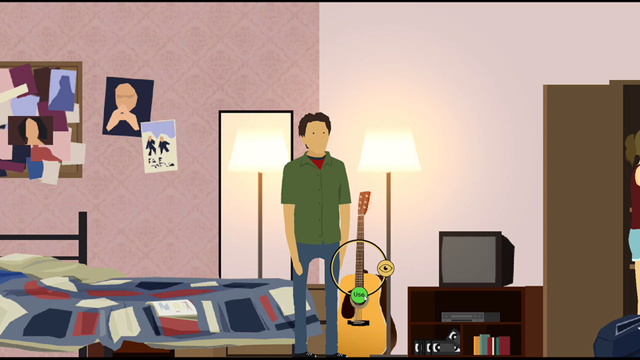 Controls have been improved since the demo version and are more intuitive. You can move around with [A/D] and hold [Shift] to run. Interacting with an object or scene can be done with the [E] key, which is helpful to navigate the world when you need to head across town. You also have several options for interacting which vary based on the situation: "look at," "inventory," "talk to," and "use." If you've already been through a conversation before you may skip through it as well, saving you the trouble of having to re-explore dialogue options.

A few things about Rainswept could potentially be improved. The map felt confusing and navigation is a bit awkward as a consequence. That is, I suppose, mostly the consequence of putting a three-dimensional world into a mostly two-dimensional playing area. Overall though, it was an overwhelmingly positive experience for me and definitively the best game I've played of 2019 so far. If you haven't checked out the demo, or it's been a while, I'd definitely recommend you have a look. If you enjoy the style and gameplay of it, you can look forward to more of the same in the full version.

​Rainswept is a masterclass in creating a great murder mystery... It's the best point and click adventure game I've played since Thimbleweed Park.​​

Very cool game: a fascinating plot, a wide selection of characters, a very cool original soundtrack (Downfall, The Cat Lady, Lorelai), and of course there is a lot of rain. Thanks to the developer.

And thanks to Arceus for the find :)