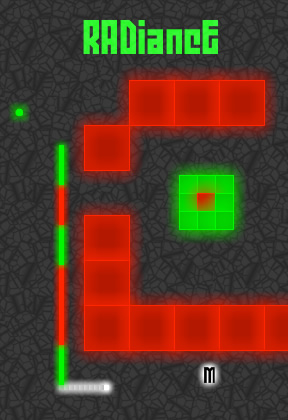 It's Snake! It's Breakout! It's a gleeful amalgam of both! It's RADiancE, a new classic-style arcade game from developer Miguel Angel Perez Martinez, and along with some color matching and clever soundtrack work, it's also more than the sum of its parts.

You control the snake, using the [arrow keys] to point it in the direction you want it to go. Like in classic Snake, the goal is to eat food pellets, which make you longer, while avoiding walls and your ever-growing body. Like in classic Breakout, there is also a ball, which you should use to clear each level of obtrusive colored blocks. The snaky body is used to bounce the ball into blocks, the catch being that the ball can only destroy blocks the same color as itself. When you eat a colored food pellet, you add a new segment of the same color to the snake, and the ball also changes color when it bounces off that segment. So color transfers from the pellet, to the snaky body segment, to the ball, to the correspondingly colored block which it destroys. Clear the playing field of blocks without crashing into yourself or other obstacles, and live to see another level.

Analysis: The synthesis of these two classic games works fairly well, and after a few trial runs it's pretty easy to get in the groove of knocking down colored blocks, using colored balls with the slithering paddle that is also a snake. There is, however, a high degree of randomness, which may or may not be to your liking. The colored pellets appear randomly, and only a few appear at a time before you eat some, so there isn't much you can do to control the color of the snake. It's also difficult to control what color the ball becomes, and you are much better off guiding the snake towards the ball and leaving its color to fate. There is still a certain amount of strategy in corralling balls toward blocks and in judging when to eat and when to stop eating.

There are a number of different power-ups, such as classic multi-ball, or the "Supercharged" snake which can destroy blocks directly; and while these power-ups add variety to the game, they also tend to add to its randomness. Among the block-destroying levels are also a number of geometric boss fights (Behold the dread fury of the Meta-Square!), and while they have little to do with the core mechanic, they also add a different twist, as you puzzle out how to destroy these Euclidean menaces with your limited repertoire of maneuvers.

I'm a big fan of the randomly generated soundtrack in RADiancE. The ball produces random pitches whenever it strikes a surface, and the music changes key every time a block is destroyed (actually, I think it changes mode, but that only matters if you're a music theory nerd like me). The music gets more intense, adding percussion and ambient harmony as you destroy more blocks. While it sounds a little abrupt in earlier levels with fewer blocks, it's very effective when there are many blocks to destroy and the music has a chance to build gradually. I imagine, though, that the code and resources needed to execute the music is what accounts for the unusually long loading time, so there is a price.

RADiancE is much more than a slapdash chimera of two different classic games. The colorful neon graphics and inventive use of music and sound make for a bold, flashy presentation. And while there is more than a little bit of randomness in the gameplay, there is also enough skill required to make it interesting to arcade fans. RADiancE goes beyond simply combining two games and expands the concept into something original.

This is a very good concept. I am really enjoying it so far. Did anyone notice a sound delay? It seems like it plays the tones a bit after it actually makes contact.

@Kirkpad - if you're playing in Firefox, try a different browser (like Chrome). Since Firefox isn't multi-threaded (yet), each tab gets interrupted when updating the others. That may be to blame for the delay you're experiencing.

Finally somebody did something interesting with those stupid snake games! I love it.

The controls are a little bit too sluggish. A game like this requires the absolutely snappiest of controls, and it's a little too hard turning the corner in this one. That makes some of the levels that require maneuvering in tight spots really, really frustrating.

Any hint for the metasquare?

Remember that the head of your snake is the only thing evaluated for collision purposes. So use that to your advantage when the smaller red squares attack.

Only one complaint: Level 2-7 is way to hard and literally took me hours to beat. Finally a game with bosses harder than most of its levels.

Agree about level 2-7. I finally got past it and made it to the 3rd boss before I quit yesterday, and it never saved my progress, so I'm stuck on 2-7 again!

The game itself got very repetitive after some time, but the boss levels were great! I only wish there were more of those...

I am once again reminded how horrible I am at snake-type games. They need to add an option for "slow mode". As it is, I can't even get past the first level.

Does anyone know how to pass 2-7 more than once??? I keep getting so close then i run into a wall or a brick while trying to change the balls color.

Gears of Fun??? More like blades of death! Must be a reference to Maximum Fun Chamber and the Happy Fun Ball.

Does anyone have an idea on how to beat the final boss (metageometry) ? Once it's down to its last level it moves way faster and i can't outrun it

I had a bit of trouble with metageometry's last form too, where he turns into a snake too. You have to approach it like the old tron biker game. Don't let him get side to side with you - he's faster and will do a little sideswipe and kill you. if he gets that close, turn away.

The only way to really kill him is to trap him into smashing himself into a wall. It's pretty hard, but possible. Just remember to turn away from him if he tries to race next to you, and don't be afraid to loop around in a circle. You are short enough that you won't run into your own tail unless you cut it very tight. Use that 'loop around' to avoid his strikes, and try to get push him closer and closer to the wall each time. Eventually he'll mess up.

EVERYONE! on level 2-8 with the invisible blocks. look VERY closely at the screen! its all black and grey but you can see black blocks! if you cant see then turn the brightness of your computer moniter up!

I see that some of you have gotten into level 4. However, the last one in level 3, Metaball is as far as I can, er ah, it will let me go. I even tried to click on 4 but it does nothing. I'd like to finish it because this game is interesting and fun!

I did manage to finish!

But all worked out anyway! Just thought I'd share with you. Have fun!!

2.7 is pretty straightforward. It has nothing on 4.3, but same concept.

Stay close to the edge of the screen and nip out every so often when you see a chance to grab a colour pill. There is enough room at the edge to manoeuver without fear of colliding with the blocks. The bouncing pill will eventually find you and then start taking the blocks away for you.