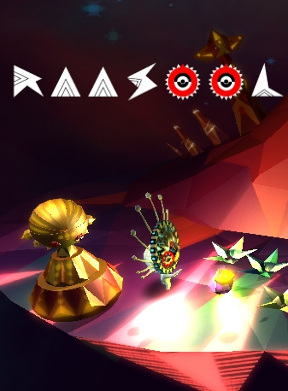 The students at DADIU (the National Academy of Digital, Interactive Entertainment in Denmark) want to take you out of this world for a while with RaaSool, a beautiful point-and-click puzzle adventure. In it, you control the titular character, who is in fact the Sun of another universe, who has fallen from the sky and needs to climb back up. The world he finds himself in is more than a little alien and surreal, but with your help and a very Majora-esque time-manipulating mask, he can find his way home. Just click on the screen to interact with objects; the cursor will change to a paw if you can use something, or an arrow if you can move to the location. Clicking on RaaSool's mask will move time forwards or backwards, which affects the surrounding land in different ways depending on what you've done. In each area, you'll need to figure out how to change it in order to proceed to the next one.

While chances are you're not going to be familiar with most of the... I don't even know if this stuff is flora or fauna... the environmental obstacles you'll encounter in the game unless you're a resident of Whoville, the game still won't be particularly difficult for most players. The biggest challenge lies in figuring out how to manipulate the landscape, and a few clicks back and forth through time after fiddling with everything you can will probably set off a light-bulb before long. In this, however, RaaSool displays its best quality; imparting a sense of wonder and exploration that other point-and-click games lack with more familiar settings or clearly defined rules. The game is, unfortunately, only three levels long, which will run most players about fifteen minutes or so of play.

For such a little game, it had a surprisingly large team behind it; director Claudia A. Bille Stræde, designer Paul Brinkkemper, project manager August Ras Jørgensen, a host of programmers (Jakob Udsholt, Rune Holm, and Michael Jensen), even more artists (Stephanie Degiorgio, Pernille Sihm, Elisabeth Atlandó ttir, and Stinna Frydkjær), a pair of animators (Josefine Hannibal, Thomas Mortensen), and sound designer Bjørn Jakobsen. Phew! That's a lot of names, and a lot of talent... almost a sequel's worth, wouldn't you say? (Hint, hint.) With its comparative brevity and limited narrative, RaaSool does wind up feeling a little like more of a prototype than a complete game, but while it lasts it's a beautiful, otherworldly little adventure that everyone can enjoy.

...Only three levels? This game was good while it lasted, but... it didn't.

I have been having trouble getting the game to load. When I click "Play RaaSool" a new screen opens up, and it looks exactly like it usually does when you open a game here, except that the game is not there. I have tried on Firefox and Safari, but I can't open it on either.

[This game requires the Unity plug-in. Be sure you have that installed. Click on the "plug-in info" link in the review header to download the latest Unity Player installer. -Jay]

How cute is that!!

short and sweet granted but brilliant none the less

the cute little guy grabbed you from the start and that's what you want to happen when you are making a game, so well done by the Danish Students!

[The game is very large (about 54MB) so it might take a while depending on your connection. Also, try clicking on the "Loading..." screen, I think I experienced it getting 'stuck' on that screen once, and a simple click started the game for me. -Jay]

Finally got it running. So beautiful. I want more,please!

More, please! Wonderfully done in the three levels provided. It definitely left me wanting a lot more. Excellent work - kudos to those who worked on this.

I loved all 10 minutes of Raasool. Add about 10 levels and it would be perfect. It felt like experiencing the first two levels of Samorost for the first time.

That was a cute game :) Simple, but they didn't waste anything on presentation.

My macbook can't cope with this. I wish there was some way of lowering the quality. First level is okay, but then it's just waay too slow to enjoy. But it really looks amazing.

Damnit, I haven't been able to play unity games ever since I switched to the latest firefox version, I don't even get to see a loading screen.

That was a really good-looking game (with a couple harsh border issues, and some lighting hassles.) Good puzzles, not tooth-grindingly hard but not simple either. Nice atmosphere, and done without adding any clumsy story or 'bad guys'. More levels please!

I want to play Myst now. Is there a decent flash version yet?

Okay, fun little game and I'm assuming proof of concept....when do we get the full version? I feel like I only played long enough to get to the title screen!

Thanks for the great comments!
(August from the development team)

And as most of you are saying it is pretty short, but each level took a long time to make since the content and style is meant to progress from level to level.

Great Dane - my macbook didn't LIKE it, but it handled it...the first time. I had a easy load time, and played it through, and wrote my little blurb. Second try, though, nothing - stuck on the load screen. In future attempts, I would get levels with nothing on the screen but Raasool himself, or a "blank" level that looked like an iceberg floating in space. Since the first run-through went fine, I'm wondering if it was less compatibility and more connection...?

Menschenjaeger i am guessing you have a slower macbook and that the game has not loaded properly. (its streaming meaning that you can enter the game without all the assets).

That was awesome! I agree with menschenjaeger that it was like playing Samarost (or any of the Amanita games) for the first time. Played a little sluggish on my MacBook Pro (using Chrome) but playable and enjoyable nonetheless. My 4 year old LOVED watching "the little dude with the bally crazy head".

For some reason, this game felt very... 'mythic'. it felt the same playing it as it feels reading native american folklore.

As with all Unity games, this doesn't run on Linux :(

This game was sooooo awesome I wanted to get Unity3D, but then I saw the inmense price on it.
At least I have Blender3D.

Hey, I simply loved every moment of this presentation.... I was totally absorbed into this otherworldly place...... I was soooo into this character!!! Really <3 it!!!

What a great game. Thank you for the fun.