What do you get when you combine the dark mystery of Twin Peaks with the absurdity of Deadly Premonition and a Saturday morning cartoon crossed with Miss Marple? Apparently, Puzzle Agent from Telltale Games is the unlikely answer! In this bizarre mystery point-and-click adventure series, you join forces with a very unusual hero; Nelson Tethers, who works for the FBI Department of Puzzle Research, and is assigned to the small town of Scoggins, Minnesota, when their eraser factory shuts down following the disappearance of their foreman, Isaac Davner. Since the factory supplies all the erasers to the government, this is a bigger deal than you might expect, but Nelson is about to find out that the same holds true for the case he's trying to solve. Scoggins has a lot of secrets, and its townsfolk are more than a little eccentric, but are the rumours and local legends the result of a lot of small town gossip, or has Nelson really stumbled across some sort of conspiracy? 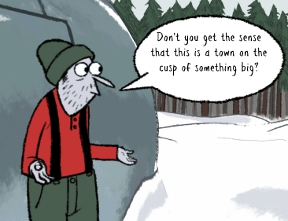 The Puzzle Agent series consists of two games, with the recently released sequel picking up just a few months after the original and continuing the story. In Puzzle Agent 2, Nelson returns to the burg of Scoggins, dissatisfied with the FBI's apparent disinterest in finding out the truth, and discovers that the truth may be even more complicated (and weirder) than he'd previously suspected. The townspeople don't seem to want to cooperate, someone is leaving him coded messages, and of course there are the Hidden People that don't seem to appreciate his prying.

All you need to do to play is click. Clicking anywhere onscreen that isn't itself an interactive hotspot will send out a circular pulse that highlights places you can do something with. A magnifying glass, for example, means Nelson can take a closer look at an object. Unlike most point-and-click titles, there's no inventory to manage; progress is made by talking to people and exhausting topics in Nelson's notebook, and also by solving the various puzzles in your way. Puzzles can range from mathematical problems to mazes to logic and more. If you find yourself stymied, you can use some gum (which helps Nelson concentrate) to get up to three hints, so keep your eyes peeled for gum stuck all over town... yes, even the previously chewed stuff. Ewwwww. 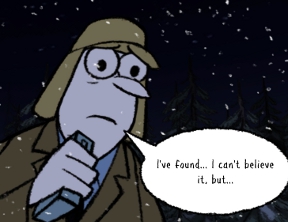 Analysis: There really are no words for how badly Puzzle Agent needs to be its own television series, but I'll take its signature brand of casual, sneaky humour and surprisingly freaky mystery any way I can get it. Artist Graham Annable's work lends Puzzle Agent much of its charm and humour, with Nelson's nebbishy, perpetually worried expressions and oddball townsfolk making for some surprisingly funny scenes, often without a word of dialogue. The atmosphere perfectly captures the drama and eccentricities of small town life and people, and then exaggerates them just enough to make them absurd and stirs in exactly the right amount of creepiness.

The bad news, then, is that for a game with the word "puzzle" right there in the title, the puzzles fail to impress, and feel like they're doing little more than refusing to let you proceed with the story until you've solved a page from one of those Big Book 'o' Puzzles you can buy for two dollars at the supermarket cash register next to People and Woman's Weekly. Most of them are logic puzzle variations that can be frustrating to the point where the game really just needs an option to skip them by paying a fee in gum. One puzzle that involves flipping tiles to connect a ridiculously long and complicated pipe path, is actually done twice in a row after a silly complication once you solve it the first time that requires you to solve the exact same puzzle seconds later. 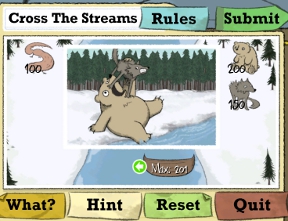 So it's both good and bad, then, that the sequel, which picks up the story shortly after the end of the original, is more of the same. Good because it's a return to the surreal, funny, just a little creepy adventures of Nelson, but bad because it doesn't really do much to improve on what was a flawed formula to begin with. At least most of the blander puzzles have been retooled somewhat and presented in a more entertaining fashion. It's still a disappointment since the rest of the package is so stellar, and the characters and world of Scoggins really are such a treat to experience. It almost makes me wish the game were more of a traditional point-and-click type with your typical inventory/item use activities than Professor Layton by way of Fargo. As for the story in the sequel itself, it significantly fleshes out the mystery in new and unexpected ways, while expanding the cast and Skoggins itself so you don't feel as if you're just rehashing old territory.

While Puzzle Agent hasn't quite found its groove, it's still more than worth playing for the story alone. Both games will take you around four hours to complete, depending on how the puzzles trip you up and whether you track down and solve the "bonus" puzzles to boot. The game also looks and plays great on the iPad, if you have one, where the touch controls feel perfectly natural. Nelson Tethers likely isn't going to dethrone Professor Layton anytime soon, but it's hard to dislike a guy who rocks that flap hat so hard. If you like humour, strangeness, conspiracies, and little guys with beards and red hats, make a trip to Scoggins today. And make sure you try the Hot Dish... it's awesome.

I've played both games from beginning to end. Interesting experience, albeit unusually linear. And the puzzles aren't THAT bad if you ask me.

If the pipe flipping puzzle is the moment I'm thinking of, it was the best moment from the first game. I'd say the "silly complication" more than paid off for having to do the puzzle twice.

"What do you get when you combine the dark mystery of Twin Peaks with the absurdity of Deadly Premonition..."

I think what you get is "Twin Peaks".

I wouldn't call Puzzle Agent a Saturday cartoon, it's got some good terror stuff and as you can see it's rated yellow. I found these games great and am happy there was an ending.

I've said something similar on the Telltale forums as well, but I just want to say I agree with Dora: the puzzles really are THAT bad.

I know they're not really comparable except in the vaguest terms, but the LETTERS IN BOXES puzzles you've been running have shown a far higher degree of ingenuity and craftsmanship than the ones in this game. It felt like someone at Jayisgames actually WANTED to create a fun puzzle, whereas in Puzzle Agent, as Dora said, it seems like they felt obliged to put some puzzles in because of the title, so grudgingly threw some together.

I like this sort of puzzle meets adventure type games (Prof. Layton being most prominent member). It's a real shame if the puzzles are so predictive as all of you describe! But that's where good story, characters, dialoges, and/or graphic come to play, and first part of PA delivered solid on that points. Looking forward to this part!