ERS Game Studios' hidden-object adventure series PuppetShow turns five years old this year, proving that there's nothing people love more than sentient puppets with soulless eyes and hungry plastic mouths, so good job, you weirdos. PuppetShow: Lightning Strikes is the latest, taking place in Paris in 1888, and you've been called in to assist when local women begin vanishing during lightning storms, and anyone struck by lightning turns into a living puppet. Despite this, since puppets are already a big part of this alternate-steampunky-France, down to the creepy mechanical newsboys and creepier ice cream vendors (we all float down here), nobody thinks to suspect them right up until one shows up and tries to steal a piece of evidence. Seems the victims might all have something in common, and love ain't always sweet. As you travel the city solving puzzles, you'll uncover evidence you'll need to sort with the help of your new psychic friend who really wants her magical doll back (I swear I'm not making this up), deal with a cranky fellow who possesses the bizarre ability to bring inanimate objects to life, and more. 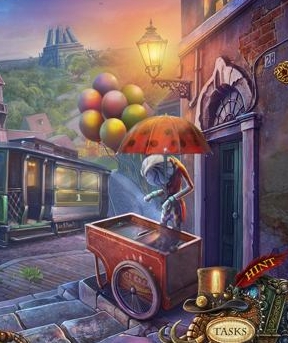 Lightning Strikes' gameplay is a little strange. It's filled with variety, but never really approaches any level of challenge. Still, the enormous amount of different puzzles and obstacles means things stay fresh throughout, though players hoping for more traditional hidden-object scenes may find the game's abstract approach to them doesn't quite scratch that itch. The game frequently has you track down multiples of items (six springs, six pegs, etc) The biggest problem with Lightning Strikes is that it has an absolutely bizarre concept of difficulty. Your "explorer's mask" always shows you what items you can pick up regardless of difficulty settings, and a jigsaw puzzle set on "casual" difficulty literally just solves itself. The result is a game that feels like it always has training wheels on no matter how you're trying to play it, which is a disappointment since Lightning Strikes might be the best game in the series when it comes to plot and creativity in design.

Though the voice acting can be, um, wooden (or is it plastic in this case?), the character design is fantastic, especially when it comes to the various puppet constructs themselves. Previous titles in the series tended to default to simple marionette designs, so the more unusual (and deliberately creepy) styles here add to the atmosphere tremendously. The characters themselves are also a lot more interesting this time around, and you may find yourself wishing you were playing as Froissart, who reacts to hanging over the side of a malfunctioning airship with casual coolness. Despite the issues with the difficulty and an annoying plot moppet, it's always great to see a studio willing to take risks and experiment with one of their flagships titles, and PuppetShow: Lightning Strikes feels different from its predecessors in a very good way. It's imaginative and engaging, with its blend of drama and camp, with cutscenes that keep you hooked and just the right blend of mystery and ghoulishness. Besides, there's magic lightning neckbeard. What more do you need? PuppetShow: Lightning Strikes injects a lot of flair and creativity into a much loved series, making it one fans and newcomers alike would do well to check out.