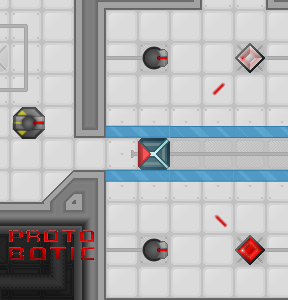 Protobotic, a new action puzzle game from developer, Tyler Owen, poses a valid question to players: what problem can't be solved with lasers? The answer, just as in real life, is very few. Using [WASD] and the mouse, steer your indestructible laser-blasting robot around and solve the puzzles in each room to escape and move on to the next. The proceedings start simple but rapidly increase in complexity as you're faced with devices to reflect, split and block your lasers. Your robot, as mentioned, is indestructible, so the focus is on puzzle-solving rather than action.

Protobotic offers 18 levels of photonic goodness for your laser-blasting pleasure. These range from block-pushing fare to an interesting experiment in traffic control using switches. There's a nice mental workout here without much risk of banging your head against a desk, so dive in! It's not like these lasers are going to blast themselves, after all, though that would certainly be awesome and it's a field that Earth's scientists need to research immediately.

Might just be me but it hangs in Flash on level 17 whilst trying to get through the timed doors. I gave up after it happened 3 times in a row.

Other than that it has a lot of timing puzzles.

Same here. Was a really fun little game, but I can't get past 17. It always freezes on me.

I got through 17 with no problems:

recall that you can use your bombs to stop the sliding blocks--that should make it easy to make it through the black doors.

I got through 17 without much problem. Now 18, I'm stuck on. I can't see how to reactivate the right-side laser gem once I'm through to the top. :-/

18 took some experimentation but when I put

the Mirror block top left and switcher block top right, Bomb bottom left and X block bottom right, you can use your missal on the X block

They also give you a handy window to shoot through

I contacted Tyler Owen, the developer of the game, and here was his reply about the level 17 issue:

"First off, thanks for taking the time to review and feature my game on your site. This is actually a bug that slipped through the cracks that I was unaware of until your email. The problem is that players are attempting to solve the puzzle in a way that I had not intended. I will try to create an updated build for you later tonight that should solve the problem. Kind of impressed that two of your users noticed the same bug that I have not seen on any other portal."

So, congratulations. :) I'll update the game here once I get the new build. But the level is solvable using a different method as noted in the comments above.

take the Companion Cube knockoff with you.

New version uploaded: Fixes the issue with level 17 as noted above in the comments.

I've been experiencing a glitch off and on. When I finish a level, the game doesn't seem to notice; the "level finished" flag doesn't trigger, and I can wander around blindly and even appear outside the level's bounds.

remember that you can pass through purple walls

the two laser-controlled doors are out of phase, but you had this problem before, right?

move one mirror to switch only one door