If you're going to read this you better do it quick because you're running out of time. In roughly 20 minutes a subway train is going to go off the rails and you're the only one on board this speeding death sentence. In TrainYard's free indie game Process it's up to you to solve the puzzles to restart the subway train's system before your time is up. Trapped on the dingy, darkly lit two-car train you start out with nothing... not even a reason why you're there and why you're the only one there. There is something definitely unsettling in this horror point-and-click game, besides just the horrific wreck that will happen in a little more than a quarter of an hour. Something is trying to stop you from completing your tasks, but how can you fight something that never shows its face, if it even has one? Your best chance is to just try to focus on stopping the subway train. Better hurry because it's picking up speed. 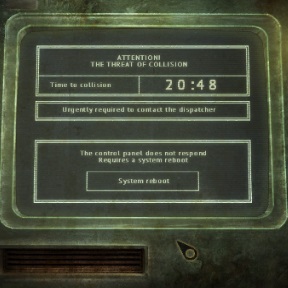 I have nightmares where I'm trying to get something done, but it's so dark I struggle to do even the simplest of tasks. That is what Process is like and, boy, does it just add on a whole other layer of panic and terror. With the amazing graphics and 360 view in each screen, it can be a little overwhelming to find something to assist you. Your cursor is what will save you, though, as it's the only thing you use to play the game, besides [ESC] which will bring up your inventory. Part of it will light up when you move over something you can actually look at or pick up. Sometimes if you click on something you can't interact with, the screen will jerk around. Instead of seeing this as a glitch, I felt like it fit with the panic of the situation on a timer ticking down in the other room, and something supernatural in the air. It's as if your character thought he saw something out of the corner of his eye and quickly went to look. Either way it doesn't slow down the gameplay at all. This is one intense game, where perhaps the ending may leave you wanting more answers, but is done well enough you'll appreciate every moment.