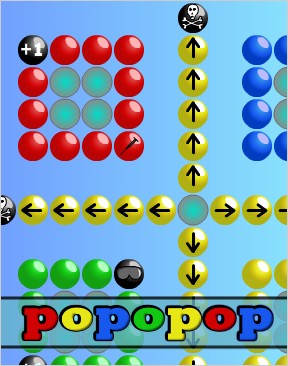 A game for anyone who loves tromping on bubble wrap, Popopop by Bad Viking offers you 42 puzzles of color combo popping action. There are some obvious parallels with Ninja Kiwi's Bloons series, in the sense that you POP a whole lot of BALLOONS, but the methods are totally different. Plus, Popopopop gets an extra gold star for being named after its dominant sound effect (also see: Clack).

On each level, you'll see a colorful layout of bubbles arranged on a grid, and a selection of starter bubbles in a box on the left. To start a combo, drag a bubble from the box into an empty spot on the grid. It will pop, causing any nearby bubbles of the same color to pop as well, setting off a chain reaction. Your objective is to obliterate all the bubbles in the grid (except for the ones decorated with a skull-and-crossbones) without running out of starter bubbles.

As you beat levels you will, as the instructions say, "meet new and exciting balls that do different things and offer new challenges." Which means the further you get, the harder Popopopopop tries to make your life a living hell. What initially looks like a pure puzzle game pulls back its mask to reveal a gauntlet of precision timing and mouse dexterity.

Among the special bubbles are the needle, which gives you a limited amount of time to pop stray bubbles with your cursor directly; and the thundercloud, which can destroy all the bubbles in a straight line, but requires split-second timing to hit your target. Those Jolly Roger bubbles I mentioned, if popped, instantly make you lose. One bubble actually blacks out the screen and forces you to complete the level by intuition.

So it's not a nice game. There's even a level called "Blind Luck", and it ain't kidding. A lot of players will give up at that point, if they didn't already quit at "Perfect Timing" or "Perfect Timing II". But it's all in the spirit of fun. You can easily picture the makers of Popopopopopop giving each other high fives as they discover yet another way to cripple the poor suckers playing their game. "Hey, what if we blind them now?" "Yeah, and then let's cut off their legs!" "Yeah! Screw you, players! Hahaha!"

If the official levels are getting you down, give some of the player-created levels a try. As part of the current, welcome trend in web-based puzzle games, there's a simple level editor with a rating system. That alone makes Popopopopopopop more like a playground than a challenge. Good, silly, frustrating fun. Once you stop to pop, you can't stop the pop till you top the crop of pop pop pop pop.

The basic strategy for this one really reminds me of a game I used to play called Puzzle Link, back on the relatively obscure NeoGeo Pocket Color. I like this one; nice find! =)

It seems like I'm occasionally outsmarting the game and ending the level with surplus bonuses, ie a lightning strike, or finding a way to pop the blackout bubbles last, thereby avoiding the annoying effect.

You'd think the levels would be designed so there was one semi precise way of doing them while using every bubble.

As far as I can tell, the strategy is to place your one yellow bubble on top, then quickly use your pins to pop a circle around the skull bubble... but I can't move my cursor fast enough and accurately enough to do it!

I always hated mouse avoider games, and I think this falls into the same category. (I use a laptop with a trackpad, if you're wondering.)

I gave up on 35 too, blew through the game until then, though.

Much easier if you use the flash right-click exploit

I'm at level 35 now. I think I can see why you guys gave up on it, and frankly I'm ready to follow your lead.

...Hey! Every time Psycho mentioned the game's name in his review, he added another "-op" to it!

This was pretty short, sweet and fun. Level 35 is a bit annoying, you just have to pop enough with the pin that you can blast the rest with a single lightning bolt. It took me five or six tries, but it wasn't amazingly hard.

Level 42 took some serious thinking though.

Now I'm stuck on 37. I barely have enough time to pop even one line with the pin before going for the lightning bolt! I don't have a steady hand.

first pop needle and bonus ball, but i guess that's obvious.
trick with the needle is to draw fast and smooth horizontal lines from left to right. just be patient not to miss any ball, you'll have enough time with a needle and only 2 or 3 balls should be left in the corner to pop with lightning.

Incidentally, why is this game rated orange? I honestly doubt the profanity you scream at your screen when you fail a level for the 100th time counts towards the game's maturity rating.

[EDIT: It's rated yellow, and that's just because there's some profanity in the titles of the user-created levels. -Psychotronic]

I also gave up on 35, no way I'll do that with a trackpad. I also used

Does anyone know why, if you pop all the bubbles but not in a particular way, it makes you replay the level? I didn't see anything about that in the instructions. If all the bubbles are gone, what difference does it make?

you pop the black ones with any color, but they cause the screen to black out.

Can someone give me a solution to 42? been playing it foreeeeeeever

Sarah: Are you sure you're not popping a skull-and-crossbones bubble by accident? I never noticed that a level would end just because I popped the bubbles in the wrong order.

@SonicLover, there is a much easier way to finish Level 37:

First pop the lightning ball. Then use lightning on pin ball (heh) with your cursor placed on fourth ball in far right column.

So, I can't get past level 8. For some reason it lags every time it plays a sound, so the timer on the "Pin" buff is wasted.

I know I'm gonna sound pathetic but, I really need help on level 8

Me too, level 8 help please.

Is anybody else getting a glitch on level 36? I cleared it twice with my last thunderbolt, and both times it said I lost.

Use your first ball to pop the squares on the left middle and left bottom gaining an extra ball. Then pop the right middle and right top gaining another ball. Now pop the two remaining sets on the bottom which will give you the tack. As soon as you set the ball, position yourself over the blue ones so you can start popping quickly. Timing is important here! Pop the middle and head for your second tack, popping all the remaining balls. It may take a few tries to get timing just right, but it will work this way.

Okay, level 26 is really bad. My computer is moderately powerful, and it slows down too much to allow me to accurately pop all the bubbles around the skull.

I need help on level 19! That stupid maze I cant get past it! Help me someone any tricks that i can use???

This game is poorly designed - the developer needs to decide what it is trying to accomplish.
First 25 levels were a great "intellectual game". Levels 26, 28, etc the game becomes a poor "mouse skills game."

Mouse skills games are useless - time consuming and do nothing for the mind.

Place the first ball above the black ball - screen goes black. Place the second ball near the center of the "H" - from there it is just luck with the proper timing.

I agree - the game is promising at the start, but then quickly turns into a mouse skill game. Not fun, especially when playing on a laptop. This game has some great potential, but they need to develop more puzzle-type levels!

The Spoiler for Level 42 is not correct, or if it is it is not explained in enough detail. Any help would be appreciated.

Level three has also stumped me... sadly... Any help please?

STEP 3 - Use (LA) ball on the RA ball in far right column (will only pop just this one..that's ok)

i cant do it lol.

how do you get past level 3?

I AM STUCK ON LEVEL 3 can any one help??

how do you get past number 27 on popopop?

someone PLEASE help me with level 12! i am so confused!

1) use RA on any bubble on the left most side.
2) use LA on the RA bubble on the right most side (this will only pop one bubble, thats what you want)
3) use the blank bubble on that blank space you just opened in 2 (this will send 2 popping lines)
4) use the UA on the RA at the bottom most corner (left), this will pop everything on top, leaving one little section
5) use the DA on the furthest RA in that little section, second one is from the right, and that should pop the rest of the bubbles and YOUR DONE!!

Is it just my computer, or does anybody else have trouble getting the pin to move swiftly? Every time I try to move the pin, it kind of freezes a bit here and there, making it possible to pop enough balloons on Level 35 before the pin runs out.

i am stunned on level 36

I'm on the last level and can't figure it out!! XD

Pop the red line. Then place your yellow balloon thing in the middle row, between the 2 yellow rows. It will pop both rows, then continue with the 2 remaining colors.

can someone please help me onl level 37,its so frustrating

I'm on level 31 and I need serious help! If anyone knows how to complete, please help me!
Thanks!

please can someone help on level 8 ive been trying and trying but cant seem to get past it.......this sucks

Hahaha I beat level 26 because my screen froze for a split second :P

I need help with level 16! Please.

This game is soo annoying... there needs to be an unlimited bubble mode or something. Level 37 is just how fast you can move your mouse and on a trackpad its almost impossible.

hi can anyone help me? i'm stuck on level 8.

Level 27:place the green ball above the square/diamond above the first down arrow drop it when they all turn green ....hope that helps later

Hi, people. I would appreciate a spoiler on level 6 thanks.Really!!

Here are two tips that Flash game designers should keep in mind:

1. Don't have split-second timing puzzles if your game has lag issues. Not everyone has a lightning-fast computer.

2. Don't have mouse-skill levels with a custom cursor. Ever.