Contrary to what you might think, police work has been made to look more glamorous than it is long before CSI and Law & Order stepped into popular culture. Yes, we shouldn't forget the profound contributions of Miami Vice. But the most realistic of the Sierra adventure games did not stoop to such base entertainment. Instead, all four games were grim thrillers with a penchant for making you walk through all kinds of police procedure (sometimes to a pedantic degree), all while hunting down drug lords, serial killers and satanic cults. Forget Space, Heroes, Kings, or Larry. This is Police Quest.

A recent arrival on the nostalgic shelves of GoodOldGames.com, the Police Quest adventure series is now available as a collection. The games are classic adventures in every sense of the word, providing you with areas to explore, items to manage, and pages of dialogue to absorb. The first game arrived in 1987 and the series hung around until 1993, exiting the scene amidst the more popular Lucasarts adventures. There hasn't been anything like it before or since. You step into the shoes of Sonny Bonds, a police officer whose beat soon puts him on course for a temporary promotion to the local Narcotics unit and on the trail of the drug lord The Death Angel. This adventure would not only do wonderful things for his career, but also ignite a romance with an old highschool friend.

In the sequel, Bonds is now a detective and is put on the case when the drug lord escapes prison. It resolves the storyline, allowing Sonny to step into a whole new investigation, involving drug cartels and cults, in Police Quest 3. After this the series creator, Jim Walls, left Sierra and the final game was created under the guidance of Daryl F. Gates. It brought a stark change to the series in what would be the final Police Quest. Technically two more games, under the SWAT spin-off sub-banner, were released, but they are largely disregarded by the adventure game fans. 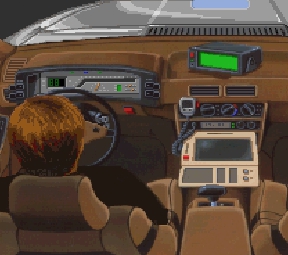 Analysis: Playing GOG's Police Quest collection is an adventure time capsule, at least as far as the Sierra part of history goes. The first game is one of the much-loved VGA remakes that Sierra released in the early 90s, where the original 80s adventure games were updated with higher-res art and the type-command was replaced with a point-and-click interface. But the remake magic did not reach Police Quest 2, appearing here in its original type-command glory. Instead of clicking with a mouse, you types in commands and moved the character with the keyboard cursor buttons, a graphical step up from the old text adventure games.

Many things have changed through the series, most notably the way you navigate around the game's various city areas, from simple driving in PQ1 and simply typing in destinations in PQ2 to PQ3's confusing driving simulator and PQ4's simple interactive map. The series also becomes notably maturer through its lifespan, from PG-13 violence in the first game to the rather grim scenes in PQ4 (including several bodies and a rather unfortunate find in a freezer).

Naturally, it all looks more harmless today, given the pixel graphics and antiquated feel, but the fourth game is definitely not something that young kids should try without some supervision. The Police Quest series is also notoriously tough, not because it presents vexing puzzles, but because it is a stickler for procedure. In classic Sierra style you can easily mess up early by missing something vital, but only realizing later (though nothing nearly as vicious a the Leisure Suit Larry 1 apple ). It's not a series heavy on handing you too many hints, either, and in true pre-Lucasarts style you can expect to replay each game several times before doing it all right (or save very often). 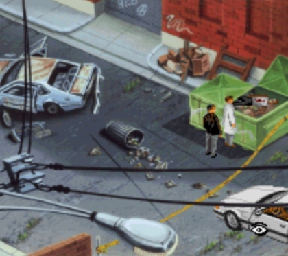 Is it all worth doing? The demise of classic adventure games has often been lamented as a tragedy, but ultimately they drove themselves out of existence by just becoming too hard. It's not possible to go back in time and see if this is also what ended Police Quest's career, but the games certainly did not hold back. So if someone is only familiar with the error-tolerant adventure games where you couldn't mess up or die, this series might be a bit hardcore. In addition the rather wild changes in graphics (made lopsided by only PQ1 seeing a revamp) will seem a bit bewildering outside of context.

These things do not make the games bad, but they hail from an era that demanded a lot from players and went through a wild ride of innovation. The most obvious buyers for this collection are people who have played them before (or have a worthwhile hobby discovering this classic gems), and at the asking price it's a steal. It's also great to see the classic Sierra adventures surface on GOG, which has taken great care to configure Dosbox and make sure the games work perfectly in Windows. All you need to do is install it, even the documentation is included to bypass the original game's copy protection measures (archaic methods that referenced the game manuals).

The only Sierra adventures that were more mold-breaking are the RPG-infused Hero's Quest and it's hard to think of anything in adventuredom that went to such a realistic place as Police Quest. If Monkey Island was Pirates of the Caribbean, Police Quest could be The Wire (or at least The Shield). I can't lie and said it aged well visually, but it keeps a certain character and old-school adventurers will get a kick revisiting the streets of Lytton and Los Angeles.

There was a problem with one of the games (Had to be PQ2 or PQ3 where the driving didn't work because my computer was too fast, and My car went a virtual 2000 miles per hour, basically too fast to control.

I wrote an email to Sierra about it and was basically told "tough luck".

So I hope this version has fixed that kind of issue.

This got to be the best day for Police Quest fans, unfortunately I didn't get around to playing them maybe I will. Thanks JIG

@measure I had no problems, probably thanks to the Dosbox configuration that GOG provides.

I quite disagree with the revier here on reasoning why adventures have demised. Having playing adventures since the colossal cave over kings quest 1 up today, first its not true that "they have become too hard", they got easier and easier. Back in the days you could "work"/play for days, sometimes even weeks stuck in adventure trying on and on to find a solution. You can follow this most closely on the kingsquest series that became easer with every release. And Sierra always had one or two of these arcade scenes in it, that realy went on your nerves.

Adventures where most likely just been killed by the internet. When Google is so near, how long can you really focus to not get seducted? An hour perhaps, even a day? But even with a high frustration tolerance, you do not manage a week. Back the days you could only wait a few months for the next "Powerplay" to include a walkthrough, there was no temptation. I still remember Police Quest to be one of my hardest stucks ever, 2-3 weeks, until I finally found the next missing step.

Mesure, this version should consider the speed of your computer, if not, try finding a freeware/shareware like slowdown.

Adventure games died because people became lazy and have no patience. If it can't be done in 5 minutes, it's not worth doing. When you consider those game took months to finish, no wonder they became extinct.

Aaarrrggggh! I still remember the time (but not which game in the series it was) when I was game over-ed because I... didn't walk completely around my patrol car before boarding it.

"Because you know, Robin... you must make sure that you are not driving around with a flat tire as it could be dangerous to civilians."

"Zounds, Batman! From now on I will always do it. But first, let me smash this damn non-game to smithereens with a hammer..."

Ah, good old Sierra Police Quest games. Also known as "walk around like an idiot doing random stuff until the game decides the day ended and lets you proceed". Or "I will randomly game over you if I feel like it, and there's nothing you can do about it. Hope you saved!"

I agree these games work great as a time capsule, though. I can still rememhered being awed by graphics in PQ3, and than again in PQ4, which sure seems funny nowadays. Also, even though these games have more design flaws than a boat made of soap, it's not that they aren't worth playing - they are still fun, and as long as you remember to save often and are open to accepting some ridiculous stuff there must be plenty of entertainment value here.

Adventure games are far from dead. The posting rules prevent me from providing any links, but there are several sites out there providing game engines for building adventure games. These sites also offer many amateur-made games, some of very high quality.