I don't know about you, but when I found out the Italian plumber Mario had nothing to do with plumbing in his games it was a serious let down. Thankfully, Keygames have noticed this lack of legitimate plumber games and has brought us Plumber Game 2, a puzzle game that is also available on iOS and Android. You're hired by a horribly overheated monster named Clifford, whose pipes have gotten all rearranged. He needs that fresh cool liquid fast, so swap the pipes positions as quick as you can, by using the mouse, to connect one end to the other. It doesn't matter if you have water spraying out of unused ends of the pipes as long as Clifford gets his drink. Well, the water spraying out in unused ends wouldn't be a problem except Clifford has a collection of bombs. If any liquid sprays on them, or if their timer goes off, Clifford is out his eyebrows and you're out of a job. It's a simple take on a very classic type of game, but pulled off very well. 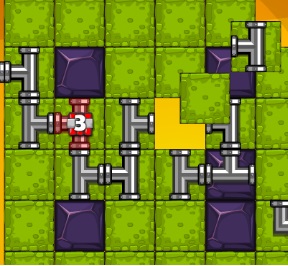 The nice thing about Plumber Game 2 is the great number of levels, which never get redundant. Some levels you'll have to use all the pipes on the screen, even the immovable ones, while other stages may have pieces that act as red herrings. While the main timer is just to reward you with stars if you finish fast enough, you can't just start playing around in most levels. If you're not careful, the layout can be ready to set off a bomb you didn't notice, and all it took was you putting the right piece in the right place... at the wrong time. If you ever get stuck on this or the solution in general there is a large hint button that will show you the right solution... it takes a coin to use, so it's a good thing you gain one for every level you complete. Using the hint function naturally makes the game too easy, so you'll get more out of the game if you try to figure things out on your own. So get your monkey wrenches ready, there is thirsty monsters to be helped.

The novice levels are too easy, I think, and make the transition into the game too slow. It would be nice if there were some option to skip ahead to the regular levels.

Fun implementation once you get into it further, though.