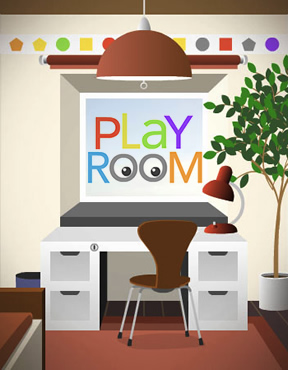 Kids get the weirdest toys. Dinosaurs with wheels. Monster trucks that roar and eat cavemen. Toy robot bears with color-coded buttons that correspond to wallpaper trim with arms that can be positioned to write encoded messages to other playmates. You know, the usual stuff. Playroom, a brand new room escape game from Imagia creator Kayzerfish, takes place in just such a location, and in order to escape from this abode, you'll need to do some serious code breaking, map drawing, and item hunting in this colorful and challenging title.

Use the mouse to do everything in this game, nudging it to the edge of the screen to move around and clicking on items to pick them up or take a closer look. There are a number of areas you'll need to step in and scrutinize, such as the posters and the travel chest, and their appearance in both views can be important. Keep a lookout for items hidden in plain sight, stuffed behind corners or sitting almost-hidden right in front of your nose. The little details can matter quite a bit!

Items automatically slide into your inventory, and in many cases you can examine them by clicking on them. Some can even be manipulated while in a close-up view, and you'll have to use this to solve a few of the game's many perplexing puzzles. Again, watch for small details, even on items, and think logically.

Analysis: The room escape formula is quite established at this point in time, and Playroom doesn't really deviate from those set standards. It does, however, take a bit more of a cryptic path to many of its puzzles, preferring to lay most of them out in tangled, often confusing codes. Bears with their arms raised representing letters? O...k... How about cities on a map that need to be connected? Or colored shapes that must be deciphered? Yikes!

Relatively difficult puzzles aside, the rest of Playroom is very well-constructed, featuring an easy navigation system, an inventory that works without too much hassle, and hotspots that are generous enough to allow you to do what you need to do without fussing with individual pixels. A few of the items are difficult to spot, but if everything was splayed out on the table for you, this wouldn't be much of a game, would it?

Another room escape game from Kayzerfish is never a bad thing, and Playroom looks to be a great start to a new series of games.

Use the plank to knock the battery down.

On the second page of the notebook (college block).

The toy's arms should match when it is facing the away from you, as if it were mirroring the pictures.

Use the five letters on the bear box.

The order is determined by the number: HONEY.

Half circles mean to add the numbers together.

A compass rose,indicating that you're currently facing east.

Look under the desk to pull the final length.

The letter 'T' on the door.

The Chest Wall is south, as indicated on the compass rose.

Use the plank to knock the battery down.

On the second page of the notebook (college block).

The toy's arms should match when it is facing the away from you, as if it were mirroring the pictures.

Use the five letters on the bear box.

The order is determined by the number: HONEY.

Half circles mean to add the numbers together.

A compass rose,indicating that you're currently facing east.

Look under the desk to pull the final length.

The letter 'T' on the door.

The Chest Wall is south, as indicated on the compass rose.

that face inside the closet asking you what the word is

startled the bojangles out of me. O_o;

I actually managed to solve the bear box before getting the clues from the blacklight and the robot. I was pretty confused as to what to do with either of them after having opened the box without them.

And actually, after reading the walkthrough, I still do not understand what the heck was going on with that robot clue. If someone could explain that, I'd be really grateful.

Just when you think you're playing a normal escape game...

there's a disembodied face waiting in your closet.

I may have lost it at that point.

Waaaaay to labor intensive for me. Once I saw that robot and figured I was going to have to spell something out, clicking each arm a bunch of times... ugh.

climb into the closet but it doesn't give me any kind of word.

Oh geez, you just have to

wait a moment for the face to appear.

Don't open those spoilers, or you will be spoiled, haha. I can't see the last

T on the door either.

The map was a little weird in terms of mouse-use, too. I still don't know if that was a click or drag.

i.e. the T is shaped by the door itself and the two planks on it. Once you've removed the middle plank, there's a T right there. Took me a while to see it too.

Not feeling this one. Also, that face was disturbing.

I didn't find the face disturbing at all. The way you guys were talking about it I thought it was some dismembered head, but no, it's just a friendly smiling face. It kind of reminded me of Nick Jr.'s old mascot, Face. Is this why he disappeared, 'cause people got scared of him? He was my favorite, and the face was the best part of the game in my opinion.

Just a bit of useless knowledge: the floaty guy's name is…

the face is wrong!!!
everybody knows that the bird is the word

I'm a bit shocked that this was "tedious" to so many. It was a cool bunch of puzzles, though there was some unevenness in terms of re-using the same code key. (Developers, please don't ever put red herrings in your code keys themselves, unless you have an extra ending.

The faces on the robot were irrelevant, right? And there was no indication that the compass rose wasn't one of the solution letters, other than the sound cue and font.

I guess I just like ye olde codebreaker puzzles more than most.

interesting game. i like the emphasis on finding and deciphering codes. wish the final answer had not been so 'intuitive' as i didn't even use the clue for the light box.

An escape game? On Tuesday? It's not even my birthday! :-D

To @ray9na's point, I just went through all of today thinking it was Wednesday because I saw the JayisGames tweet about this game and thought it was the Weekday Escape! Ah, JayisGames, you have me trained too well.

That was really fun. Although the

Other than that, the puzzles were engaging, the graphics were very nice and clean.

Anyone else notice the letter selector in the face puzzle has no "W" selection?

There's also no W on the semaphore chart. I think this was probably

You know, I love escape games. Love 'em. And along with the best, I've also played the cheesiest of them without really caring about the overall quality just to get my fix.

No doubt, this one has some good things going for it. But in the end, I have to agree with some others: It was TEDIOUS. Just too much monotonous work for the payoff.