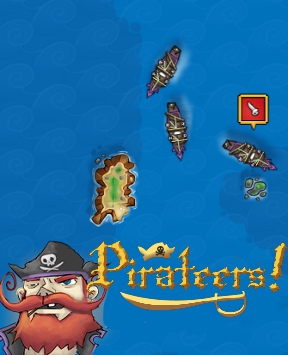 Yo ho! Yo ho! A Pirateers life for me! A top-down action adventure game by Labu Games, Pirateers tasks all you rascals, scoundrels, villains and knaves out there with proving to the rest of the world that you're the alpha and omega of swashbuckling. You'll have to take on navies, rival pirate fleets, every merchant on the coast, and deadly mythological creatures, if your one non-patched eye ever hopes to see the Neptune's Eye, the biggest collection of doubloons ye could ever conceive. Ahoy!

Most of your time in Pirateers will be spent maneuvering and battling with your ship. Use [A] and [D] to rotate your ship's direction, [W] and [S] to increase or decrease your speed, or the respective [arrow key] to do the same. Your cannon balls are launched from both sides of your ship with [spacebar] or a click of the mouse. Destroyed enemy ships will drop loot, collected by steering your ship toward it, or mousing it over. Loot can be sold in marketplace, for gold that can be used to purchase special weapons (fired with [shift]) or ship upgrades. Various bounty missions can be accepted with the [Z], [X], [C], and [V] keys, or with a click of the mouse. Scattered amongst the loot though, will be maps... maps that might just show the location of hidden troves, or maybe, just maybe, a clue to the Neptune's Eye.

Pirateers has a lot going for it. With its expansive game world, cast of colorful characters, and large number of quests, it recalls a stripped down version of Sid Meier's Pirates. It has a good balance between the immediate goal of slowly improving your ship, and pacing the endgame goal of the search for the final treasure. There are a couple of barnacles on Pirateer's hull: the difficulty curve is a little too front-loaded, some of the mission-types start feeling grindy after a while, and the game's grammar/spelling, not great even at the beginning, degrades ever more as time goes on. Still, maneuvering on the high seas, smashing hulls with cannon-fire has an undeniable appeal. So, pillage, plunder, rifle, and loot away, me hearties!

Fun game, but can anyone tell me the difference between the cargo and the loot box?

Can someone explain the minigame? I really can't make any sense of it and its just way to random

It's kinda like a weird reverse minesweeper; whatever number you see when you dig, count out that many tiles out in any direction up, down, left or right, and make a box. It will be in the perimeter of that box. I made the mistake of thinking that you counted the number of tiles directly from the hole to the treasure, but moving sideways doesn't add to the count. Pretty confusing if you haven't done a lot and paid close attention.

Note that if your cargo is full, items you pick up will automatically go to the loot box. Sometimes these may be more valuable than the stuff in your cargo, so you might want to check the loot box and shuffle stuff around to ensure you bring back the most valuable items.

Thanks Colin! Now can anyone tell me how to beat the boss? I can get rid of his sentinels, and I'm maxed at stats, but all I can seem to do is get his attention before his shield kills me.

@littleghost
The boss is quite hard; you need at least 1/2 - 3/4 hp when the sentinels are down. From there, it's just spamming at the boss until he goes down.

I don't know if it's intended, but the oilships heal you if you're not on fire. As a result, I avoid killing them if there are no fire ships around.