What do you do with an action game sequel? What do you do with an adventure game sequel? What do you do with a pirate game sequel, ear-ly in the morning? Well... if it's Labu Games' Pirateers 2, the sequel to the original Pirateers from 2012, well, then I'd suggest playing it, no matter what the time of day it is. It takes place in a time long ago when merchant adventurers roamed the seas, and a parrot on the shoulder was still considered a swank accessory. It is a time of legends, no more famouse than that of The Artifact, a treasure so valuable that anyone who possesses it could remake the entire world. You are only starting out on your pirating career, but thoughts of The Artifact drives you forward. Be smart, be strong, and be quick, and the seas and all its bounty will be yours for the taking. 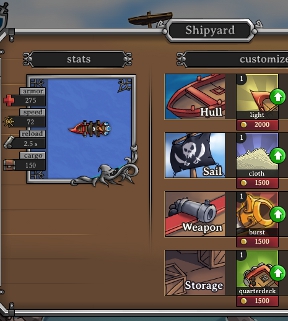 You steer your ship by using the [arrow keys] or by clicking a position in the sea to travel to. There are three meters attached to your ship to take notice of: your Hull's HP, which determines if you stay afloat, your Sail's HP, which determines if you can sail at top speed, and the Weapon Reload Bar, which determines if your cannons are ready to fire. You fire your current weapons by right-clicking or hitting [spacebar], and switch to your sub-weapon with [tab] or clicking it in the task bar at the bottom of the screen. The task bar also contains your crew and their special abilities, activated by clicking or with [1], [2], and [3]. The booty you collect from fallen ships or missions you accept can be sold at various ports on the map (which opens with [M]), or at your home base at the end of the day. You then use the money you earn to repair and upgrade your ship, hire crew members and unlock new abilities, all while completing story missions and seeking out clues to the location of The Artifact. Until then, though, the world is your oyster!

Rather than being a sequel, Pirateers 2 is more akin to an upgraded version of a familiar franchise that's released alongside a new console: the Super Pirateers World to the original Super Pirateers Bros 3, so to speak. The graphics in particular have gotten a significant boost, with larger, more detailed sprites being not only prettier to look at, but more intuitive to maneuver in battle. Making different factions in the game being much more recognizable on sight definitely makes it easier to avoid hitting allies by mistake (especially since they'll fire back!). The host of new customization options are a little overwhelming at first, but that game is generous in letting you experiment with different styles of play. The characters you meet are memorably goofy, with a lot of "arrs" and "mateys" thrown into the dialogue for good measure. Some of the mission types available are a little hard to distinguish, but there are a lot of them, and if they all tend to relate to the central gameplay mechanic of "shoot at things till they stop moving", then at least it's a mechanic that's tried and true. 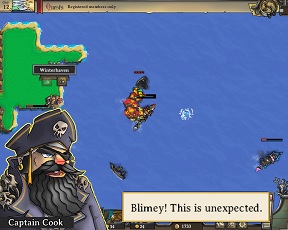 That said, with its posting on Steam Greenlight, it's obvious that the developers have high ambitions for the game, and that puts the flash version in an odd place. To wit: microtransactions, or rather, one microtransaction that I would say isn't particularly well-implemented. No one can begrudge giving money to creators to fund their game, and certainly the small price is one most deserving. Still, when a small-but-sizeable chunk of space in many of the in-game menus are simply given over to options you can only pick after purchase, it rubs the wrong way, especially considering that they are options apparently open to the enemy ships you fight, like repairs at sea. When literal pirates are driving you to make a game purchase, you know it's the hard sell. Still, in comparison to the huge amounts of game you do get without paying, it's a minor issue. As I said of the original, Pirateers 2 is the closest you're going to get to Sid Meier's Pirates in a flash window, and that's not a comparison made lightly. So ready your sails, adjust your eye-patch and get ready for Pirateers 2 to way hey, blow the casual gaming audience down!

The tutorial is a pain, seriously. Just offer me some info if I want it, not force me to click through it, and its buggy as well (right mouse click doesnt work in tutorial but is in normal game fine), later it says I can use mouse or keyboard, I can only use keybord to progress it.