Hey, you know what's a good time? Spending a lot of money to hurtle down a remote mountain slope in the freezing cold! Your indulgence in this mystifying pastime somewhat predictably ends poorly, however, when you trigger an avalanche that leaves you stranded, cold and alone, miles from civilization with only an obnoxious fat woodland animal to keep you company. At least, until you stumble across an isolated mountain resort with helpful guests. In fact, one might say, suspiciously helpful... ERS Game Studio takes the reins from Codeminion for the hidden-object horror adventure Phantasmat: Crucible Peak, the loose sequel to the original Phantasmat. 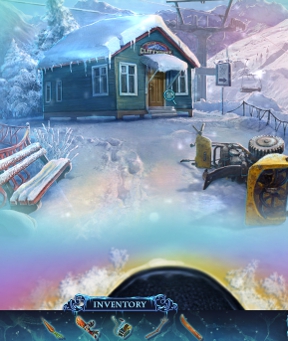 Luckily for you, you've got the skills needed to escape this chilly deathtrap, and those skills include clicking things, solving puzzles, rooting through hidden-object scenes, and having cryptic visions. You'll gather a variety of items as you explore and discover clues about this remote, lonely locale and its odd inhabitants. Like its predecessor, Crucible Peak also has an optional match-3 mode, which can be enabled on any hidden-object scene, and allows you to swap icons around to gather eyes that instantly root out items on your list. The difficulty for the match-3 games ramps up as you go along, with frozen blocks impeding your progress, but you can earn items like knives and explosives that will clear away certain icons and allow you to proceed. But speaking of progress, isn't it strange that you find your efforts to rescue everyone seem to keep getting thwarted? Isn't it mysteeeeeerious how the very people who insist they want to help you never lift a finger to do so and keep making charming Freudian slips about how you'll never leave? If a group of people blissfully living in the hollowed remains of a ski resort surrounded by the decades-old devastation of an avalanche doesn't set off a red flag or two, you can expect your Darwin award in the mail shortly. 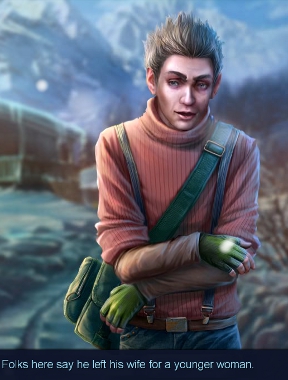 Analysis: Crucible Peak is one of those games that just sort of comes across as effortlessly gorgeous. ERS's method of animating their lovely character artwork has really come a long way from its nightmare-inducing beginnings in earlier games, and the characters here are fluid and expressive, complete with solid voice acting. The scaling difficulty and more puzzle-like aspects of the match-3 sequences make them much more fun and engaging than before, and being able to switch modes on the fly means you'll never find yourself stuck, which is welcome when the scenes start repeating halfway through the game. Though the puzzles themselves still aren't very difficult, their colourful presentations and creative efforts to deliver something different are still appreciated... especially if you've spent a lot of time playing the same puzzle types in hidden-object adventures over and over. You know. Like if you reviewed these things for a living, and one more "use the newspaper to catch the key on the other side of the door" puzzle is just going to push you right over the edge and turn you into some elaborate, oddly specific mastermind who only kidnaps developers and forces them to run a deadly maze of game-cliches for your own twisted amusement! Ahah. Ahahaha. AHAHAHA!... whoa. Uh. Sorry. Went to... a place there for a moment.

While ERS can always be counted on as reliable developers who do quality work, however, the change in management is noticeable and somewhat jarring if you're a fan of the original game. Where Phantasmat was a game structured around its core mystery and characters, Crucible Peak feels more like a story trying to work around your typical adventure gameplay. Taken on its own merits the game is actually really enjoyable, but it's that its visibly different in style and focus so that fans of the original hoping for more of what they enjoyed will be put off. That's not to say you won't enjoy it, however, since though slow to start, the game does a good job doling out cutscenes and frosty interactions to keep you interested even if you'll probably figure out early on what's happening and why.

Though a different beast from the original Phantasmat in many ways, Crucible Peak is still a gorgeous, engrossing adventure. The main game will take most players around four hours, more or less depending on their difficulty level and the puzzles they skip, with another hour for the bonus chapter. Apart from one or two cringe-worthy scenes and a veritable smorgasbord of frozen corpses, Crucible Peak is actually fairly creepy-lite, and any fan of stunningly visualised supernatural mysteries will want to give the demo for this one a try. It does sort of make me want to have a talk with the developers on pet care, though, because according to one puzzle that has you match up animals with the food they eat, cats eat... yarn. Oh well. Can't win 'em all.