You know what the worst part of dealing with ghosts is? It's not how scary they are or how they keep you up all night with their anguished moaning. No, the worst part is the ectoplasm. That stuff gets all over everything. If you don't want all your worldly possessions covered in slime, you might just want to ghostbust by proxy in Phantasmaburbia, an RPG by Greg Lobanov, creator of Dubloon, Assassin Blue, and a variety of other titles. 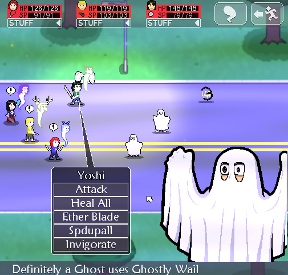 Phantasmaburbia stars four kids and their spirit companions who are tasked with saving the town of Owl Creek from an extradimensional invader. Much of your time will be spent running around exploring ghostly locations and finding goodies using a top-down view. When you encounter a roaming enemy, you'll use your mouse to battle ghosts, spirits and demons using a battle system styled after the ATB combat seen the Final Fantasy series.

The battle system is simultaneously simple and complex — you can succeed through grinding and brute force, yes, but smart play will get you further with fewer issues. There's also an action element at play during combat: several of your characters' attacks and many enemy attacks involve short mini-games to enhance or reduce damage, so you'll need to stay on your toes. There's an elemental system, stat buffs and debuffs and other nuances to consider as well, but things stay quick and snappy and battles rarely feel like a slog. Since enemies are clearly visible while exploring, it's even possible to avoid confrontation altogether if you're not feeling up to it.

Battle's not all that's going on here, though. Each spirit companion has a unique ghost power, ranging from telekinesis to possession, and you'll put these to work solving puzzles throughout the game. While they're not a walk in the park, pains were clearly taken to keep the puzzles from becoming overwhelming as well. It's not uncommon to walk into a room that seems painfully complex at first glance but which turns out to be fairly simple upon closer examination. There's a definite balance struck between difficulty and accessibility where you'll never find yourself stuck for days in a single room because you just can't figure it out. 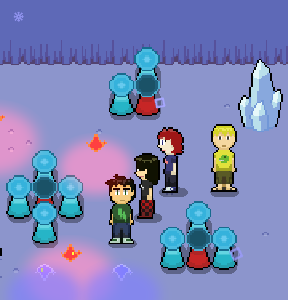 Analysis: The presentation of Phantasmaburbia is fantastic. Everything's got an endearing Saturday morning cartoon style and the spooky music suits the action, while the writing was clearly inspired by classic games like EarthBound. The enemy designs are great as well — you'll fight everything from a standard white ghost to a "standard" man in a white ghost costume (dubbed "Definitely A Ghost") to elementally supercharged animals. Battle animations are simple but functional as well. You won't see any hour-long spells here, but there's also more going on than colored blobs flying around.

The plot helps reinforce that Saturday morning feel as well. This isn't a horror game, but things are just surreal and spooky enough to stay true to the setting and keep the proceedings interesting. Our heroes and their spirit companions are believable and interesting; nobody grates on the player and nobody steals the show from the rest of the cast at the expense of everyone else. Perhaps the best aspect of the plot is that it's not really forced down your throat. Cutscenes are frequent but never turn into endless, snore-inducing walls of text. You're told what you need to be told, given an idea of where to go next, offered a taste of plot if you want it and allowed to enjoy the game on your terms. The most enjoyable aspect of Phantasmaburbia, and perhaps its most surprising, is the game's depth. This is a game that doesn't go the increasingly popular indie route of relying solely on nostalgia to sell itself; you're getting value for your money here. For instance, the second act of the game involves exploring a variety of dungeons based on the game's elemental pairings. When you go through a dungeon, its opposite is closed off. It's entirely possible to replay the game and see the other dungeons, which feature substantially different structures, enemies and puzzles. This sort of feature, combined with the game's various optional side quests and collection quests, go a long way to keep the game fresh. The first playthrough will likely last around 9 hours and there's a good chance you'll want to play again to see what you missed.

All in all, Phantasmaburbia is a pleasant surprise. The name of the game during development was clearly "fun"; Banov has taken the Japanese-style RPG and strained out the bits that simply don't add fun to the genre like random battles, painfully difficult puzzles and agonizing walls of incomprehensible plot. What we're left with is the essence of a great game. It's fun, it's deep and it's a game that anyone would do well to try, even those who aren't necessarily RPG fans.