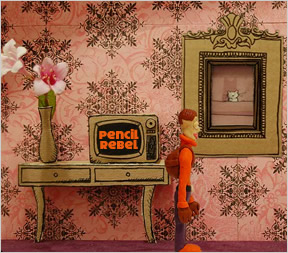 Pencil Rebel, by Grzegorz Kozakiewicz, is not by any means a challenging game, but what it lacks in difficulty it more than makes up for in wonderful, amazingly creative artistry. I was totally taken with its plasticine stop-motion action and beautiful, dollhouse-like environments; in fact, I'm not sure if I've ever before seen a point-and-click game with such style.

You play Bert, an escapee from the Elf Kingdom. Bert must rescue his friend Dr. Escalup, another escapee who was recaptured by the Emperor of Elfland's agents. This mission will take him through 11 different gorgeously appointed rooms, solving (very) simple puzzles along the way, and ultimately to his final battle with the beast guarding the poor doctor. While playing, pause a moment to appreciate the love and time that went into creating Pencil Rebel; the gameplay is really an afterthought, a convenient and entertaining format with which to showcase the designers' talents. In this case, that's not a bad thing.

wow. i guess i'm the first one to comment and I need help!

I really enjoyed this one. I didn't even miss having more involved gameplay because the environment was so captivating.

what do you need help with?
it seemed pretty easy to me...

I'm stuck at 16% at the flower scene where you can select your language and scare snails.

Cute little game, reminds me of The Neverhood. :)

I worked my way through the rooms until I got to the guy in the cage at the end. I have:

the key from the bird, and a harp/bow thing to kill the bird

I can't find where to get these things. I've tried backtracking, but I can't get the whole way up. I'm afraid I missed something near the start and can't go back for it now. Anyone who finished this know if I've done myself in, or am I just missing something?

Nevermind, I got the

slingshot from the bartender

, not sure how though. I'd tried clicking on it before, and nothing happened. Weird.

Very beautiful game, but these great scenes made me wish for some more interaction. I actually enjoy these easy games more than the bang-your-head-on-the-wall ones, but I really think some meows from the cat in the picture or being able to read more stuff in the library would have been nice. I was a bit sad when I finished it, I would have loved to linger a bit more in this environment, if only just to see random and utterly useless things happen.

Got a little worried when the bird disappeared at the bottom of the screen for about a minute (still alive) but then it reappeared - just to meet his end :D

That was really good, and easy as well. I liked the

'please recycle' circled in red on the cardboard in the electrocution room.

I don't supposed anybody got the fourth secret and could tell me what it is?

The fourth secret is

in the electrocution room. Click on the cardboard cat.

(he is obscured when the mobile phone slides up)

so, all down in the dumps, I wander through my regular sites looking for something to provide cheer and...

How could I forget?!!

(am female, despite name, no stalking will ensue)

thanks, stupidcheeseboy. glad you enjoy the column. ;)

Take a moment to watch the production movie which is linked at the end. It's amazing watching them create the game with exacto knives and cardboard.

i loved this game, very sweet and fun. the effort that went into this is awesome, i loved the lil extras like the eceipts, lol

An artistic little gem! I think its simplicity is key to being able to relax and enjoy the environment that has been created.

Take the time to watch the production video. What an extraordinary amount of work.

I was able to complete the game without uncovering all of the "secrets", so it has that replay factor. A longer game would be a plus. I'd sure like to see more from this designer.

the key and the slingshot

.Could someone help me pleeeease?

Never mind.I got it!!Yay!
But when I realised, I thought " how very stupid of me" (>~ I really like the "cardboard dollhouse look" .
I wish I had one like that!!

Reminds me of Douglas TenNapel's game "The Neverhood"
The environment/style is very reminiscent of that game.
Doug TenNapel is the creator of Earthworm Jim, Nickelodeon's Catscratch, and several Five iron Frenzy album covers, if that helps with who he is.

Excellent!! And just what I need during my little break on the last week of summer reading programming! Argh!

I want to buy a T-Shirt too.

Lol not a good start for me. I suffer from Spheksophobia and nearly ran a mile when I seen that wasp.

Oh wow. Brilliant. A little gem of a game. And a possible sequel set in Italy? I hope so.

stuck.
I have a pickaxe, paperclip, and 20 euro note.
I have been to the bartender, who says to come back later. (and the room beyond, with the caged professor where I need a key I don't have).
If I go back a screen, I can go back up the ladder to the safe room, or back one more screen to the left, but I can't get anywhere else. I assume I need to climb the dangling string next to the ladder, but I have been unable to interact with it, or anything else, so I'm just wandering around these rooms...

finished it many times but i still can't find secret#4

where is "cardboard cat"? i only find those in the pictures... do i have to close the cellphone? and how?

There's a room to the right of the cage room. Once you've been there, the bartender will give you what you need.

I finished without a walkthrough somehow. Neat.

I'm not sure how I got past the tic-tac-toe safe, but here's what I did:

I looked at the total on the receipt in the book on the shelf to the right and clicked those spots on the tic-tac-toe board as if it were numbered like a phone. When I got to the zero at the end, I didn't know what to do. I lost a game then won a game, then the safe opened.

How does that part work?

i dont understand this game..
can someone help me? after i scared the snails, i`m stuck in a room with a door, three tables and(i think)three cabages. i tried to click everything but it doesnt work. is`t still loading or what? i realy dont understand

I think all you have to do to open the tic-tac-toe safe...

is win a game of tic-tac-toe

What a beautiful game! I found 12 places and 5 secrets. Perhaps it should let the player know when he/she has found all there is to find. I hope there is a sequel!

It sorta does, because before you do find everything, those circles are empty.

Don't turn on the radio! First, go to the electrocution room. There is a cat that you cannot see after turning the radio on. Clicking on it will give you the exact code to pass the phone, if you couldn't already figure out the radio's clue.

when you enter the room, go right. You should see shelves and a mobile phone. On the shelves is a red cat, (fourth column second row) that gives you the code for the mobile phone once you click on it. The puzzle can also be solved by turning on the radio and playing the tune that you hear onto the phone. Now, you won't be able to see the cat if the phone slides up (which is done by flicking the switch on the bottom of the cardboard 11 on the wall), so make sure you click it before you attempt to solve the puzzle.

Sorry about the confusion caused.

Simple game, but BEAUTIFUL design. Simple design too, but it adds to the game. Other level designers for games should take note.

how do you get the pick and paperclip

i found 12 places and 5 secrets.
will post a walkthrough if anyone needs one.

Pencil rebel is amazing, especially the room with the carved vegetables. Simple gameplay, fresh idea, beautiful execution. It's this kind of mixed media stuff that gets me really enthusiastic about computer games. Samorost, Menulis, 10 Gnomes, that one where everything was made of origami... I love them all!

That was and something different, didn't find the #3 secret though.

Am I the only one getting directed to Disney's site? I just get a preview for Toy Story 3. For real! What's going on! Ahhhh......Disney's taking over!

Looks like the link on the American Flag got changed, but the links for other regions were ok. So, I've updated the links above to take you right to the game, bypassing the initial screen with the incorrect links.

Posted by FAL back in July 2008:
"i dont understand this game..
can someone help me? after i scared the snails, i`m stuck in a room with a door, three tables and(i think)three cabages. i tried to click everything but it doesnt work. is`t still loading or what? i realy dont understand"

@ FAL:
I've emailed the creator of Pencil Rebel, Grzegorz Kozakiewicz, and he replied very swiftly. We should be able to move the balls/cabbages from table to table, but for whatever reason, there's a glitch for you and me and we can't play. :(
Looks to be a beautiful little game.