On the surface, Paradise Beach resembles a casual building game like Coconut Queen. The gameplay, however, is more similar to the classic of the tycoon sim genre Rollercoaster Tycoon. Join Mr. Gates and his cute — and occasionally annoying — granddaughter as they develop beachfront property. Travel to six different islands and work with the pair to develop a fun beach experience, all the while helping endangered species, uncovering dinosaur skeletons, finding pirate treasure, and all the other fun things that happen to folks who create vacation beaches. 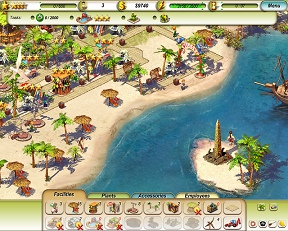 You begin on the first island with a pristine beach ready for development. Mr. Gates and Emmy will walk you through an easy tutorial as the tourists begin to arrive... and begin to complain. The first complaint? Not enough sidewalks. Because it's dreadful to have to actually walk on the sand when you go to the beach. The learning curve is smooth and gradual as different complexities are added, such as structures that break down, garbage that needs to be picked up, vandals, drowning swimmers, power shortages, and the ever and constantly complaining tourists. By the end of the fifth level you will have learned the basics of developing a resort and can move on to the second island, where more developing fun awaits.

Every island has five levels, each level building on the one previous. When you begin an island all you have is a stretch of beach and some basic structures, plants, and accessories. Manage to placate enough tourists and you will get a higher beach rating, which unlocks more complex structures. Lay down sidewalks and folks will want ice cream and fruit. The minute you build the facilities, however, the tourists will then complain about the long lines to get said ice cream and fruit, not to mention they will immediately begin littering your formerly pristine beach. Place garbage cans, more structures, and begin hiring employees to keep buildings repaired, keep the beaches clean, keep the tourists from drowning, and keep the vandals from wreaking havoc. One of the best parts of play? Beating up on the vandals until they leave the park.

Tourists will also complain about the lack of more advanced facilities such as swimming pools (because who wants to actually swim in the ocean when they go to the beach?), spas, clothing stores, and theaters, as well as complaining about the lack of shade trees (because who wants to sunbathe in the actual sun?) and other greenery. Tourists are also forgetful, and will constantly be losing things they want you to help them find: sunglasses, towels, purses, wallets, passports, cell phones, and swimming trunks. (Swimming trunks? How did they lose their swimming trunks? Never mind...) 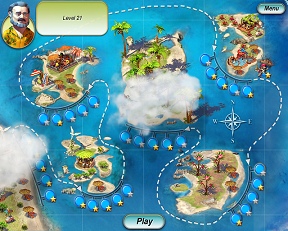 Development itself is a breeze. Tabbed menus at the bottom of the screen organize facilities, accessories, plants, and employees. Other nice features include buttons that show coverage grids of your various employees, as well as grids that highlight greenery areas (showing where more is needed) and garbage areas (highlighting where the trash is piling up). Simply click on an item (if you have the money to build it) and click on the area you wish to place it. Items such as sidewalks and plants can be dragged to create large areas without constant clicking. Employee coverage areas are controlled by little flags that can be moved and dragged around as needed to move the areas under their influence.

Although each level in an island builds on the one before it, each can be played separately, making Paradise Beach perfect for fun, breezy, casual gameplay. After each island is completed it unlocks a "sandbox" mode, where you can go in and develop each area as you please. Completing all 30 levels of the timed mode unlocks a special 31st level that takes place on the pirate island and which involves making a lot of tourist pirate ghosts happy.

Analysis: Major effort has gone into making Paradise Beach not only fun to play but also a joy just to look at. The beach scenery is so realistic you can almost feel the sand in your toes. Your little animated tourists come in all shapes and sizes, and wander around actually using the facilities built for them. Watching all the action can become so engrossing it is easy to forget that there are actual goals and a ticking clock. The music is light and breezy and matches the scenery perfectly. 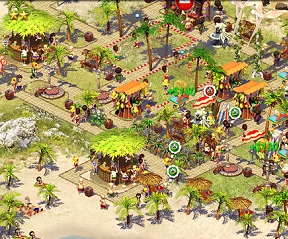 The real pleasure here, though, is the gameplay itself. The learning curve is perfect, not so slow as to be boring or too quick, piling on information faster than you can absorb it. As Goldilocks would say, they got it just right. At the end of the last level of each island the player has the option to move on or continue developing the current island, affording the chance to sit back, relax, and just enjoy watching the action.

It is obvious the developers were aiming for whimsical, but some of the dialogue between Mr. Gates and Emmy can be a little... annoying. Nevertheless, Mr. Gates has lots of sage advice for a novice beach developer, much of it dispensed at the loading screen between levels. Despite the sometimes annoying Emmy, Paradise Beach is a light-hearted, amusing romp of a tycoon management sim, managing to be simultaneously challenging and relaxing. Pull up a lounge chair, grab a drink from the tiki bar, and start building!

I really don't mean to complain - but this is not really a walkthrough. It's basically a preview of the goals as you will see them at the beginning of each level anyway. What I would be interested in is knowing how to MAKE those goals before the time is up so that you can achieve a gold star on every level. Thanks!

gambitgarrisson-how to reach gold
Unfortunally Paradise Beach is a pretty random game. We all have the same challenges, but how many people are loosing items, how many are drawning (beside the life guard secured places), how may trouble-maker you have, when which building will need to be repaired and so on, is completely random.
Also random is, how many people do have complains about long waiting lines or if they just do go to the next shop of the same kind.

That makes it nearly impossible to write a walkthrough in the meaning of a step-by-step-solution as we often offer it for this kind of games.

This is a really good game, well worthy of purchasing. It has all the elements I usually look for in this genre: pretty graphics, lots of different things to build (more so than other casual building games, including lots of decoration items such as plants, fountains, etc), the option to continue playing after all the goals are achieved as well as continue or restart any individual level later on, and even replayability value with a great Sandbox mode on large scrollable maps.

The untimed mode is very welcome too as I like to play games to relax more than anything else -- this is not a very difficult or superclicky game at all (right up my alley). The employees do their jobs very well, which removes a lot of stress from the game as soon as you can afford hiring them, and also allows you to enjoy the exotic locales and spend some time decorating instead of running left and right pulling your hair :}

Is anyone else having problems with the game running really slow? I'm not sure where to look to fix this problem, esp. if it is a problem with my PC.

I do know that I have the most current drivers for my graphics card, and DirectX11. I buy a lot of these kind of games and this is the first time this has happened. Every other game I've got runs fine.

Any advice would be greatly appreciated!
Thx!
~kit