Alright, normally I like to make some joke about how Papa Louie of Flipline Studios' Papa's series is some big shyster who cons everyone into working for him, but this one is sort of your fault. In Papa's Pastaria, the latest installment in the addictive simulation series, you're desperate to book a hotel in exotic Portallini to attend a friend's wedding, and you're so excited to see that there's just one room available that you book it right away... without bothering to see what all those terms you didn't bother to read entailed. Now you're stuck working overseas for Papa in his latest venture, slinging pasta to order for some of the pickiest customers around. What's that? You want exactly three pieces of chicken on your linguini and you won't tip me if its a degree over al dente? Geez, it's like everyone in this town is LARPing as Gordon Ramsay. 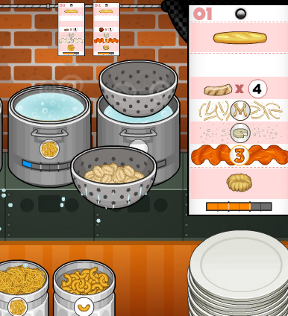 If you've played any of the Papa games, then Pastaria's formula will be pretty familiar. Customers will arrive throughout the day and you'll take their excruciatingly particular orders, making sure not to keep them waiting too long, and cook everything just the way they like it. This time around, that involves cooking whatever type of pasta they wanted to the firmness they wanted, making sure to stir at certain points and then drain all the water, and then dress it with the sauce and toppings they want as cleanly and accurately as possible. Most of them will also want some sort of breadstick, toasted to perfection. Get everything done as fast and tidy as you can, and they'll give you a big tip you can spend towards upgrading the restaurant, with everything from faster cooking to decorations. Because every underpaid server loves to turn around and spend their tips on their employers. But here's a new twist you might not expect... this time around, you've also got a dining room to contend with, which means you'll have to hire servers as help who will bring you orders from customers seated there!

The dining room actually feels like a weird addition since the only thing it really adds is an extra layer of difficulty just by adding more customers without really noticeably changing the gameplay. Here's an idea... when are we going to see a "wipe the edge of the plate" option for those of us who know accidentally spilling some sauce or cheese is only a tip-killer if you haven't mastered the art of swiping a paper towel around the rim? Papa's Pastaria potentially already feels a bit more challenging than the others just because of the extra fiddliness added to everything... bread will cool off if you leave it too long, pasta takes time to drain and shaking it too hard to speed that up deducts points, throttling customers because they wanted their precisely four mushrooms evenly spaced deducts from your tip... oh wait, that last part was just in my fantasy. All of this will be familiar to fans of the series, and while some people have bemoaned the lack of serious change to the games since it first came out over six years ago with Papa's Pizzeria, many fans will appreciate the way Flipline has continued to tweak, refine, and subtly enhance the games without losing that addictive gameplay that brought them in the first place.

The problem is that if you take too much away, or add to much to a Papa's game, it ceases to be one.

I never really have a whole lot of patience for these games, once you figure out the pattern of what to do when, how long folks can wait, and what an acceptable level of sloppiness is, the game really loses all interest.

I have never been able to finish one, not even Jacksmith, which was awesome. They just fail to keep things interesting after a few rounds.

So maybe it would be a good thing to cease to be a "Papa 's game." I thing the series needs a massive shakeup, not just a tweak or refinement.

Anyways, I'm off to do a few days of pasta making before it starts to bore me. :)

Maybe there could be some kind of crossover game. Maybe the 2 top villains form the two Cactus McCoy games could have survived their run in with McCoy and got revenge by kidnapping Papa and are now holding him hostage in the veggie world. Or something like that...

A crossover would be fun. I really enjoyed Papa Louie 2, and I'm sure there is something that could be done with all that.

Within the first two weeks of play on this one, I'm getting consistent +95% ratings for the day.

The dining area is a nice touch, and makes sense for less-mobile pasta meals, but doesn't really add anything to the game.

As always, more customers each week doesn't change things up. Every customer arrives at the same time each day, so developing a pattern of play is easy.

Once I got a booster on the first cooker, and a warmer on the bread oven, I started getting 100% on wait and bread scores almost every time. Just put the next bread in when you finish one, and you're good to go. No need for the second toaster at all.

Focus all additional funds into themed furniture for special occasions, and your wait score will be just fine.

Get the timers for the cookers, so you don't go over. Score doesn't seem to be affected by leaving them in the colander after drying, just don't lose your mental order by leaving them there.

Build score is the trickiest, but so long as you evenly distribute the food, and cover all the pasta (but no plate) with sauce, you'll be fine.

Oh wow. This is REALLY not my genre.

I panicked and quit when I ended up with more simultaneous customers than I felt like I could deal with... on day two.

I tried day two again with a clearer mind. I got an Order Station score of 75%, and that was the worst of it. Maybe I just tried to assign myself too many tasks at a time.

I just bought a doorbell, so that should help make the juggling easier.

Day three complete. My Order Station score is slipping lower and lower... I try to take the orders one or two at a time-- I think that's all I can manage without losing track of something-- but the customers have to wait a lot longer for it.

Maybe I'll go play something else.

Sonic, the doorbell does help with juggling, but to really do it well you need the Cooker Alarm.

I, too, was sitting at 75% wait scores the first week. Once you get the door and cooker alarms, you can multitask a lot faster. Also get furniture. ChiliFest, the "F" icon, is the first occasion.

Nathaniel, I don't see the harm. It's pretty much a dead thread otherwise.

I know I'm waaaaaaay late to this, but is that a lil Dora in that window? That makes me happy for some reason.

Hahahaha, yes, there is a tiny Dora toiling for Papa's restaurant in there. :) Good eye!