I'm not big on large bodies of water at the best of times, but even in my most dramatic moments (of which there are many), when I think of things that could go wrong on a cruise, "Entire ship and passengers getting sucked into an alternate dimension by vengeful frozen desserts" somehow never made the list, and yet that's exactly what's befallen everyone in Flipline Studios' action-packed platformer Papa Louie 3: When Sundaes Attack. You begin the game as the ship's captain, determined to rescue the other people, presumably because "lost all crew and passengers in an alternate dimension" doesn't look real good on a resume, and you're going to need to get your hands dirty to do it. Use [WASD] or the [arrow] keys to move, jump, and swim, while tapping [spacebar] attacks, though the controls are completely customiseable from the pause menu. Each area is filled with coins and more to collect and baddies to wallop, and though some itty-bitty enemies can be taken down with a single whack, others will need more to bring them down. Each customer you rescue is then unlocked to play as, and since they all have their own different abilities, replaying levels as someone else can help you unlock new areas or reach something you previously couldn't! 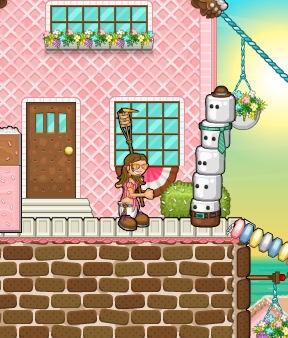 I found myself laughing a little while I played Papa Louie 3, not because it was necessarily funny, but because as a child of the Atari/NES era, getting something this polished and expansive for free is still a little ridiculous to me. While figuring out what's scenery and what's a platform, as well as which of the wildlife is harmful to the touch, is initially trial-and-error, Papa Louie 3 is a beautiful little game. Its design is so creative and colourful, and the levels are so big and diverse, that it feels light and cheerful in a way that calls to mind classic console platformers like Donkey Kong Country. The controls are responsive, apart from a bit of sluggishness when trying to change direction midjump, and the impressive amount of unlockable characters, costumes, and challenges helps take some of the sting out of needing to replay the levels so much to get %100 completion. It's still not exactly reinventing the wheel when it comes to gameplay mechanics, but there's a lot to be said for the clear amount of passion and attention to detail Flipline Studios clearly put into making a platformer that's solid as a rock. If you love Flipline Studios, you know they never do anything halfway, and Papa Louie 3: When Sundaes Attack is a fun, vibrant platformer for just about anyone who loves old school gameplay with a decidedly modern style.
Play Papa Louie 3: When Sundaes Attack

There goes the next few hours of my day...

The sound effect for sliding plays even when both music and sound effects are turned off. So does the helicopter sound for the nutty butter enemies. There may be others too, but muted my whole computer before the end of the first level. I'm not big on sound.

Anyone have a good strategy for the first boss?

Yaay, my favorite Flipline series gets a new entry! ^^

I've figured out the first boss:

After the first two hearts are gone, the only time you can successfully jump on his head is when he's in the middle of throwing a punch. Stand in front of him while he winds up, then jump when the fist comes at you and hit him while his arm is still outstretched.

This is great. The marshmallow stacks have to be my favourite enemies, they are just so adorable!

On the 2nd level, I can't save the third customer, needing the "Climb" skill. I've even waited to have a second customer with that skill, but I can't get up there! Anyone?

@sohoho
What is causing you problems? Have you tried jumping over to the opposite wall? You have to do that several times on the second map.

I'm having problems with the third customer on level 4. I'm pretty sure I know where and how:

But I'm always a couple pixels too low.

Now to wait for it to go up on Kongregate so I can play it without the "sticky/unresponsive controls" problem...

... and it turns out I was COMPLETELY wrong about level 4.

Foodini can glide there, but is stopped by the cracker. Turns out that was customer #2 and #3 was after the boss.

Now it's time for me to fail a bunch more times on level 5...

I'm getting the same strange sound issues too. I've turned off all the sound options in the game, and even muted chrome through my volume mixer, but still when my customer gets hit by an enemy I can hear a noise.

I can't find the second customer on level 5! I've used gliding characters to explore everywhere I can, but I can't reach her... let alone find her!

Has anyone played with Ivy more than the minimum necessary for the Team Effort badge? Wow, those loopy plains are hard to aim. I used her on level 8 to rescue Kingsley. Man, was that a pain. I should have waited until I had scooter and run Ivy through an easy level.

Loving this game! I am totally stumped on how to beat Radley Madish on level 9, though. I keep trying to avoid him, in hopes that we will eventually end up somewhere where I can fight him, but haven't had any luck so far. None of the baddies seem to affect him, when I try to guide him into their paths. I haven't figured out how to hit his chocolate rockets back to him - they just hurt me. And he doesn't seem to be affected if I try to make them blow up close to him. Please help!

I agree with you - Ivy's ammo is tough to control. In general, I don't have much luck with the characters that throw something. I'm much better with whips and weapons that are swung. The beauty of that teamwork badge is that you don't actually have to complete a level with each character. You just have to use each of them once. That's the way my in-badge counter seems to be, anyway.

6,097 Views
2 Comments
chrpa— Jayisgames needs your help to continue providing quality content. Click for details Masa is back, yay! We've got a long escape with lots of complex puzzles and it does take a while to figure them out. This game is hard...  ...

262 Views
0 Comments
jayisgames.com— Educational video games are a great tool for learning these days. No matter what skeptics may say about the use of technology in younger and older ages, there is no denying that new generations are notable for their dexterity and...  ...

598 Views
0 Comments
jayisgames.com— It used to be that gaming was limited to PC, console, or handheld devices like the Nintendo Gameboy and its modern counterpart, the Switch. Games had to be bought, ripped out of the carton, and installed. However, there's a new...  ...

1,175 Views
0 Comments
jayisgames.com— NVIDIA's 3090ti has just leaked a few weeks back. And even before it launches, there are already rumors of the next-gen 4000 series coming at year end. And yet, the current 3000 series remains hard to find for the average...  ...