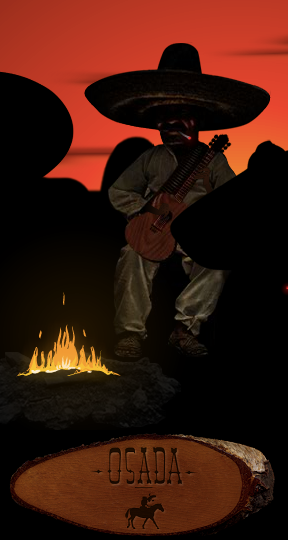 If there's anyone in the land of Casual Gaming that has experienced the work of Amanita Design, and hasn't, in some small way been charmed, I don't think I've met them. Tempting fate as that sentence may be, the worlds of Samorost, Machinarium, and Questionaut were instant-classics of both gamecraft and art and more than worthy of the awards they won, both from us, and others. That said, while I can appreciate that the success of the company means that they can take their time in formulating each new project, I do start going through withdrawal symptoms round about the eighteen month mark. Fortunately, the sleepless nights are over with the release of the distinctly desert-themed Osada. It may be more of an interactive music video webtoy than a game proper, but frankly, I'd be fine watching Amanita Design animate a phone-book.

Taking place in a dreamlike vision of the landscapes of a Central-America that never was, Osada has a distinctively Latin flavor to it. Using the mouse, there is no more goal than clicking the various hot-spots to trigger delightful animations and play captivating music. Some of the scenes might be said to have point-and-click puzzles in a loose sense, but it's obvious that the point is not to challenge. Whether it's the cigarettes of a fireside mariachi band, shadowy wolves howling at the moon, flies swimming around bottles of hooch, desperadoes in a diabolical drinking contest, or gunslingers in a televised ping-pong show-down, Osada makes beautiful music.

As much as I enjoy Osada, I will say that it's more intensely surreal than the fancy of Amanita Design's other works, having a touch more violence and sexuality than what is usually seen from the developer (though the latter is limited to a quick look at a mermaid tattoo). Plus, while I wouldn't personally say its surreality reaches the level of "disturbing", this game has a collection of faces that takes the sunshine deep into the Red Uncanny Valley. However, while kids might want to skip this one, the sound and animation are top-notch, the various fugues you can make are delightful in their polyphony (naturally, the whole game ends up being a round), and altogether it is a worthy addition to the Anamarita canon. Light up the old calumet and give it a try.

Click on the various red lights to add and remove instrument players. When you are finished listening, click the fire.

Click the coyotes. Eventually their cries will cause the moon to rise. Once it has risen all the way, click the moon to move on.

A Cool Bottle of Fire-Water

Click on the flies to make them move around the bottle. Click the native chief in the back for some burps. While the center insect is moving, click the woman in the foreground's face. A new chief will show up. Click on him to move on.

On Track with a Song

Click the door to enter the train car. Click each of the instruments to add them to the song. When you are ready to move on, click the pull-brake by the player on the left.

Click the faces of the natives. When you are ready to move on, click the cowboy that pops up in the window.

Brew and a Tune

Click each of the men's faces to serve them a drink and add their harmonica to the sound track. When ready to move on, click on their note pad to add a final tally to each of them.

Click on the television. Move your mouse around the man's face. Eventually, a split-screen will occur. Click the paddle in the holster. Click the dog. Click the bird. Click the arrow. After you have clicked each a couple times, you'll be able to click the face of the man you can see to move on.

Canoe Do a Fugue?

Click the bubbles coming from the calumet. After a while, click the face of the cowboy vacuuming. Click each of the camouflage bugs, starting from the right... and the game starts again!

I don't see why there should be a walkthrough since this is not a game, though anyway.
I still got to try the online version and see if the high quality offline version is worth it.

This game is a total trip! Really cool art style, and lots to do and hear.

I don't drop comments off that often, but... brilliant! I loves me some Amanita.

As I commented on another site...although I understand this is supposed to be psychedelic/surreal, it deals with a lot of offensive stereotypes of indigenous peoples. This game makes me uncomfortable, in that respect.

(and definitely not offensive!)

One comment - this is not set in Central America, it's set in North America, mainly, Mexico, Texas, and the Southwestern US.

Great game, really strange and fun like you would expect.. and no more offensive than a South Park episode or an Indiana Jones movie, or a James Bond flick.

Well that was suitably and refreshingly odd

"...I'd be fine watching Amanita Design animate a phone-book." LOL well said! Not much of a game, but still the fun strangeness and unique art that is all Amanita. On a side note, I've had contact with them and they are THE nicest guys.

Aren't the people from Amarita design central-European?! (Answer after few seconds browsing: Why yes, yes they are, Chech...)
@ Liebs & everyone else: When playing the game the thought about offensive stereotypes crossed my mind also, and I was curious if/what someone would comment about that...
But please, bare with us who come from ex socialist countries, I'm sure the authors didn't meant to make anything offending to anyone!
We're just different and distant cultures, authors probably grew up in a state in which political correctness ment "If you don't talk positive and only positive about the ruling "party", you could loose your head". Probably simmilar to my country - wearing or just posessing jeans ment negative politic statment and we didn't know video consoles existed untill the start of 90-ies...
The USA were (are?) just too far away to properly know all the rules, regulations and a posible faux pas someon can make with the wrong use of indian iconography...
And speaking of indians, the way I see it in the game, I don't mean native americans (or whatever someone prefers to be named...), but indians in a sence of classical western movies, which, lets face it, were for a long time (are?) only possible means of knowing something at all about a folk.

That was so bloody kool thx so so much!

This may be the most brazenly creative interactive art that I have yet come upon. It's themes are addressed in a manner indifferent to political correctness, which made it less offensive to me than amusingly absurdist. It has a very late sixties early seventies psychedelic atmosphere; reminds me of Yellow Submarine. Nice use of musical interaction and stylistic editing. Dare I say that this is refreshingly childlike and life affirming stuff?

well, I'm from central Europe(from Poland). I'm not happy to tell you that you're quite not right- yes, we are post-communist countries- but it's not like "say sth and loose your head". Moreover, the breakdown in most countries was in 80'. People who are now in their thirties (even late) don't really know how it was, and their freedom od speaking and political sense is not determined by communism. It's also the stereothype, I think Americans don't really know that it might be offensive to Europeans. Is it like this? That we don't really understand each other? About the Osada? It's just a really artistic way of showing atmosphere and mind-connections to western-movies climat and popculture, made by someone who did not grow up with problem with acceptance between different members of USA society.
Dear mr1black, I guess you won't read my comment at all (because your's is from year before now). That's a pity, I'd love to discuss the subject with you. :(

I almost never play games that require sound, so I had skipped this one. I'm glad I didn't skip it forever! I thought it was gorgeous and funny and not in the least offensive. Instead I saw it as a comment on how modern/pop culture has redefined certain aspects of the cultures of the people of the desert (and, as a native Southwesterner, I agree with another poster here that this was set in North America, particularly northern Mexico, Arizona, New Mexico, California and, maybe, Texas).

What a treasure. Amanita Designs is full of the kind of smart, weird brains I wish designed every game in existence!