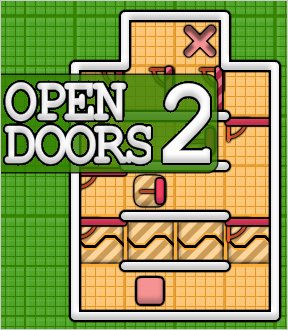 A sequel to one of the most interesting puzzle games of last year has arrived, with an arresting makeover and just the right amount of extra spice. While the first game eventually wore thin by working its lonely gimmick to the bone, Open Doors 2 features compact puzzles with just the right number of new doors and mechanical gizmos. With a sparkling presentation and superb level design, this is one of the best puzzlers we've seen so far this year.

Your objective, as a pillowy square in a graph-work maze, is to reach the "X". You only need press the [arrow] keys to get there, but your path is complicated, naturally, by a whole lot of doors. Shove them closed from one side; open them by going the other way.

Your progress saves automatically, and if you are a completist, you'll come to appreciate that. There are two seperate medals to collect for time used and steps taken on each of the game's 36 levels. The difficulty caters to both puzzle-heads and more casual travelers. It's not too hard to beat the game (not all that easy, either), but collecting all the golds, especially for the time-based medals, will mess you up.

Analysis: Developer Ozzie Mercado has replaced the stylish but messy blueprints from the first Open Doors with a bright, almost glowing palette that makes it absolutely clear how to interact with things. I can't stress how important it is, no matter what "style" or "mood" a designer is reaching for, to entwine the look of game objects with their behavior, and that's exactly what the makeover here has accomplished. It also doesn't hurt to provide six different color schemes. Extra bravo for that.

Rather than overloading the game with new features, Mercado added just enough moving parts to keep things interesting for 36 levels. You have your levers, which react to your movement only along their primary axis. You have your floors that disappear after being used (always my least favorite part of any tile puzzle, these appear in blessedly few levels). You have your double doors, which act as traditional one-way obstacles.

Each level blends these elements together in exactly one unique way, and that means there is exactly one problem to solve at a time. When your brain starts to swim, just break it down in pieces. The previous Open Doors could be overwhelming once the levels got too large and complex, but here each puzzle is vigorous, asking assertive questions and rewarding you cleanly when you find the answer.

Top it off with a curious, folky soundtrack ("I'm going ho-o-o-oooome…") and you have something that could be the standard for casual games. A simple idea, an attractive approach, and an agreeable length. Good show.

Here is the complete walkthrough!

A big thanks to Boopbug for writing this walkthrough!

already stuck on 9. any help?

Nevermind
Got past it

Hit the switch by going down. Then go down pass the horizontal door and then do the following moveset

go down and around to the LEFT, and apply the same moveset, instead this time, instead of going down, go LEFT to open the door next to the striped panel, then go down and around, then up and follow your way to open up the door next to the exit. retrace your steps back to the furthest left door. open it, go right once, open the switch by going up, go left, down, and right all the way to the exit.

i cant even get level 2 help!

I get spammed with something the site wants me to download when i try to play, i'm i the only one?

You'll need to make a few circuits around the "track" so that doors you closed the first time can remain open the next time around.

The first thing you need to do is push open that gate above the bottom-left corner. Go back around, open the gate in front of the exit, then go around again to escape :)

Any hints on 19? I'm two moves shy of the gold and I just cannot figure out how to avoid them -_-

Kelai: I got a repeated request by a Java applet "Website Statistics" for unrestricted access to my computer -- definitely not something to approve. It's probably either a malicious ad (but it didn't go away when I reloaded the page), a really bad idea by Armor Games, or a misconfiguration.

We are looking into this issue right now. The game should not request any restricted information from the user. Can you let me know what browser and OS you are using? (I'm on a Mac using Firefox and I haven't had this issue come up) Thanks!

What did it ask you to download? (Java) And what Browser and OS are you using?

We'll have the game fixed shortly, but rest assured there is no malicious code in the game.

you can finish in "26" moves if you use the UNDO button. Is actually 32 moves.

you only have to go to the top row at the very end to do and undo theat switch.

[Edit: Please only post once. The comments are going for moderation and it can take a few minutes, before we see them ~ Kayleigh]

Need help on number 29. I see that if you solve the bottom left part, then when you go through the top right, you should be able to get to the x. However, it seems to be impossible to get over the "bridge" (the piece that disappears when you flip the switch) that is at the end of the puzzle pieces at the top right. If someone had any hints for that top right part, please share.

Before you enter the top right part, flip the switch at the bottom left part again.

Thanks for the help sara & Brett =D

[Edit: Please post your questions only once. Repeated posts for the same question will be deleted. -Pam]

#34:
The people saying to use undo are wrong. That apparently was a bug that has been fixed. The REAL solution is to:

#29
Not sure if this is the fastest way, but it works.

-Go down to the next "room," flip the switch down.
-Go back up one room, then right one room.
-Set the doors to allow you to go down. In the process of going down to the next room, you should flip the switch once.
-Open the door right-side door to the exit, and return the way you came.
-You should be able to make a CCW loop around the map without flipping any switches and return to the exit.

Here is the complete walkthrough!

A big thanks to Boopbug for writing this walkthrough!

Badly stuck on level 30 and the walkthrough solution puts you in a place where it's impossible to do what it says after step 9. I can't help thinking that there is either a step missing there or that it says "zig" when it should have said "zag."

The solution posted for 33 does not appear to work.

most of them are a little broken, just one thing miswritten or something.

Please someone help on 30. the spoiler here wont work

The walkthrough for Open Doors 2 has been corrected. So sorry for the problems!

Thanks for fixing the walkthrough. My brain needed closure. :-)

it says here that there are 36 levels where is the walkthrough for the lvl 36??

Oh boy, a really nice game.I figured all out but the last myself; normally I need a walkthrough much earlier. :p

Walkthrough for level 28 needs an extra "left, up" at the beginning of step 7..