Once Upon A Timeline

Can you imagine what your life would have been like if your uncle was Doc Brown? All the crazy adventures you would have gone on? Well our protagonist in Once Upon A Timeline can, as his aunt is working on a time machine. He soon finds out it's not all fun and games, though there is a great deal less worrying about destroying the timeline. He and his aunt are pretty lax about that. In Awfindlay's free indie point-and-click adventure you play as a nephew who goes to visit his aunt after she stopped writing him back. Entering her home, he runs into her murdered body, and when someone else comes a'banging on the door he jumps into the large box in the corner to hide. Fiddling with a few things he finds himself hurtling through time itself. Can he use his aunt's technology to save her? Sure. Why not. It is a time machine. And it's easy to use as well. Using the mouse you adjust the time at the bottom to be between the years 1880 to 2022 and then pull the lever. Other than using the mouse to look at or pick up items, the only other thing you'll need is the escape button to get out of the time machine. And maybe with that you can escape this predicament. HA...oh wait... no good? 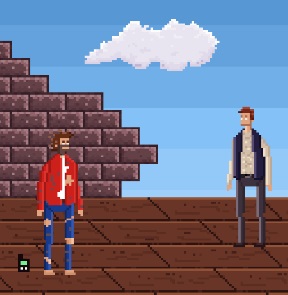 While not a long game or a overly complicated one, Once Upon A Timeline is pretty creative with how it's set up. You are given some hints about where to go in the years with your aunt's diary, which the nameless hero adds to when he realizes what his next step to be, but other than that you're on your own. You'll have to play around with the times to see what year is right. Instead of blindly guessing and poofing in a flash of light to your destination, you get to see the changes happening around you as you travel through space time. Heading to the past you'll zip through previous house owners and the construction of the house itself, and you'll see even more when you go to the future. It's pretty cool to watch in its pixelated form, and though it may take a bit longer to get through, it makes that time enjoyable. It also helps you see where you may need to go, and gives you some ideas on what's next on the agenda to save your aunt. Even though you may piece together what you need to do, you have to make sure your character is up to speed with it all, otherwise he'll just comment on the items, ignore your curses at him, and move along. It's not too hard, though, to get the ball rolling for him. Even with the ending being a bit silly, Once Upon A Timeline was a great entry for #adventurejam which means it was done in only two weeks, and it's not one to just pass by.

Play Once Upon A Timeline

Once Upon A Timeline Walkthrough now available!

This looks terrific. Diving in!

That was a fun one. Bit of weirdness about the way certain things needed to happen, like

you couldn't pick up the bulletproof vest for fear of being seen, even after you'd built the wall, until you'd already given your aunt the helmet.

That aside, very fun mechanic and art style. Definitely worth a play.

So I finally decided to play through this. It's a little rough around the edges, but I suppose that's to be expected for a game created for a jam. I feel like at least one point had somewhat iffy logic...

If I was going to murder someone and they were wearing a knight's helmet, I wouldn't try to shoot them in the head anyways.