Olav and the Lute

Its title might make it sound like a morning zoo radio team, but Olav and the Lute, a music-focused point-and-click adventure by Shelly Alon, and Johann & Daniel Von Appen takes a much more cerebral work for its inspiration: the 1990 Lucas Arts adventure game Loom. Olav and the Lute might add a heaping dose of post-apocalyptic wasteland to its fantastical aesthetic, but the concept of exploring a world with quite a bit more magic in it than our own, and using the power of melody to put right what has gone wrong, is well intact. Check out the game's official website for a download version and also, if you like the game, be sure to shoot a message to the developers through Shelly Alon on Twitter. Your comments will be music to their ears!

Click to direct where Olav should walk, with the pointer icon automatically changing to show when an item can be examined or interacted with. Early in the game you will pick up a blank songbook and a magic lute. These will be key to progressing. The lute has five different note tones you can pluck, and you will be able to cast spells by plucking certain four note sequences. As you discover these sequences, they will be added to your song book. Playing the sequences in reverse, however will reverse the effects of the spell: an unlocking spell becomes a locking spell, a spell for fire becomes a spell for freezing, and so forth. It's up to you to change the world, for better or worse. 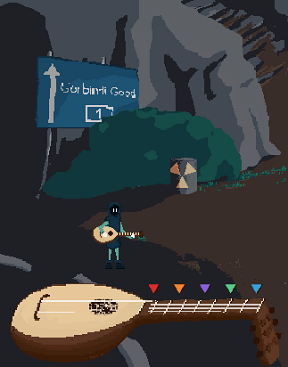 While Olav and the Lute would likely not have been created without the existence of Loom, it does a good job of setting itself from its predecessor. First of all, Olav is a surprisingly sassy son-of-a-gun. There's kind of an expectation that protagonists of these kind of artistic adventures will be ominous, if not altogether silent so as not to break the zen, so the subversion that comes with Olav's snark (and, uh, a little gratuitous swearing) is a knock on the side of the head, though it is not used so much that it doesn't fit with the mood. It's just that the few things he says make him come off a bit like any of us would act if thrown into a post-apocalyptic wasteland filled with mysterious artifacts and runes for unknown purposes, given a magical guitar and told to get at it. Who can blame him? The world he's exploring is similarly unique. The Japanese influence in the scenery and characters give it the serenely creepy (or creepily serene) vibe of a Buddhist temple several years after a nuclear disaster, and its a delight to piece it all together.

The musical spell-casting is at the center of this game world, and Olav and the Lute provides some quite interesting puzzles in that direction. Some lateral thinking will be required to get through the game, and that's meant in the best possible way. If anything one wishes there were almost a few more red herrings along the way. After all, is there any gamer who, once they've gotten their hands on a fire spell, won't immediately try to figure out all the things they can use it on? The game is rather short, with playtimes typically averaging between fifteen minutes to half an hour, but packs in a lot of atmosphere and ideas into a small map despite a strange ending. Olav and the Lute is a unique bit of gaming, continuing the trend of point-and-click adventure games being able to effectively integrate music puzzles into their world.

Play Olav and the Lute

This was a nice game. I expected it to have a creepier turn, but I was disappointed with a rather abrupt ending that did not give any revealing developments to the "story." However, I hope this means there will be a sequel because I really enjoyed playing the game. It's beautiful, even if its purpose evaded me.

I loved this game! My only complaint was I wanted MMMMMMOOOOOORRRRRRRRRREEEEEEEEEEEE. And for some reason, never getting to know

how did awakening the loom effect the world?

sort of made it all feel huge disappointment instead of the great enjoyment I was having right before the end of the game snatched me up.

I would encourage the authors to add a bit of time, where we can walk about after, and before being snatched away, get a time to see what we have accomplished.

This was a good game, however... I only gave it three stars because of the random and pointless use of the 'F' word...and I'm a 32 year old construction worker. I LOVE the 'F' word. It just didn't belong in this game, and sort of shocked me out of the world that the game did a very good job putting me into.

The ending was sudden, indeed, but moving, the way the light and music builds to a crescendo. Very nice.

But that darn language just seemed so out of place that THAT is what I ended up thinking of after the game ended, rather than the story.

I'm a little late to the party, but is anyone else getting this phenomenon where the character disappears while walking left until he speaks or walks right again?