NCR Games made some pretty brassy claims when they contacted me about their upcoming indie match-3 RPG Oafmatch, whose demo is currently free to download with hours of gameplay (and does NOT require Steam to install), and even though the full version is sitting in limbo pending Steam Greenlight success, I still wanted to check it out, especially since its demo has enough content for players to really dig in to. In it, you guide Knuckles the Oaf on his secret quest for Oaf kind, and help him gather "easily impressed, literate companions" along the way. Knuckles likes to fix problems with violence, and that means taking part in Puzzle Quest-style combat where you match three or more adjacent gems of the same colour to attack your foes and unleash special abilities. With a whimsical yet snarky tone and a few twists on a familiar formula, Oafmatch looks promising... with some caveats. 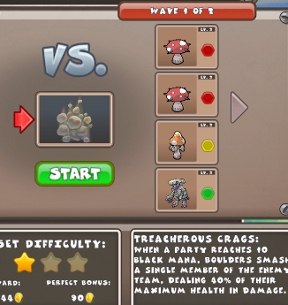 Oafmatch, as you might expect, plays a lot like Puzzle Quest. Matching gems makes your party attack, with each party member having a corresponding colour of gems that generates mana for abilities, and you can use equipment to help defend and attack. In addition to simply bashing themselves against you, foes can deploy special abilities of their own, typically in the form of gems that will count down to unleash the attack on the field unless removed by matching. Unless they have purple backgrounds on their portraits, instead of making their own matches on the board, enemies typically generate mana at a fixed rate per turn and then use it to unleash abilities. Most levels even have a special terrain ability that will trigger once you reach a certain amount of a particular mana type, and can really help out in battle. Don't get too cocky, as some encounters have several waves of enemies to fight through. As you gain gold from battles, you can spend it to upgrade your characters, and you'll find new equipment with unique abilities too. Increasing the difficulty (represented with stars) for each stage gets you better rewards, Defender's Quest-style, making for a lot of replay value for completionists. You'll come across extra quests to take, shops filled with items, and even trainers to better increase the levels of some characters. 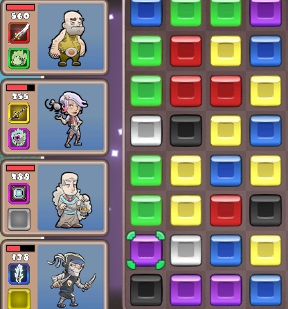 In a lot of ways, Oafmatch hits most of the right notes. It feels casual, with its breezy, funny dialogue and light-hearted tone, but while the mechanics are easy to pick up, they have just enough depth and strategy to them to make things challenging. Blindly matching gems will only deal so much damage, and you'll take down enemies a lot faster by focusing on gaining mana to use weapons and skills, and party members can be shuffled in formation to receive less damage at the cost of dealing less themselves if they're taking a beating. It does tend to feel a little grindy since characters only level up by spending gold, and items tend to be pretty expensive to buy. One of its biggest negatives might actually be its presentation. It's not that it looks bad, it just looks a little rough and simplistic, with a bland and blocky UI, repetitive music, and a washed out colour palette that lacks the eye-catching luster match-3 games are typically known for. As a result, it might wind up being overlooked for more visually dazzling games in the genre, which is a shame since Oafmatch feels like it has a lot to offer the match-3 fan looking for something that has a lot of fun with its gameplay and has a great sense of humour to boot. It's the sort of thing that might be best suited to tablets, since it feels like a game you'd want to pull out on the go, or play kicked back somewhere comfy rather than bound to a desktop. If you like match-3 RPGs, Oafmatch's demo is definitely worth a look, and if you want to see more, make sure to vote for it on Steam Greenlight.

4,549 Views
1 Comment
chrpa— Jayisgames needs your help to continue providing quality content. Click for details After investigator Roberts and his companion Atzalar together with professor Fargleton successfully got rid of an ancient fearsome demon, Farold Roberts with Atzalar go to the abandoned factory...  ...