North Wind: Trill of Consciousness by Henry Gosuen is a creative take on the platform exploration genre. You control the tiny hero named Dir who moves through a blocky world of spikes and obstacles and maze-like puzzles. Instead of scrolling levels that keep pace with the protagonist, though, you do all the swiping yourself from a stationary point of view. It's a bit like Office Rush, Rooms or Continuity, only with a decidedly sweeter metroidvania feel. 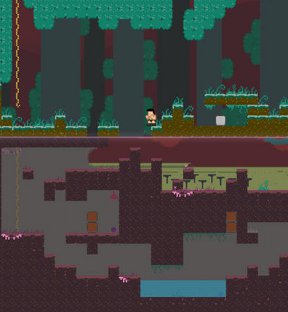 Walk left, walk right, jump. Those are the powers Dir has at his disposal, though later on he'll gain new abilities that let him do things like break blocks with his nose. For you, though, there are quite a few more options. The screen is divided into three horizontal strips that can be moved independently by a quick swipe across the screen. Changing the map changes the terrain Dir must traverse, creating interesting puzzles of the "How the heck do I get up there?" nature. You'll encounter bosses, traps, items and more as you unlock new rooms to swipe to. It's surprisingly exciting!

North Wind: Trill of Consciousness comes with one notable flaw: a painful and deceptive in-app purchase. You have three hearts that represent your life points. When those reach zero, you die. You're then given the choice to pay for a heart refill or to continue with a single heart for free. Each time you die you are given the same choice, turning a cute and entertaining game into a deep dark pit that wants to eat all of your money. Sure, you can play with one heart, but since the game carries a price tag in the first place, it feels a lot like a bait and switch tactic. "Here's a fun game you bought, it sure is neat! By the way, if you die you have to pay to play it the same way."

Hopefully the developer will consider addressing this in a future update. It's an ugly scar on the face of an otherwise gorgeous, creative and captivating game!

Note: An update has been released changing the way in-app purchases work! Now there are two free options that carry a score penalty, along with a minimum paid option that refills all of the hearts. Cheers to developer Henry Gosuen for the update!

I want to clarify that the in-App mechanic is more like boost, not a bait.

The death is a player flaw that cannot receive benefits for it.
I mean, in the game, if you die you can restart *near* the death place.

A) A chance: try again with 1 heart and find another safe strategy.
But the death counter will increase. (to remember how many times you failed)

B) Real punish for dying: you can reset the game, keep the death counter low and try a better performance all over again on the -last saved point-. (Each level up is classified as a level - is the save point).

C) Skip this and continue: Pay for 3 hearts and break the game. (I will explain down here)

Why don't directly continue with 3 hearts?
Because the player failed the task to survive. Continuing with 3 hearts would transform death into a flaw mechanic.

If you are with 1 heart and face a skeleton that have 3HP.
The "battle" would led the player to death, like:

If the player continued with 3hearts spawning near the death place, this would be the scenario:
Player: 3HP, Skeleton 2HP (skeleton can be killed without killing you)
Get it? That is why that is a price tag. To continue with 3 hearts will make the game difficult level drops to 0.

After two more touches, the skeleton would be dead, and the player with 1 heart
Player: 1HP, Skeleton 0HP dead.

It is like the Start scenario but without a skeleton. In the end, the 3 hearts continue transformed into a ~remove skeleton~.

So, dying would be pretty dull and the game pretty easy. Death would be part of a strategy! So to come back with 3 hearts in this game is considered a "boost". (Like Jetpack Joyride booster that permits to start running at 800m).

Coming back with 1 heart is a continue, a chance to make another "safe" strategy. And a struggle to survive. The cool about continuing with 1 heart is, if you make it right this time, you can, after defeating a boss, get a Big coin that recovers the 3 hearts! I tried to benefit the player for a real achievement on game.

It is hard to beat some bosses, but there is strategy to avoid taking damages on them.

In my head, continue with 3 hearts would break the game. If the player wants to break it, there is a price for it. If you think this is somehow evil, I can sincerely think to remove this feature, but still... remaining the 1 heart after death. :/

After thinking a lot I've made a decision.

I will remove the +3 in app in the next update.
Please, check the modifications:

Thanks for the review :D
This was pretty important for me.

Hey! First of all, I really enjoyed North Wind, every single moment of it. I wouldn't have reviewed it if I didn't!

I can understand the in-app purchase as more of a boost, but the reason I felt it was misleading was because I started the game with all three hearts. Each time I died I had to buy the game all over again to play it in the same way. If it were a free download, if you started with just one heart, or if the three heart upgrade was permanent, I don't think I would have felt this way.

Dying in a game is already a bit of a punishment. You lose your momentum, you might get a little mad at yourself, and you often have to play part of a level over again. Seeing that IAP, even though it was small, made the punishment a little too real. Like a tax on not being a skilled enough player.

I like your proposal for the update! The high difficulty is part of what makes this game so fun, and the new 2 heart/+5 deaths feels like a good middle ground.

We really appreciate you taking the time to read reviews and discuss the workings of your game! Thanks for releasing something as creative and fun as North Wind!

I must say I enjoyed the game up until the point, where I kept dying fom pointy things trying to pass some ice. I wanted three hearts but when I read it cost money and was only temporary I felt cheated. I really hate in-app buys, and this one really took the spirit out of this game. I will wait for the update discussed here before I play on.

I will update soon enough.
I've fixed this issue and I'm just waiting my teacher review the japanese script.
If it take too long I may launch a version 1.09 addressing this issue before the japanese language.

I love this game! It is very difficult but it's very fulfilling when you get past a difficult point. It is possible to quit the game and then you will start with three hearts from the last save position. But there you should be this option in the game in stead of having to quit manually.

At the moment I am stuck. I have 59/60 dark spheres but I can't find the last one ANYWHERE and I've looked through all of the levels several times. What am I not getting? I just killed the succubus on level three.

Thanks for the tips, too!
It used to have an automatic quit, but thats really mess up with the game somehow.
I will do more tests on this!

About the last orb:
Oh! This will be hard to know! Did you get the one in the Bottom part of the ship?
And generally people overlook underwater orbs! Look water spots! I think this will do the trick. :D

Thank you for your reply.

As to your other reply: I have thoroughly searched everything - including water levels and ship level. I only miss one, so it's strange. Could it be a bug? I will replay to see.

Mmm it is pretty hard to be a bug. The 60 orbs is all there. In the tests the players manage to reach the final boss also.

I don't want to spoiler, but here it goes a check list for some underwater and the most overlooked on the tests:

Level 4: Dark Forest (the jelly fish lake)
Down: 3 orbs (all underwater 1 on the middle, 2 on the bottom right)