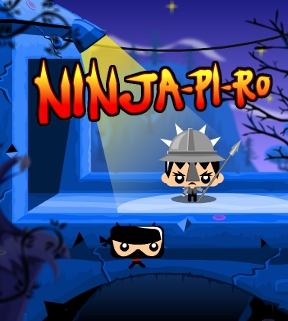 Evildoers beware, Ninja-Pi-Ro from Pencilkids is on the prowl! That's Ninja-Pirate-Robot by the way, the team starring in this point-and-click puzzle adventure. Apparently, a rare blue diamond has been stolen, and it's up to the titular characters to save the day using all their combined abilities. The pirate is strong and swarthy, the ninja is swift and silent, and the robot is scientific and... uh... ssssss... a robot. Look, this isn't rocket science people.

The idea is that each character is good for certain situations, and you can cycle through your team at any time by clicking on the transparent circle on them. Other transparent circles will be visible onscreen if you're controlling the correct character, and you can click on them to interact. The key is figuring out what character needs to be used in which order to proceed. Since most hotspots will only show if you're playing with the correct hero, it's a simple matter to cycle through them in each area to see what's missing.

Aside from not being accurate, since history has proven robots, ninja, and pirates cannot peacefully coexist, Ninja-Pi-Ro is also really easy. Even the puzzles Robot has to solve probably won't hang you up, and trying everything with everyone in any area takes hardly any time at all. As long as you pay attention to your environment, the solution will always be within your grasp. The game isn't too long, and will probably run you between fifteen minutes to half an hour depending on trial and error, and whether you spend time hunting down all one hundred coins hidden throughout the game. The coins don't serve any purpose other than to deduct clicks from your final score, since finishing the game in the least amount of mouse clicks will, as you know, cause you to win the internets. Do not fail me.

The end result is a fun, simple puzzle adventure with Pencilkids' signature cute style and charm. There's no way to lose the game, since using the incorrect character is only a temporary setback, and for Pirate electrocution is just a minor irritation. Is there a sequel on the horizon? Hope so! Maybe next time the team will meet up with their arch-nemesis... Samurai-Naval Officer-Alien!

Any hints for the 5x6 grid under the courtyard on the other side of the water?

Easy?! I had to consult the walkthrough twice. First time:

Knowing that the password on the keypad was "DIAMOND". I was trying all sorts of variations on "MADE IN U.S.S.R"!

It didn't occur to me that after weakening the robot's knee, I had to lure it into attacking me again.

Ok, so this is how you do that grid underneath the courtyard

Change to the pirate then dive down under the water, on the back wall you'll see a patter, use the robot to enter it into the grid.

Um, not to snark, but no. Does not work. Anyone want to put it out there explicitly?

Actually, for the grid,

As the pirate, you can swim through the water. So jump in, and then click the arrow at the bottom of the screen to dive down. On the wall underwater, behind the pirate, you will see a pattern that sort of resembles a spaceship made of black squares; this is what you need to recreate. The pirate can't hold his breath for very long, so you may need to dive a few times before you have it memorised, or written down. Go back to the machine on the other side of the water and use the robot to set the appropriate squares from black to white to succeed. I hope this helps.

Got a question about the screen before the guard.

Based on the walkthrough,after i solve the screen,the light turns off and i have a certain period of time before i climb to the top using my ninja charachter,then cutting the rope using my pirate charachter. I had to restart because the first time i waited too long. Is there a way to retry if you wait too long on that part? all the pirate could do is get electrocuted,so i assumed there was a restart. Thanks for your help.

Played this while waiting on laundry. Nice little game, fun and not too tough. I can't find all of the coins though. Went back through all of the rooms on the way out and still only found 98.

Upside to missing those coins is a reason to play again!

Irony: I asked for explicit, but was not so in my own post.

I actually used a screenshot and re-created the pattern that way, but nothing ever changed when I entered it.

I actually got bored again later and went through it again (closed browser in between). Worked the 1st time. Must be a bug.

I somehow managed to break

the grate puzzle. I really don't know what I did but one light is on and the other will not go on under any circumstances.

I reset the game and did it again no trouble.

you know, this isn't the first time that a game from this site that's really grabbed me has been from pencilkids. I really think they've got a good thing going on.

every now and then in their point-and-clicks I've gone to the walkthrough just to bail on the time spent on a code puzzle or whatever, but that's just the perfect level of difficulty for me. Difficult enough to reward me when i finally solve something, or even send me to a walkthrough occasionally; easy enough to keep me engaged in the little story of the thing.

I'm only halfway through this one, but so far, so good.

*snerk* Ninja-Pi-Ro (A.K.A. Team Useless) and the Blue Diamond.
They obviously still don't coexist very peacefully if they're useless... :D

Was anyone able to open that metal door?

Good game. I think the last Robot Puzzle could have used some more clues (I guessed the correct answer, but am not sure how I was supposed to know that) and only found 91 coins despite constant searching. Still, not a bad game.

Hmmm. Wonder why you guys can't find all the coins?! I found them all on my first and only try.

Badly needs a mute button. Ruined it for me.

If you mess up there, it will automatically reset the puzzle for you so that you can try again.

First time, no hints, 100 coins! I agree that the game is quite simple, but also a lot of fun. I am impressed with the smoothness with which it plays and the polish in the presentation. Not complex or deep, but an entertaining use of 20-30 minutes of one's free time.

I'm having trouble with the robot puzzle on the roof. The one with the A, B, the numbers 1-5 and the lever. What do you do?

@Arainach, the final puzzle's clue was

written at the bottom of the puzzle. It said

it was very very hard

@Ryleigh, in the room below, the robot can get a clue for the A-B-lever puzzle on the roof.

Oh, and where the clue is, the robot also has to

set it to A then B to enable the A and B sections on the roof. Once the roof A and B values are set correctly, you can pull the lever.

I agree about the mute button. Even more, I think every game should have one or two of those.

@Jigguest
Sorry about that, what I meant was

Turn into the pirate not the ninja, THEN dive down into the water and copy down the markings on the back wall, after that, go up to the grid, change into the robot, and enter the patter into the grid

Im sorry about the confusion
if there was any

Now this is a wicked RPG adventure that goes deep! Way to go Pencilkids!!!

i totally loved how the ninja 'sneaks' past the robot. XDD

This was an awesome little game, although it took me closer to an hour to finish. I have to agree that a couple of the robot puzzles weren't particularly intuitive (A/V B/II anyone?) and I groaned out loud (at work!) at the last one. But all in all this was a fun way to pretend to work this afternoon.

BTW...only found 99 coins. The number kept disappearing out of the little box. Did that happen to anyone else?