A new casual adventure game from Ghost Ship Studios, Nightmare Adventures: The Witch's Prison takes you on a dark and creepy tour of an abandoned asylum. The grim setting and somewhat unhinged events that transpire set an interesting plot that drives the game's thoughtful, fluid puzzles. Your reward for solving puzzles is more of the story, and you'll devour every tidbit of information the game gives you. 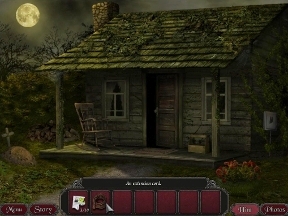 The star of the show, Kiera, learns she has inherited Blackwater Asylum, an empty mental institution shrouded in historical mystery. She sets out to shed some light on her family's involvement with the hospital. Soon, she meets a creepy guy named Quinn who, amongst other creepy things, is a huge fan of a TV show called Mr. Creeps. Oh, also, he's obsessed with Kiera and has all sorts of information on her, claiming she is some sort of "key" to whatever it is he's researching. And he's a member of a secret society called A.R.C.A.N.E. As you can imagine, the story gets more interesting from there on out.

Gameplay is lodged firmly in the adventure category, which suits the story-driven design perfectly. Each item you find has a specific and important use that you'll uncover within minutes of adding it to your inventory. No carrying around pages of trinkets hoping you can use them at some point. It's all fairly straightforward, and you'll use everything in your inventory before moving on to the next area, giving you just a few screens' space to explore with what you've got.

Kiera is very inquisitive and will divulge loads of information while you play. You can click on almost everything you can see. Some objects will hop in your inventory, some will zoom forward to give you a closer view, and the rest will summon Kiera's often dry commentary. Nightmare Adventures isn't without a sense of humor, and this is never shown more strongly than when you play a "hidden object" game called "unicorn.exe". A priceless parody. 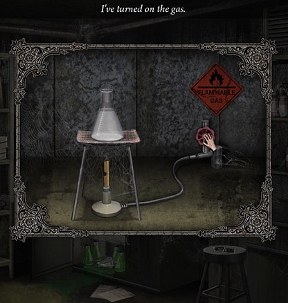 Analysis: The story is definitely the strongest drawing point in Nightmare Adventure, and if you can suspend your belief and let this girl go searching an abandoned asylum, you're in for a nightmarish ride. From not-quite-right gravediggers to secret societies, witches, and government cover-ups, Nightmare Adventures has just about every trope you could hope for, and it weaves them together in a satisfying way. Both present and past facts are uncovered gradually, filling you in on the history of the asylum while unfolding a disturbing tale of current events.

Puzzles in Nightmare Adventures are tightly composed and fit the setting quite well. You won't fumble with using items very often, as their purpose is usually quite clear (though not hit-you-over-the-head clear). Finding those items is almost always an exercise in logic. Need a battery for the remote control? What other appliances might have a battery you could steal? Completing the puzzles is very satisfying and has a strong room escape feel to it.

One extremely useful feature is Kiera's habit of taking photographs. Not only do these pictures save important clues you'll need to refer to later, they also serve as hints on how to solve certain puzzles. You'll also appreciate the "story" tab on the menu at the bottom, a handy little section that saves and summarizes plot pieces for quick reference.

The down side to Nightmare Adventures? Unless insane asylums aren't your thing, there's really not much to dislike about this game. The occultish story could polarize some players, but the puzzle design is solid, and the plot details unveiled at precisely the right intervals to keep you engrossed in the game. A superb entry in the underappreciated casual adventure category, Nightmare Adventures delivers exactly what the title promises.

I agree with the nice review. Great little adventure game! You can see that great effort is put in the story. For instance, all of the clickable objects/scenes have not one, but at least two comments, which is a great way to show Kieras thoughts and to flash her character far better than typical one line for one object, whether you click one, or 1000 times. I would like to see more of that in games with much greater production values.
Warm recommendation, if you're looking for casual adventure with pretty well written (if not entirely believable) story and great pace!