Nick Toldy and the Legend of Dragon Peninsula 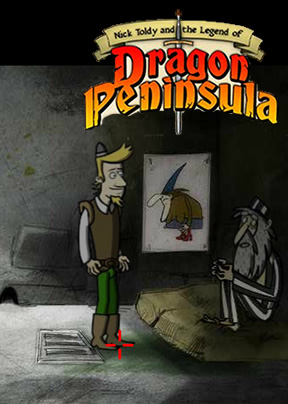 Red Herring Labs, makers of epic point-and-click adventures like Morningstar and Hetherdale, takes its high production values and evident love for the medium toward a more comic, Monkey Island-esque direction with its new game Nick Toldy and the Legend of Dragon Peninsula. Control a young man who dreams of becoming a knight, slaying a dragon, and winning a princess... or at least that's what the brochure promised him. But the reality of Dragon Peninsula is a little more... bureaucratic. His first major puzzle involves filling out a form and getting a permit. Doesn't sound too enthralling, but it ends up being both very funny and a good work-out to the inventory puzzle solving quadrant of your brain. You know. It's right next to the frontal lobe.

Adventure games all handle their controls a little differently, but the general concept of gaining and using inventory is the same. This particular game keeps your inventory handy at all times on top of the game window. Select an item by clicking on it and use it on hotspots in the scene, on other inventory items, or on the small magnifying glass to get more details. All clicking in the game is single left clicks, no need to hold, drag, or right click. You can tell an object can be interacted with by hovering over it. If it gets a small text label, like "man", you can click on it. The menu contains sound and music controls and an option for saving the game. 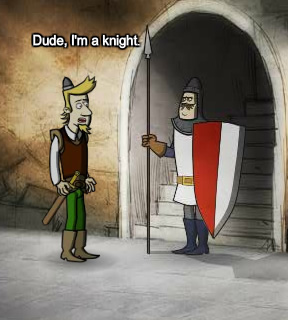 Analysis: Puzzle solving and item combining in Nick Toldy can be a bit fussy. The game avoids strict linearity by giving you several puzzles to solve at a time, but puzzle solutions are occasionally illogically specific in what must be done first. For example, without spoiling you with an actual solution, you'll have among your items three items that seem like they go together, like a chain, a clasp, and a pendant. But the game will only accept the combination of combining the chain and the pendant first, and then adding the clasp. Combining the chain and clasp gives you a "this is no help" kind of message. This can cause you to erroneously think you're stuck, even though you actually have the right idea about what goes together.

For the most part, however, the game gives good clues about what to do without holding your hand and making it too easy. Items picked up early on are kept and reused later, which is sensible and definitely more realistic than the escape game hero who chucks away his screwdriver. Yet the inventory never gets overwhelmingly large and traps you in that boring slog of trying each one of forty-seven objects on a hotspot. At an hour plus game length, Nick Toldy and the Legend of Dragon Peninsula will give those who yearn for the glory days of Sierra Entertainment a meaty afternoon's entertainment, and probably win some new fans to the genre as well.

Play Nick Toldy and the Legend of Dragon Peninsula

Nick Toldy and the Legend of Dragon Peninsula Walkthrough

Put Apoash's Rhyme on top of the pile of wood.

Add the Oil to the coal inside the furnace.

Nick Toldy and the Legend of Dragon Peninsula Walkthrough

Put Apoash's Rhyme on top of the pile of wood.

Add the Oil to the coal inside the furnace.

This was a pretty fun game, although some of the puzzles were annoying in how strictly they required you to do things in a specific order (and made it look like some objects were completely useless until you got to exactly the right point). I think there was about one completely useless object in the whole game:

The bench in the tavern

As a warning, for those who play with the volume off, the ending switches to voice acting only.

This had some good moments, but I thought Morningstar was quite a bit better.

?! I didn't even see it was clickable. Used to that old "put it near the border so people don't notice it" trick, but it's nearly on the transparency of the menu buttons.

Fun so far. The level of detail in the animation is great.

Where do I find the chain in chapter 2?

Shudog are you refering to adding a somewhat familiar cat with buttered-bread for a body? :P
Anyway the game is great and load filled with Monkey Island references.

I think Shudog was referring to that bit near the end with the mine carts.

the mine switches. it was confusing on which to pull and which not to pull, as some said top, some said left, etc and it was unclear which ones to do.

Any help would be appreciated.

i cant find the hook to make the fishing rod!!

at the swordsmith shop, use the spear to knock the chandelier down, and after it falls, the candles, wheel, chain, and hook will be there for you to pick up.

also if anyone out there has time to read my help question above, please give me an answer on this.

This is amazing. :D Definitely one I'd play again.

In addition to the physics fail... BAKING FAIL! You have to dissolve yeast in water first, then add the flour.

Nice game, but I agree it is annoying in requiring a specific order for combining items or doing actions. I also dislike the walking to and fro - a clickable map would be nice after the first time you arrive at a place- and there were unnecessary long double screens for a single location.

I've got to the part where I've given Lord Apoash a

and been told to

find him a new outfit

. But then I got stuck, so eventually looked at the walkthrough to find that

the witch was suppose to have left her hut. When I go to her hut she's still there, and I can't take the curtain or broom because she says 'hands off'.

I've spent a long time trying to solve an unsolvable puzzle! Very frustrating. Anybody else get this or have a solution?

Figured out the mine cart puzzle!

To break open the sealed doorway, the mine cart should be EMPTY, and travel RIGHT, LEFT, LEFT.

Gone over the mine cart puzzle several times and systematically. Do I have to

bend the rail I got

or is it simply a matter of every switch properly placed? What am I doing wrong?

Arrrrrgh!! The stupid game won't let me fix the Pipe by tying the Oily Rug around it!! Any suggestions as to how to get round this or fix it??? It's driving me insane...

OMG never mind, I realised that you have to turn off the Valve before tying it on... >_>

Have you given the witch everything she needs to make the Matrimonial Potion? "Something old, something new, something borrowed, and something blue".

If you're still missing the new clothes, have you tried checking out the vending machine? The Trau Bee from that machine is terrible! Complain to the vendor in the building next door, and he'll give you something better in exchange.

Although I can't show you a picture, I will do my best to describe it for you to remove any confusion :)
There are two Switches and two Levers inside the Tunnel area. The Switches control which track the cart will follow, either left or right. The first Switch is in the middle of the top track. The second Switch is in the middle of the bottom track.

To crash the cart the first time, set the top Switch inside the Mine so that the cart will go right. Make sure the Cable is attached to the track. Go to the Tunnel. Pull the lever on the ground to set the cart moving and Nick Toldy will declare that "The cart's gone--crashed, it sounds like." You'll know you have it right when you can pick up the Coal from the collapsed tunnel inside the mine.

You can find the Chain in the swordsmith's shop. Use the Spear to knock over the chandelier hanging from the ceiling. The Chain will fall to the ground along with the Wheel, the Candles, and the Hook.

By the way,if you press "Print Screen" you can actually take a screenshot of the screen. then open up paint and press CTRL and V at the same times and it'll paste it to the program then save it as jpg or whatever you want. Then you can put the screenshots here.

Maybe it's evident for some other players, but I was pretty surprised to see that the game was full of Hungarian puns/references. Nick Toldy is the hero of an epic poem by János Arany, a 19th century poet, and "Rhonda Ghonos" literally means 'Ugly Evil', not to mention the knights' names.

The game was a little bit long.

I noticed that, after you finish the game, there is a button labeled "sound options" (above the label "sound options") that should really be "replay final scene."

I seem to be stuck escaping from jail...

I've chiseled through the portcullis and walked to the end of the tunnel. Where is the rope I'm supposed to click on?

If you walk all the way to the end of the tunnel, you stop at the bottom of the well. Running vertically down the middle of the whole well is the length of rope. You can click any part of it to climb up to the surface.

If it's difficult for you to see, just move your cursor around the middle of the well. The mouse will change to a red arrow with the word "Rope" underneath.

Trinn, thank you for the response! I think I must have hit a glitch.

I did click on the well a couple times before getting arrested, maybe that caused it somehow.

If only I'd thought to save sooner...

You need to ask the guard for water before they lower the bucket...he'll want you to put the tin bowl on the little shelf. Then, the rope will be there.

@Anonymous: Oh, thank you! Not a glitch after all - I missed a step.

Where is the OLD SIGNPOST?

It may be difficult to see because of the dark scenery, but it's a small wooden sign behind the far right grave in the cemetery.

@Xheia
I second that!
I managed to finish the game and got to the ending movie scene only to discover my sound wasn't working, so I ended up having no idea what was going on in the epilogue scene. Ughhh! So much wasted work for nothing! I would've loved dearly to have a replay ending clip button and know what I missed Dx