I think I'd make a pretty good mobster. I look great in a flattering pinstripe suit. I talk with my hands (and out of the corner of my mouth). And while I don't know that my inherent Canadian politeness would let me call anyone a dirty rat, I could say that I am very disappointed in them, which is, like, way worse. So I think we're pretty primed to play the hidden-object adventure from 5 BN Games New York Mysteries: Secrets of the Mafia, and let me tell you guys this game is amazesauce. Set in the '50s, New York has suddenly had a lot of its prominent mob bosses go missing, leaving behind only a mysterious green liquid and an equally mysterious butterfly. Less mobsters means less crime, right? But the problem is, children are going missing too... and each of them has drawn the same butterfly before vanishing. As the story begins, you, a reporter, have arrived at the scene of the latest disappearance, the Museum of Natural History. You're following a phone call from a man named Bishop who claims to want to hire you to write an article on the disappearances, but he clearly knows more than he's letting on. Will you survive uncovering the truth? With clever puzzles, a rock-solid and creative storyline, and stunning visuals, New York Mysteries: Secrets of the Mafia is a fantastic game any casual game fan needs to make a date with. 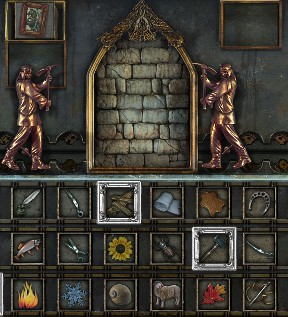 What's most surprising about Secrets of the Mafia is how intelligent its gameplay is. At the start, you can individually customise everything from how long hints take to recharge, to whether you want indicated interactive zones, to whether you want the map to show you where you need to go next, and much, much more, going far beyond the simple arbitrary easy/hard offerings of other games. As usual, you'll be scouring areas for items to use and solving hidden-object scenes and puzzles, but Secrets of the Mafia keeps you engaged the whole way by feeding you clues and scenes that advance the story. Hidden-object scenes tend to be contained puzzles, where every item you track down needs to be used to unlock the next up to a final contraption to get what you're looking for, and as a result, you find yourself doing a lot more thinking and a lot less mindless clicking. While the game does indulge in some tedious busywork, such as sending you to find a specific item to clear away a thin layer of cobwebs, most of the puzzles are fairly creative and mentally engaging, even down to a Doodle God-esque contraption. The heavy focus on puzzles, in fact, makes Secrets of the Mafia a seriously meaty game, with hidden compartments, ancient mechanisms, and many more challenges coming thick and fast. The downside is that the interface can be a little fiddly, requiring precise clicks to pick up or use some objects, and some puzzles suffer from unclear mechanic explanations. 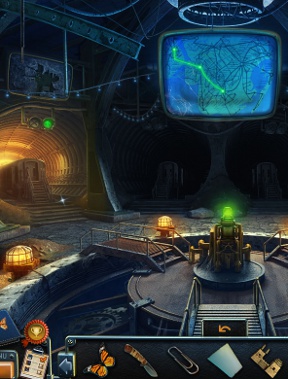 Where Secrets of the Mafia absolutely shines, however, is in its story, that turns out to be far more creative and complex than you'd suspect at first blush. It almost does a disservice by presenting itself as such a basic straight-laced noir mystery that a lot of people will just pass it by. The story just keeps twisting the more you play, and while a lot of it is admittedly sort of cheesy, the game's sense of drama and mystery combined with the way it keeps whisking you to new and interesting locations will keep you hooked. It looks great too, with beautifully detailed environments and characters, as well as largely professional voice acting. (Apart from one particular soul who delivers all their lines with the weird pauses and emphasis of Captain Kirk.) Even the cutscenes look and feel professionally animated, with characters that move and emote realistically, and some genuine tension. It's also a long game to boot, with eight hefty chapters in the standard edition (and a bonus chapter for the Collector's Edition) that will provide a lot of entertainment.

I've played a lot of hidden-object adventures over the six years I've been working for JayisGames, but few of them are honestly memorable the way New York Mysteries: Secrets of the Mafia is. It was in every possible way an unexpected delight, and makes 5BN Games a developer we should hope we see much, much more from in the future. Do yourself a favour and give the demo a try... it just might surprise you in the best possible way.

Cool game. I've grown tired of most HOGs, where the hidden object scenes themselves are usually my least favorite part. At least for me, there's nothing especially fun or rewarding about being forced to find a bunch of random junk in a pile: it's illogical (haven't these people ever considered hiring a cleaning service?), it takes me out of the story, and it slows things down. Mostly it just seems like lazy design, and even the best HOG developers (like Elephant) don't seem entirely immune to it.

This one's different, though. When the HO scenes appear, there are no piles of random junk, and every object has a purpose, even if it's just to help find the next object. The overall effect is more like a series of clever mini-escapes. I'ma write to Big Fish and say, "More like this, please. (I'll tell them JiG sent me!)

I agree with you about most hidden object scenes and I also dislike messily anachronistic piles of junk. I've really enjoyed the Dark Parables and Snark Busters series because you're searching for fragments, each of which come together to make something useful. Maybe you'd like them too?

Depending on the kinds of stories you like, I'd also recommend either Botanica or Enchantia, just as a start; there are a lot of good non-junkpile games to pick from here on JIG!

Thanks, Elle. I've played a few of the Dark Parables and Snark Busters games but wasn't familiar with Botanica or Enchantia...they look good! Some of my other favorites from Big Fish (not all technically HOGs) are the Dream Chronicles, Awakening, Drawn, and early Azada games. The storyline itself is't even all that important to me -- let's face it, most of these stories are pretty silly -- but decent puzzles and a relative lack of busywork are a must. :)

Ah, Drawn! My favorite of them all! I wish they made more like it. For Azada, I enjoyed some more than others. You're right about the silly stories...but sometimes silly story is just what's needed to unwind and put real world problems behind, am I right?

1,407 Views
4 Comments
chrpa— Jayisgames needs your help to continue providing quality content. Click for details Hi! Weekday Escape and Weekday Puzzle are here! Two holidayish state escapes by Selfdefiant are lazy and simple, and then comes Coconuts Park with another episode from...  ...

1,021 Views
1 Comment
chrpa— Jayisgames needs your help to continue providing quality content. Click for details Welcome to Mobile Monday! Nicolet is back with everyday story from their world inhabited exclusively by rodents (and little cute birds). After a while is a new...  ...